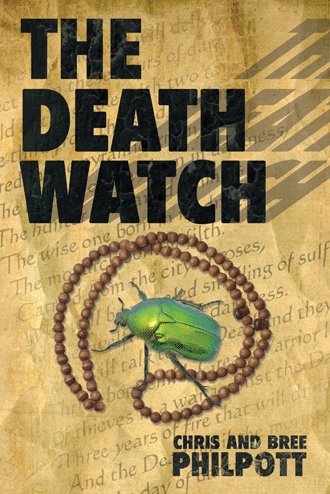 Chapter Seven: The Encounter By the River

Vera and Josh ran hard through the woods, trying to follow the boar while staying well away from the Dead Things. They couldn't see the boar any more and its squealing was becoming fainter and fainter. They had been running for a long time now, and Josh was struggling to keep up.

Vera stopped suddenly, seeing something that looked out of place. It was a mark painted on a tree in red -- the letters "UA" with a circle around them.

Josh came up beside Vera and stood there, panting. He saw the paint markings and it worried him. He'd heard his father cautioning the others about it.

Vera glanced over at Josh, and thought for a moment. It was very quiet except for faint squealing in the distance.

Vera started running again before he could argue. Josh followed as quickly as he could.

Vera had only seen those UA signs twice before. Both times she'd been with her father and both times they had turned around immediately. He'd said the signs -- she remembered he called them 'tags' -- were territorial markers. "Whose territory?" she'd asked. "Men you really don't want to meet," he'd answered with his usual lack of detail. Now she wished she'd pressed him on it. Did these men have guns like the military? Would they just shoot without wanting to know anything about them? Had they laid traps for people they thought were intruders or enemies? Her eyes darted everywhere -- but she didn't know what to look out for. At least with the Dead Things you knew what you were up against.

After running a while, Vera noticed that Josh was having trouble keeping up with her. "Stay close!" she warned him.

“I will," he panted. But he kept falling further behind.

Vera kept going at a fast clip, tracking the boar and scanning the landscape for Dead Things and any other threats, when she realized Josh was no longer right behind her. She stopped and waited but he didn't appear.

"Josh?" she called out as loudly as she dared. All was quiet. She felt panic rising within her.

Finally, Josh climbed out of a gully behind her. She sighed in relief. As he caught up to her, she surveyed the horizon through her binoculars. Then she lowered them and looked at Josh intently. He met her gaze, but sensing what was about to come, he looked away.

"Look, Josh, you do know you’re going to have to toughen up, right? Hunting is something you’ve just got to do to survive out here."

"I know," he said. He hastened to change the subject. "Can you see it?"

She shook her head.

"Maybe we should just let it go?"

"No way. That razorback could run around for days squealing, bleeding, getting every Dead Thing in twenty miles coming around. Plus -- I'm hungry."

Josh remembered something. "I saw a patch of wild onions we could eat right back there," he volunteered helpfully.

Vera shook her head again. "That was death camas."

Josh was puzzled. "Wait -- those plants under the birch trees there? No, that’s onion, isn't it?"

As Vera searched for signs of the boar, Josh walked to the plants, crouched down, broke off a piece and sniffed. It was a delicate smell. A hint of onion -- but also of lilies. Vera was right -- it was death camas. Josh wiped his hands on his pants and stood up. He was impressed. They had passed the camas in a flash and yet Vera had correctly identified them even on the run.

Vera bent down quickly to look at something. "There!" she exclaimed, pointing to a smear of fresh blood on some leaves.

They resumed the hunt, moving quickly together through the woods. Vera paused to look through her binoculars.

"Do you see it?" Josh asked her eagerly.

She didn't answer. She had spotted a Dead Thing up ahead, walking to the right. And another Dead Thing headed in a similar direction. A third was farther off but headed their way.

She lowered her binoculars and did the mental math.

Josh had no idea what she was doing. "What?"

"It should be over there," she replied slowly, gesturing toward the spot with the binoculars.

Josh nodded and drew one from his belt. His mouth was dry. Vera began to run and he followed. It was easier for him to keep up now, because his sister was moving more slowly. The woods were darker here, the land was hillier, and the bushes were thicker. They slowed to a walk. They were both nervous now. It was much harder to see at a distance here. It was as though the woods were closing in around them. Vera didn't like it at all.

Josh strained to look and listen for Dead Things. The trees made creaking noises all around them. He kept turning around, trying to look everywhere at once.

"Have you ever killed a Dead Thing?" he asked Vera.

"No. Dad says always use the yantok when you can -- stun, rather than stab -- because the sight of blood, even their own, drives them crazy."

"Wow," Josh said, digesting this information. "How many have you fought at once?"

"And how many did you see up ahead?"

She didn’t answer. Suddenly, Josh felt terrible. "I screwed this up bad, didn’t I," he said miserably.

Vera shrugged. "Everyone makes mistakes when they start out, Josh."

"What were your mistakes?"

Vera scanned the forest. She had a feeling there were more Dead Things nearby – but where? When her brother’s question finally registered, she couldn’t think of an immediate answer.

Josh slumped. "You didn’t make any, did you?"

Josh wasn't buying this. "No wonder Dad never wants me to leave the compound. I’m a screw-up."

Before Vera could answer, they heard the hideous wail of the Dead Things. They froze. Josh was worried.

"They do that when they’re excited, don't they?" he whispered.

Vera looked to her right. About thirty feet away there was a Dead Thing, which was fortunately walking the other way -- it hadn't noticed them. She looked left...

"Maybe we should go back," Josh breathed.

Then the wailing stopped.

Vera had an odd look on her face. "They're coming," she said very softly. She pointed but when Josh looked, there was nothing there. Vera got behind a tree.

Josh was puzzled. He couldn’t see anything. "But… there’s nothing there," he whispered.

The urgency in her voice made Josh realize that this was serious, though he didn’t understand why. He quickly ducked behind a tree and then peeked out from behind it.

About fifty yards away, a Dead Thing appeared, climbing up into view over the crest of a hill, walking toward them. Then another and another until there were seven. Josh gasped. He looked at Vera. How could she have seen them coming?

Vera looked at the Dead Things approaching and felt a sinking feeling in her stomach. This was bad.

The Dead Things drew closer. Vera and Josh stayed perfectly still, fervently hoping that they were hidden well enough that the Dead wouldn't notice them – and at first, it seemed like they wouldn't. The first Dead Thing passed them without seeing them. Then the second, third and fourth...

In this fast-paced adventure, a teen on the run years after the zombie apocalypse finds herself in grave danger when she discovers a stunning truth that might be the key to humanity’s survival.

Twelve years after the dead rose and civilization ended, Vera White and her family remain hidden deep within the woods—and not just from the dead. Seemingly destined to a life of solitude, sixteen-year-old Vera and her family rarely venture outside their “safe zone.” But when their food supply runs short, Vera decides to take her younger brother on his first hunt, where she makes a shocking discovery: Josh seems to have power over the dead.

Vera’s discovery sets a wild chain of events in motion that throws their family into turmoil and provides Vera with her first glimpse of the bizarre new world that has evolved outside the woods. After she meets Hayden James, a young soldier who is her guide in discovering this world, new questions arise. Can she can trust Hayden? Are the dead changing? Why is the military so interested in her family? What is the Crone’s Prophecy? And why is everyone she loves keeping secrets?

Chris Philpott is an award-winning screenwriter, director, and magician. Bree Philpott is a former lawyer turned musician and copywriter. Chris and Bree live in Los Angeles, California, with their teenage daughters, dog, and parrot. This is their first novel.