A Global Solution for the Protection of Inventions 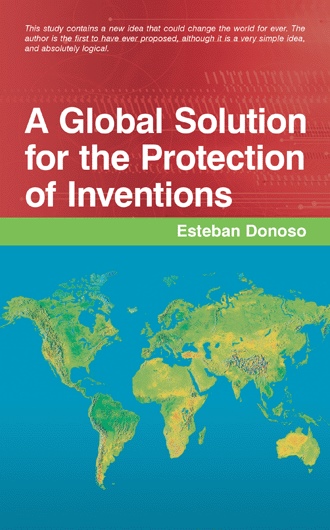 Concerning intellectual property at the current international scenario, there is an issue that has polarized humanity forming two different groups of opinion (identifiable by their different economic conditions). This polarity can be recognized with opposite expressions identifiable with each group, such as: “developed”, “inventive” or “industrialized” countries; and “third world” “underdeveloped”, or “developing” countries. (…)

The proposal contained in this document aims to bring these two opposing views closer together. (…) With this goal in mind, this study has been divided into two segments. In the first segment (which is also the first chapter) the malleable legal nature of intellectual and industrial property in general and specifically of patents, is briefly analyzed. In this first chapter as well (…). In the second segment (corresponding to the second chapter) the product of the above mentioned evolution (the international instrument governing the matter) is examined and the introduction of a corrective proposed therein. Also in this chapter a remark is made in regard to the compatibility of the central proposal of this study (which is the insertion of proportionality regarding the contribution of each country or region to the world´s technological development, measured in years of exclusivity), with the principles and objectives of the global agreement governing the matter such as: free trade, technology transfer and the least possible market distortion produced by uneven protection, etc. The second chapter concludes that such an insertion is plausible and possible, and that it would enhance these principles.

While the analysis develops in the first and second chapters (especially in the second chapter), the central hypothesis of this publication is proposed. It consists in correcting the deficiencies that exist in the current system, by introducing a differentiated protection period granted by a patent according to the economic capacity of each country. With that objective in mind, the study of the global agreement governing the matter is addressed and studied under the scrutiny of Legal Trialism. As it was established in the initial concept note, according to this legal philosophy in order for a given regulation to have an optimally impact in society it must be: a valid rule (meaning that it is applicable), a just rule (which is the axiological aspect and the ultimate goal of every regulation) and an effective rule (an element that is related to its practical application).

This book proposes (in the second chapter) an essential or central corrective (which is considered irrefutable and necessary) to make the global agreement governing the matter a just and effective scheme, and other numerous secondary corrections that derives from it, which are considered relevant only in application of the first mentioned. The main proposed corrective consists of introducing (in compliance with the current regulation) a differentiated term of protection granted by a patent (the principle of proportionality), accounting for the economic capacity of the different countries. This will have a positive impact in the justice and effectiveness of the regulation. The second chapter also shows that the validity of the agreement governing the matter is imminently universal, concluding along with it that on the basis of a fairer system (one that will be accomplished upon the introduction of proportionality), the efforts that so far have set these regulations as virtually universal should continue (as it will be shown, this goal is very close to be fully achieved).

The objective of this proposal is to optimize the regulations on the subject to achieve a greater positive impact on society at a global level, accounting for the concerns of both developing countries and developed countries. Along the second chapter the possibility of the inclusion of the proposed corrective into the current system is also addressed. To this end the suggested amendment is analyzed (which will make the proposed corrective viable) as well as its compatibility with two basic principles of the invention protection system: “National Treatment” and “Most-Favoured-Nation treatment.”

This study demonstrates that the implementation of a universal and harmonized system built on the base of the principle of proportionality, will produce a more just and effective worldwide scenario for the protection of inventions. This will result in an increase of the investment on research and development, while avoiding distortions that so far have been caused by the non-compliance with the rules of this system. Furthermore, this study argues that by strengthening patents as a universally recognized and accepted right (not only in the law but in the minds of human beings), intellectual property in general will be consolidated as a worldwide expression of ownership. Although not all conclusions that this study offers for the patent system are necessarily applicable to other types of intellectual property, many recommendations are here stated are. Moreover, the introduction of the proposed corrective for the patent legal system, will positively impact in the effectiveness and consequently in the recognition of intellectual property in general. (…)

Due to the universality of the addressed issue, this study does not refer to Ecuador’s Law (the author’s country), Andean Law or any other specific national law, more than in an incidental way and only when an example serves to illustrate a particular point. This document is intended as a criticism of the international system of patents and the global regulation that contains it. Any study about the justice, validity and effectiveness of the regulation for the protection of inventions that is confined to the internal aspects of each country will run short, being that this regulation has transcended national borders.

Thus without any doubt it is vital to consider the concepts disclosed by authors that have engaged the subject from a global perspective, which are reflected in the international doctrine within which Carlos Maria Correa stands out. (…)

Following Habermas, this study has taken inputs made by two renowned economists in regard with the problematic it address. The first, Joseph Stiglitz, is a courageous intellectual, Nobel laureate in economics and world citizen in the broad sense of the term. As he says in the acknowledgments of his book Globalization and its Discontents (his book is repeatedly referred by this publication), his parents instilled in him a duty not to remain silent about obvious injustices, and so in a sincere account (based on a well informed criteria due to that among other high positions held, he was vice president of the World Bank), he made public his objections to globalization and criticisms to international organizations influencing in it. It should be said that more than an economic study (even though when he comments about economic issues he does it with irrefutable academic strength), Stieglitz’s account provides a reliable source (first hand) of how diplomacy in the international arena works. While doing so he states accurate opinions that invite to consideration. The second one is Allan Deardorff who in a well founded study (in this case strictly economic), provides an interesting scientific perspective regarding the protection period of patents.

Using these conceptual paradigms as the basis of the analysis, a viable and just alternative is proposed for the patent system. This study as it contains a new proposal is not intended to provide unequivocal answers about the issue it address, nor an irrefutable approach. There is still a lot to discuss about patent protection. An interdisciplinary method will be the key to success in order to build conclusive answers.

Is the current global legal system for patents really universal, fair, and effective? Author Esteban Donoso addresses this question in A Global Solution for the Protection of Inventions.

Sharing the results of an extensive study, Donoso analyzes the legal nature of intellectual property, industrial property, and patents and reviews the evolution and background of the current global legal scenario of the protection of inventions.

The study also identifies the main flaws, strengths, and virtues of the current system and examines the international instrument governing patents. Donoso then introduces a corrective action plan and addresses the compatibility of the proposal in regard to free trade, technology transfer, and the least possible market distortion.

A Global Solution for the Protection of Inventions seeks to correct the deficiencies that exist in the current patent system by introducing a differentiated protection period granted by a patent according to the economic capacity of each country and demonstrates that this action is necessary to make the global agreement governing the system just and effective.

Esteban Donoso earned a master’s degree in law, is a university professor at PUCE Quito-Ecuador, is an associate in the legal firm Corporación Legal CL Ecuador, and is president of the NGO Pro Humano Genere. He is a lawyer committed to achieving universal justice through global legal systems.