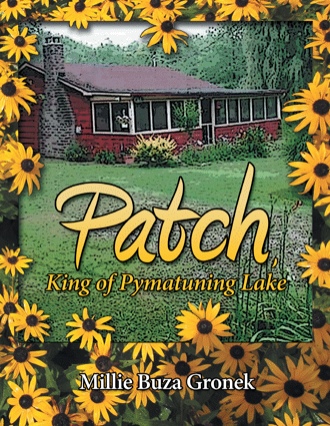 I was very ill when I first met Patch, but that’s a story I will tell you another time. I wanted a companion to get me out of bed in the morning—someone to take care of. So, off I went to the newspaper ads, no Internet as this was some time ago. Cockapoo puppies! Now that’s what I wanted and I ventured out to meet one. As I arrived, I noticed some skittish dogs in the kitchen. They were the parents, but I wasn’t really well enough to look much further. Then, I met their son “Paws”. He was a little black darling, or so I thought, and I took him home.

On the ride home, the little “darling” slept and I noticed the white patch on his chest—hmm, unusual for a purebred Cockapoo, but I’ll change his name to Patch. All seemed to go well until that night. I cuddled up to my new pup and heard: “Grrrr!,” a sound warning to back off. Well maybe it was only his first night in a new home that prompted the angry response. The next day will be more promising.

The days went on without much improvement, but it was summer and cottage lake season. On the drive from Cleveland to Pymatuning, Patch had the back seat to himself—and he needed it! He jumped from window to window, panting and whining, at least until he found his way into the front seat and into my arms. There he settled down and slept awhile, only getting up every so often to ride “shotgun” near the right front window. He was a sentry, sitting upright and bold.

At the lake, his first time there, Patch met Mocha—King of the Lake. As soon as Patch stepped out of the truck, Mocha ambled over. “Hi there, young fellow. I’m Mocha, King of the Lake. Stick with me and you will have the best time here. I even have full privileges to Chuck’s Pond. What’s your name, son?”

“What’s it to you, old man? I’m Patch.” Patch said this with some apprehension as Mocha was a Chocolate Labrador the size of a small bear.

“I know your parents well, Patch, and we all get along here at Pymatuning Lake. You will just have to learn some manners.”

“I‘ll be back for you tomorrow, Sonny.” Mocha smiled and walked slowly back home.

It is summer at Pymatuning Lake when Patch the cockapoo puppy is adopted. Smaller than the other dogs at the lake, Patch is an angry little man.

On his arrival at the lake cottage, Patch meets Mocha, a chocolate Labrador who befriends him and teaches him the ways of the lake. As Patch learns how to snag hot dogs off the table and dig up rocks in the lake, he soon learned to embrace the summers with Mocha by his side. But one year as fall begins, Mocha nears death and passes on his title as King of Pymatuning Lake to the still-angry Patch. Now only time will tell if the little dog can overcome his irritations in order to cope with his new responsibility, especially after he gets a new sister, Sam, who immediately disrupts his life. As the other dogs at the lake help him, Patch must learn the differences between a leader and a ruler as he struggles to establish his territory and find success.

Patch–King of Pymatuni ng Lake is a tale for all ages about the seasons of life, its joys and its losses as told through a few precious dogs at Pymatuning Lake.

Cornerstone of Hope, a center for the grieving, is now using Patch, King of Pymatuning Lake in its Art Therapy program. They consider it an excellent resource for children and teens grieving for parents, grandparents, relatives and even their deceased pets.

Millie Gronek is a lifelong educator who teaches online English courses for the Art Institute of Pittsburgh. She divides her time between a suburb of Cleveland, Ohio, and Linesville, Pennsylvania, and considers herself an established resident of both communities.