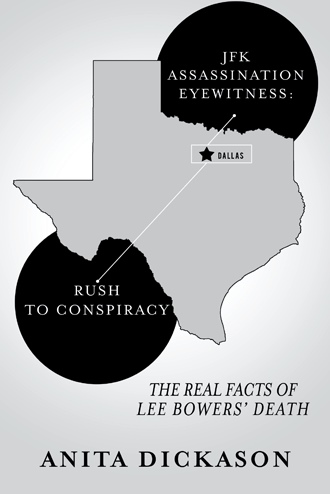 On November 22, 1963, Lee Bowers, Jr. became a key witness to the assassination of President John F. Kennedy. Less than three years later, he was killed in a one-car accident southwest of Midlothian, under mysterious circumstances. His name was added to a list of individuals associated with the investigation of the Kennedy assassination who had allegedly died under suspicious circumstances. A few months before his death, Mark Lane interviewed Bowers for his book: Rush to Judgment. Bowers’ statements in the Mark Lane interview, plus the conflicting information regarding the accident, added fuel to the conspiracy theories. Was Bowers killed because of what he saw on the day President Kennedy was shot and killed? Was there something unusual regarding the car accident? Was his car run off the road by another vehicle? Was he able to talk to ambulance personnel and did he tell them he had been drugged at a coffee shop prior to the accident? Was he in a strange state of shock? This is a forty-seven year-old mystery that involved a motor vehicle accident.

As a retired advanced accident investigator, I conduct cold case accident investigations. I had not heard of the Lee Bowers’ case until I was contacted by Indigo Films regarding a new series: America Declassified. An episode on JFK was going to include the Bowers’ accident and I was asked to participate in the episode. I had only a short time for research prior to the taping of the show. The details I was able to identify left me with more questions than answers. What were the real facts behind the Bowers’ accident? Finding the answers meant attempting the reconstruction of a 1966 accident. A full cold case accident investigation would certainly push the limits on identifying any pertinent details of the accident. The research became every bit as difficult as I anticipated and continued for several months after the completion of the segment for America Declassified. The Bowers’ accident developed into the type of case I categorize as an “investigative hook.” It’s a case that grabs you and does not let go.

The methodology I developed for cold case accident investigations would need to be modified for the investigation of the Bowers’ accident. The typical elements in a cold case accident investigation were missing. I did not have an accident report. I did not have a vehicle to assess damage, direction of force or impact points. Initially, even the accident site was a major issue as I discovered the site selected by the fi lm company was on a relatively new section of highway that did not exist in 1966. My research would have to extend beyond the normal scope of an investigation. It would need to include an assessment of existing documents and publications for information on the accident. The necessity to factor in the 1966 Texas Traffic Laws would further compound the difficulties of the research. Considering the controversy that has swirled around the Bowers’ accident, I could not ignore the events of Bowers’ life that led to the controversy. Researching the past life of an accident victim is not typically part of the analysis of a cold case accident investigation. Investigating a 1966 accident with a lot of missing information is also not the typical case. I soon realized, however, Bowers’ background and the events leading to his death were intertwined. It was not possible to evaluate the accident without considering the totality of the life of Bowers, the role he played in the investigation of the Kennedy assassination, as well as the events surrounding the accident and his death. To state these were extreme difficulties would be an understatement at best.

JFK ASSASSINATION EYEWITNESS: Rush to Conspiracy is a step by step progression of the research and the analysis of the results with elements of Texas history thrown in along the way.

The findings uncovered an unexpected twist in the aftermath of events of Lee Bowers’ death on an August morning in 1966.

On November 22, 1963, Lee Bowers Jr. became a key witness to the assassination of President John F. Kennedy. Less than three years later, he was killed in a car accident twenty-seven miles south of Dallas near Midlothian, Texas, under mysterious circumstances. Was it just a simple car accident, or was Bowers killed because of what he saw on the day President Kennedy was shot and killed?

In JFK Assassination Eyewitness: Rush to Conspiracy, author Anita Dickason, a retired accident investigator, provides a step-by-step look into the progression of the research and analysis of the accident details, treating the matter as a cold case investigation. She shares how questions regarding Bowers’ death have added fuel to the JFK conspiracy theories in this decades-old Texas mystery.

JFK Assassination Eyewitness: Rush to Conspiracy examines the details of Bowers’ mysterious accident while providing a look into Texas history. Dickason’s findings offer an unexpected twist in the aftermath of the events of Lee Bowers’ death.

Anita Dickason is a retired advanced accident investigator with a total of twenty-seven years of law enforcement experience, including twenty-two years with the Dallas Police Department. She has two grown daughters and currently lives in Texas.