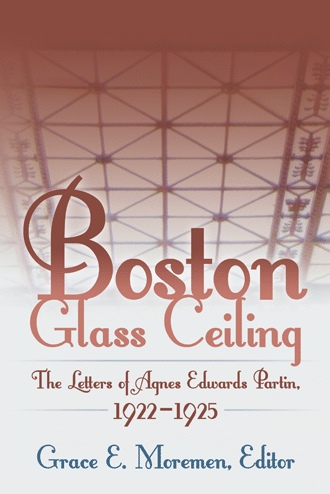 There was no doubt that 23-year-old Agnes Edwards had ambition. It stemmed from the self-confidence she developed during her years at the University of California at Berkeley, where she had supported herself as a secretary, was elected to Phi Beta Kappa and graduated with highest honors in English. And, like many American women of her generation, she was feeling a new sense of empowerment from having been able to vote for the first time in the election of 1920. Agnes’s professors had encouraged her to pursue an intellectual career, perhaps in publishing, perhaps in teaching. And she knew she had the ability to earn her own living.

So it was, in the fall of 1922, that Agnes journeyed to Boston. Tucked securely in her handbag were letters of introduction from influential people: Water Morris Hart, (Dean of the Summer Session, for whom Agnes had worked for four years), Chauncey Welles (Professor of English), and Mrs. May Cheney (University Appointments Secretary). Agnes was more excited than apprehensive. She knew what she wanted: a chance to be recognized and succeed as a writer and editor. She also knew what she did not want: being stuck in the quagmire of stenography for the rest of her working life. She had had enough of that at Berkeley. Dean Hart had a doctorate from Harvard, which carried considerable weight, especially in Boston. Agnes was counting on his recommendation to give her the entrée she needed into the new world she sought.

Agnes usually wrote to her parents twice a week, detailing her day-to-day life, just as she had during her years in college. Mother and daughter eagerly anticipated the other’s letters and both worried and fretted when they did not arrive as expected.

It was dark before [the train] got to Boston . . . so I didn’t see much of it. We were over an hour late, too. When I got off I looked for a porter but didn’t see any, so staggered up the steps, & just as I got to the top a girl caught up with me and asked if I were Agnes Edwards. Then another one appeared & I was safe. The poor kids [sorority sisters in Alpha Gamma Delta] had had a long wait for me. One of them had a date & left & the other got a taxi & we were soon here. She hadn’t had anything to eat either so we went to a drugstore & had some sandwiches & pie, talked a while & then I was glad to tumble into bed. . . .

St. Stephen Street is really in a very good location. We are very close to a number of important buildings such as Symphony Hall, where the big concerts are given; the Opera House; the Horticultural & Mechanical buildings where exhibits of all sorts are held; the YMCA & YWCA; Mother Eddy’s Christian Science Church (the first one in the U.S.; it is very large, & has chimes which sound almost exactly like the Campanile chimes); & then there is a park near & it isn’t far to the Charles River along which there is a long & pretty walk called the Esplanade. On the opposite shore are the buildings of the Mass. Institute of Technology. The river is a large one but they say it freezes over so people skate on it. Boston University, where all of these girls attended, has no campus at all, & the buildings are scattered absolutely all over the city. It doesn’t seem like a college to me at all. There are 10 sororities but none of the others have even as much “house” as this.

At first I tho’t it would be awful to have to eat all our meals out but it won’t be. There is a drugstore just around the corner where the girls get toast & coffee for 15 cents—you can have more if you want it, of course. And there is a café over the store where you can get a good dinner for 50 cents. I’ve been getting a good lunch for a small amount downtown, & figure that I can live on $1 a day for food for awhile at least. However, my appetite is growing, & I weigh 96-1/2. That’s pretty good, I think.

Sunday morning I unpacked. Things were in a regular mess in my trunk. The poor things had certainly been banged around, for one of the side hasps was entirely gone. However the card I pasted on with my name was still there. . . . I took out practically everything I tho’t I’d need & the trunk is stowed away in a hall closet. Have my pictures up & my books out, so feel settled. Mildred & I get along very well, altho’ she is not the kind that I could ever be awfully chummy with. I imagine she’s younger than I, but considerably larger. She keeps books in a brokerage office and she’s engaged to a man called Bill. The girls really are all as dear as can be & are doing their best to make me feel at home. . . .

Then yesterday my fun began. Armed with all my letters, I set out before 9 & didn’t get back until 5 & I know I walked 20 miles. First I went to the Women’s Industrial & Vocational Union[sic] in order to get a general line on things. [Agnes had a letter of introduction from May Cheney at U. C. to a Miss Jackson, who was out sick], but one of her assistants was very sweet & gave me a good deal of information [and told Agnes to come back later in the day when a Miss Norton would help her]. Then I went to the offices of Ginn & Co., where I was fairly sure of a good introduction. It even surpassed my hopes, however. Mr. Thurber, one of the officers of the firm, knows Dean Hart well & had apparently heard more or less about me. First I went to his secretary, Miss Wheeler, to whom I had a letter. She was very nice, & took me to see Mrs. Thomas, the geography editor. . . . She was lovely too, & then Mr. Thurber arrived. He is a great big man, very hale & hearty, & had just returned from his vacation so was in a splendid good humor. He was much surprised when I was introduced & said “Is this that girl?” [because of]. . . my youth & small size. I talked to him a long time, & I could have had some stenographic work or some work in the music department helping prepare manuscripts for publication. But I didn’t want to do anything definite until I had at least looked up all the people to whom I had letters. Perhaps I only imagined it, but I tho’t his manner changed when I didn’t accept at once. However, I am pretty sure that if I go back there’ll be an opening for me. They have nice offices, a splendid reputation, etc., but of course they publish only textbooks & that isn’t the line I’m after.

After 1:00, I started again but didn’t find anyone in until 2, when I talked to 2 women of the Atlantic Monthly Publ. Co. Their magazine is absolutely the most highbrow & most perfect that there is, and they publish only a high grade of books. To my joy, one of the women, who is their office manager, said that within 2 weeks there are apt to be 2 openings, one as secretary to one of the editors & the other in the editorial department. She seemed rather impressed by my letters & experience, and even tho’ the salary would only be about $25 a week to start with I believe I’d sacrifice some money to be connected with them. They are in an old stone mansion facing the Boston Public Gardens.

After I left there I went to Houghton Mifflin . . . I talked to the woman who does the hiring, and although she was very kind, the only place they had open paid $20 a week & I couldn’t quite bring myself to take that. However, I left my name there too.

Then with a good many misgivings, I approached the literary editor of the Boston Transcript, the best paper of the city. He proved to be quite approachable but has a more or less a one-man job . . . . [I was then introduc

There was no doubt that Agnes Edwards had ambition. It stemmed from the self-confidence she had gained during her university years and from being in the first generation of women to vote. Her professors at the University of California–Berkeley had encouraged her to pursue a career in publishing or teaching. What’s more, she knew she could support herself with her secretarial skills and job experience. So it was, in the fall of 1922, that Agnes left her home in California and journeyed to Boston.

Through three hundred letters, she tells the story of her ambition to become an editor and writer at Boston’s prestigious Atlantic Monthly Press, along with the challenges she faced in finding her way in the male-dominated field of book publishing. Both triumphs and disappointments awaited her in the city, as well as an unexpected romance. Going abroad in 1925, she interviewed several authors, including A. A. Milne, creator of Winnie the Pooh.

An entertaining record of one woman’s life through the early- to mid-1920s, Boston Glass Ceiling provides a personal and detailed glimpse into Boston at that time and offers keen insight into the publishing world from a woman’s perspective.

Grace E. Moremen earned a bachelor’s degree in international relations from Pomona College; a master’s degree in religion and literature from the University of Chicago and a masters degree in history from UC Berkeley. She has authored and edited several books. Moremen and her husband, William, live in Claremont, California. They have three grown children.