The Protocols of Ambiguity

by B. B. Jacobson 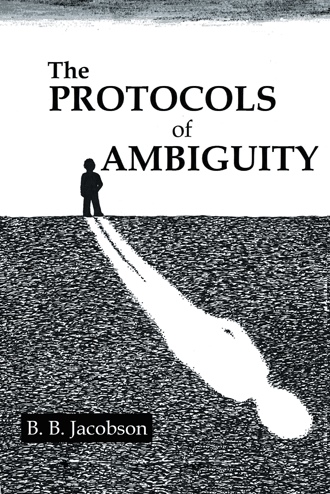 On the seventh night of a Holy Ghost revival a six-year-old boy has just received the Gift. He is autonomous, he is content, and he is speaking in tongues. He’s been told the Gift would lead and guide him into all truth.

While instability, confusion, and rage surround his family and home, the boy grows older and must experience unthinkable acts of violence, and the uncertainty of moving from place to place. The troubled boy seeks refuge in books and learning but oceans of questions flood his mind and he is forced to reckon with a world of myriad coexisting, coequal truths.

As years pass, he begins to receive “visitations.” Unwilling to seek council regarding these occurrences, deeper questions emerge: Is it possible that there be a solitary, absolute truth? Is that truth so obvious that it is obscured only by its sheer enormity?

Author B.B. Jacobson takes you on a remarkable journey into the life of an unassuming boy in this coming-of-age story of how the power of a calling exceeds the affect of circumstance. The Protocols of Ambiguity is a modern day statement that reveals the potency of a planted seed; it defies the mainstream and lays the challenge at the feet of the avant-garde to return to the root.

B. B. Jacobson lives in Alaska where he enjoys subsistence fishing and mountain hikes with his wife and three sons. He is an avid surfer.