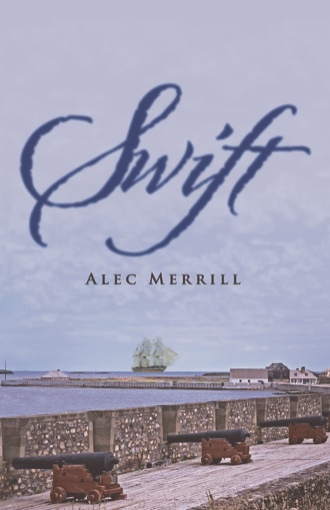 Chapter 01
Meat for the Table

The darkness of the night fluctuated. One moment, the quarter moon wanly illuminated the ground, while in the next scattered clouds blocked any light. He had to be careful. It had been a very dry summer. The leaves on the trees and foliage on vegetation closer to ground were dry. So dry, that his father was worried the crop harvest might not be enough to pay the rent for the farm, let alone provide enough food to last until next year. Without the game he hoped to bag tonight, the entire family would go hungry; if not immediately, then in the not too distant future.

Jonathan Swift carefully slid through the brush on the flank of the marsh. His progress was slow; measured, and cautious. Each step or movement was thought out. He avoided brushing against or treading on any dry vegetation which would provide a telltale crackle. Such a sound might give away his position. Worse, it might frighten away any game. He had to be worried about both. He needed meat for the table. Taking game, without permission, from someone else's property was poaching as everyone in the district knew. If caught, it would result in severe punishment.

He could imagine what any tenant farmer in the area would do if someone were caught taking game on that farmer's acreage. The poacher would be lucky to get away with his life. It was simple; the poacher was taking food off the farmer's table. That food could mean the difference between a farmer's family eating or going hungry for a day or two. Most of the surrounding property was long ago hunted out. Even marsh land was now rented, not because it was productive, but because the renter could legally hunt any game found on it. The only land not hunted out was the Squire's property. There were a number of game wardens to ensure it stayed that way.

A few minutes before, he had heard a noise foreign to the natural environment. It was a warning that someone else was about. That other person might be a game-warden from the Squire, as it was his land. It might also be another individual like himself; someone who needed meat for the table. In either case, if he was spotted, it would be a fast, violent affair, not likely to turn out in his favour.

He kept these thoughts in the back of his mind. Of primary concern was eating. He needed food, and that meant trapping meat with snares or being able to shoot it. Snares worked better he knew, but you had to set them and then go back to check them. In between, if they were spotted by a game-warden he could be waiting to ambush you. On the other hand, if they were seen by a competitor, the snare would be emptied if it held game. If there was no game in it, the snare or trap would be sprung or possibly broken.

No one like him had money for a firearm. Even if he did have a firearm, he couldn't use it as the noise would be his undoing. He therefore relied on a slingshot. He was accurate with it, having practiced countless hours. But he had to be close to his quarry, and the quarry had to be rabbit size or smaller for a clean kill.

Using all of his cunning, he soundlessly approached the tree-line marking the edge of open water. After the darkness of the brush, the open area of the marsh was significantly brighter, even though there was just a quarter-moon.

He scanned the open water and glades nearest him, but saw no quarry. There!! About 100 yards to his right there were two ducks. They were motionless on the water and close against the glades. Too far from his current position for any shot. He would need to get closer. But how?

He could go along the bank, but the ducks might see him; or even worse a game warden. Alternatively, he could sink back into the brush, move to the right and then come out directly opposite them. This is what he decided to do.

Quietly he backed into the brush, being careful not to make any noise that would disturb the ducks. The going was slow. He needed to feel every hand and foot location to ensure he was soundless. In this he succeeded, but at a cost in time. Ten minutes later he edged through the brush only to find no ducks. He had heard and seen nothing. So where did they go, and why?

He eased back slightly into the brush. He stuck the index finger on his left hand into his mouth to wet it. Then he raised the finger slowly into the air. The wind was from the west, toward him. His scent wouldn't have been a factor. So then what was?

He slowly lowered his hand, as motion is more rapidly spotted. He decided to back further into the brush. He instinctively knew something was not right. As he started moving, he sensed movement further to the right. He saw nothing. It was more of a sense. One shadow in a bunch of shadows didn't look quite right. Was it a branch or something else?

Caution was foremost on his mind. He looked to his left and to the front. He relied on his peripheral vision to determine if someone was in fact on his right. He knew from experience, that when staring directly at something for awhile, the eye tends to imagine. Using peripheral vision, the eye tends to catch motion faster than when you look directly at the object. And he needed to spot motion as fast as possible. He was scared. Not scared as in terrified, but scared enough that every sense he had was working overtime.

He tried to control his breathing. All of a sudden, his breathing was abnormally loud in his opinion. In reality it was so shallow it appeared that he was either dead, or just another bush.

His eyes snapped to the suspicious shadow again. This time there was distinct movement. It looked like an arm or leg being moved slowly to work out a cramp. But who?

Jonathan decided not only did he not want to know, but he also did not want the other chap to know of his presence. It was time to pull back before being detected. Hungry as he was, he would rather be hungry than get caught.

He resumed crawling backward further into the brush being even more silent, if that was possible. He had gone but ten feet when a branch cracked. He froze. He was in trouble and he knew it. He had not cracked the branch, nor had the shadow. The crack had come from further to his right. There was a third person in the vicinity.

As he watched, the closer shadow moved toward him. It appeared the closer shadow was circling toward the area from where the crack emanated. There was no motion, no noise in that area at the present; just total silence. Just the same, in another ten feet, the shadow would be tripping on Jonathan. He debated whether to remain motionless or run. Neither choice was encouraging. He decided to remain motionless.

The shadow moved closer and then stopped. Jonathan could see him clearly except for the face which was only in profile. The shadow was still concentrating towards Jonathan's right where the noise had originated.

Seconds changed to minutes. No one moved. Then Jonathan saw silent movement from the shadow. He did not register the movement until he heard the click of the hammer being cocked. He dared not move or make a sound, lest the musket be swivelled toward him.

Jonathan had to master the fear that was threatening to overcome him. He stopped breathing. He was motionless, but he was fearful his trembling might be spotted by the man with the musket.

After what seemed like an hour, the click of the hammer on the pan followed by the explosion of the musket's discharge near caused him to wet his pants. The shadow with the musket charged to Jonathan's right. Jonathan, rose to a crouch and rapidly, but near soundlessly skedaddled to his left in the opposite direction to where the shadow was heading...

The summer of 1744 in England is dry; with crops beginning to fail, poaching is the only alternative to starvation, even though it is illegal and carries a heavy punishment. As sixteen-year-old Jonathan Swift carefully slides through dry brush in the dark, he hopes to bag some game to help feed his family. As a branch cracks nearby, Jonathan suddenly realizes he is not alone. Moments later, he manages to shed his pursuer and arrives home, shaken. His escape is temporary, however, and events will soon take a turn that changes the direction of Jonathan’s life forever.

Frustrated when they cannot catch him in the act of poaching, the squire’s men ambush Jonathan and leave him for dead on a Royal Navy ship. Although he has never been on a ship before, Swift finds he is a new member of HMS Winchester’s company. Unaccustomed to disciplined shipboard life and without friends, family, or security, he soon realizes that he must persevere or die.

In this historical tale, a young man pressed into the navy discovers that his destiny is more dangerous than he ever imagined when he finds himself in the midst of an attack on the most formidable fort in North America.

Alec Merrill served thirteen years in the Canadian Forces as an officer. Using this experience in the private sector, he established the training program for the North Warning System which provides NORAD with surveillance and early warning capabilities across the Canadian arctic. Alec completed three years as the Chief of Emergency Services for Fisheries and Oceans Canada which includes the Canadian Coast Guard during events such as Hurricane Juan, and Katrina. He has been a management consultant for over twenty years.