Standing on One Leg 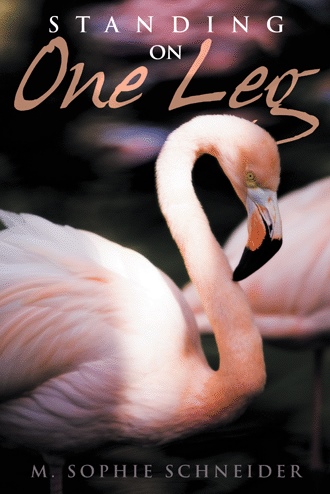 It wasn’t until the day my mother died that the search for my father’s family began. Until then she had forbidden it. She wiped her red, chapped hands, one across the other and said, “What’s done is done.”

So now I sit one sharp pencil in hand listing all the things I knew about him. As I begin to write, she steps on my words, her backless slippers slap slapping across the page and I can hear my father calling out in his heartbroken way, “Is that you Zosha?”

I picture her standing in the middle of my page, her hands on her hips, a cigarette dangling from her lips, one in a long line of broken-hearted women demanding to be seen.

I turn my gaze away. It’s him I want to see.

My intention was to place my thoughts in organized rows the way you would plant a garden, separating the peas from the corn. My father said he was raised on a farm, so I thought this would please him. I pictured him smiling down at me as I sowed my seeds, watered them and watched them grow. But not every life blooms.

And what do I know about planting gardens? My sister Kat and I were raised in the city, our views obstructed by brick walls. We bought flowers wrapped in two day old newspaper or potted in black containers their roots pushing up against the hard plastic. We walked on cracked cement, occasionally bending to pull a wishing weed from the base of one of the oak trees that lined the edge of the sidewalk and leaned precariously towards the oncoming traffic that honked and squealed its way towards the 59th Street Bridge like a flock of geese.. There were red geraniums too, in terracotta pots haphazardly place on fire escapes, their straggly blooms poking through the black railings like waggling fingers. And there were my mother’s roses standing knee deep in water in the hand painted vase that sat on the bedroom dresser, their petals falling one by one onto the unforgiving floor.

Like an early bloom, it was my mother who was supposed to die first. She had cancer. But my father elbowed his way to the front of the line. I could tell you that it was because he didn’t think anyone would take care of him once she was gone, but what I really think is that he couldn’t live without her. In relationships, one person loves more. Whether it is based on need or temperament, I don’t know, but I watched them as I grew up, how sometimes daddy would play his Elvis records and dance around the parlor in his black cotton socks, crooning, “Love me tender…” to my mother, who sat in the kitchen staring out the window at the brick wall, the frayed rope clothesline that stretched across the alley swaying in the wind.

“How bout it Zosha?” he would call as he spun around the floor, his arms wrapped around thin air.

It is not until the day Sophie’s mother dies that the search for her father’s family begins. As Sophie rehashes her childhood over the phone with her sister, Kat, she soon realizes she has more questions than answers.

Sophie hires a genealogist to research her father’s family, but without a real name, information is scarce. Unlike in a mystery novel, there are no witnesses or disgruntled family members, just fragmented memories and a slip of paper found in an old book. As Sophie struggles to piece together the bits and pieces of snatched conversations she heard as a child, she soon wonders whether anyone in her one sided family knows anything-whether their silence is deliberate or habitual. But Sophie is determined to unearth the secrets buried long ago. As she digs into the past, she slowly begins to unravel information that just might lead her to her father’s true identity, and who the other shiny-shoed man was in her mother’s life.

Standing on One Leg is a story of heartbreak and hope that reveals one woman’s journey to the realization that change happens only if she is willing to look at everything in a different way.

M. Sophie Schneider is the designer and artist for Creations from Mars, a line of handcrafted jewelry and whimsical art. She was born and raised in New York City and now lives with her husband in Phoenix, Arizona.