Reflections of a Beachcomber

How to Cope with Disability, Divorce, and Job Loss 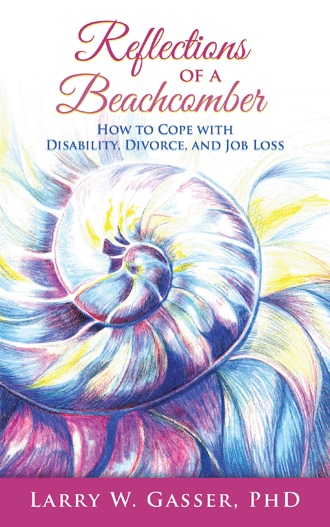 Beach Reflections #32 Any lover of beaches may wonder from where does he get his deep affection for the gulls, sand dollars, rocks, sea wrack, driftwood, kelp and small flocks of sanderlings. The beachcomber reached for some kind of understanding, too, just as the many generations before him reached to grasp the ineffable. In ages past, that part of the human had been laid differently in the liver, breast and head or heart. Affections and attachments were never attributed to the external world. They lay inside, an aspect outside physicality. Perhaps they called it soul, or the heart's core, or even something inspired from thee Gods or the one God or Allah. Like them, his insides seemed drenched in the sea water that constantly cleansed the sand, saturated by the wet breeze that scattered sand against his face as he sat there, blessed him with its sounds of pelicans, gulls or crows, and filled his nose with too many rich scents to catalog. What he knew was that the sea shore caught at him with a love too deep for feeling, too rich to be priced, too deep to be defined. So there he was, fingering a new, quartzite thumb stone of shocking white, rubbing salted sand from his fingers, carefully watching the wash of waves as they reached for him and loving the press of wind to his face. Here, he belonged, heart and soul.

Presenting a tangy mixture of life on a Pacific beach, haiku poetry, and essays on life and living, Reflections of a Beachcomber bares author Dr. Larry W. Gasser’s soul to illustrate his errors of thought and emotion that prolonged his many crises. In this personal collection, he recalls how he successfully coped with job losses, divorce, and three disabling conditions. Reflections of a Beachcomber explores ways of thinking and feeling that lead to coping successfully with disability generally and blindness in particular, linking those coping skills with relationship issues. Gasser combines twenty-five years of teaching college writing and literature and master’s level studies in counseling and guidance with a modern existential philosophy to guide you through many of the major crises life can bring. Through a multifaceted approach Gasser offers ways of working out solutions to personal challenges, explores a practical philosophy of life, and discusses important and valuable experiences in his relationships. He shares his story in Reflections of a Beachcomber to show how you can learn from your experiences rather than being dominated by them.

Larry W. Gasser, PhD, retired from college teaching and disability services management to his home 1,500 feet from a Pacific beach in Westport, Washington. Here, he reads and writes while his best friend and wife, JoAnne, does counted cross-stitch and also reads.