The Miracle on Cooper Street

Lessons from an Inner City 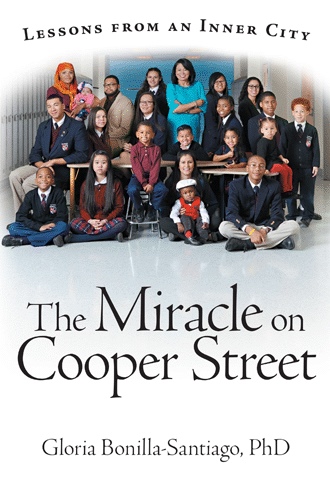 THE MIRACLE ON COOPER STREET

For decades I had prepared for this moment. All my hard work had come down to this one unseasonably warm summer evening in June 2006 when the high school graduation of LEAP Academy University Charter School students was held in the most unlikely place for a Camden public school – a spanking new amphitheater on the Rutgers University campus in the poverty and crime-ridden New Jersey city.

Nearly 1,000 people, mostly black and Latino, fill the amphitheater, hugging and high-fiving each other waiting for the ceremony to begin. They are the parents, family and friends gathered for this graduation of LEAP, which stands for Learning Education and Performance. And the fact they far outnumber the 35 graduating students is an indication of how important this event is in their lives.

Their faces, shining with joy and pride, bring a flush to my face that has nothing to do with the steamy weather. At age 50 and regarded as a tough, no-nonsense Latino academician and social activist, I am not someone who cries easily. That night, however, my tears begin with the first strains of Pomp and Circumstance and continue throughout the ceremony. And unlike many other times in my life, these are tears of joy, for this graduation represents both a major milestone in my life’s work and the validation of my belief that poor urban communities can be transformed through education.

This is, after all, Camden, New Jersey, one of the nation’s poorest, most depressed and violent cities. With its average annual family income of $24,000, Camden exists outside the American strata and miles away from the American dream. Nearly half the city’s children live below the poverty line and have only a 50 percent chance of graduating from one of its subpar public high schools. Those who do graduate usually lack the financial resources or grades to attend college. Instead, they find their options are limited to low-paying jobs, certainly with no access to careers that can break the cycle of poverty that grips their lives.

With little hope of a prosperous future, many Camden teens just hang out on street corners. Some will turn to illegal activities to make a living, and whether they are perpetrators of violence or the victims, the bulk of their time is spent on merely surviving.

But, that’s not the case for these graduates, or for the hundreds who have followed them since, all students who were lucky enough to be chosen in LEAP’s annual Charter School lottery. These students achieved a 100 percent graduation rate and will earn 100 percent admission into college where they will maintain a 90 percent retention rate. Every LEAP graduating class since the first in 2005 has achieved that remarkable 100 percent record. These numbers tell me that LEAP has given its students the skills and social capital to succeed in society, truly transforming their lives and future.

But serious thoughts of the future are not on anyone’s mind in the Rutgers amphitheater that night in 2006. It is actually the second LEAP graduation. The first held the year before in the LEAP high school gym was validation of LEAP’s mission and program. The second graduation in 2006 is both validation and acceptance of LEAP’s students and their families onto the Rutgers campus and into the world of the university.

Each LEAP graduation, wherever its been held, is all about the students and the very human stories they represent – overcoming unimaginable poverty and crushing violence in their neighborhoods, conquering language and comprehension barriers to earn, in most cases, what no one else in their families ever had, a diploma and the opportunity to continue their education.

On graduation night in 2006, the Rutgers auditorium is overflowing with balloons, banners, stuffed animals and flowers, to the point that Rutgers security interrupts the ceremony and for “safety reasons” requires that all the decorations be moved to a covered entry way to the auditorium. This delays the ceremony by 30 minutes, but it doesn’t dampen anyone’s enthusiasm. Everyone in the room knows these graduating students have beaten the odds, and they’ve come to celebrate accordingly, with passion and noise and shouts of “Ole!” and “Felicidades!” and “We love you!” and “You go gal!”

The cheers grow louder as each graduate appears in maroon robes and mortar at the rear of the auditorium. Each strolls down the aisles with a distinctive swagger of self-confidence toward the elevated stage. For many, this graduation is the first time in their lives they are being honored, both individually and as part of a cohesive community.

Indeed, this is an evening of many firsts. For most in the room, it is the first time anyone in their family has graduated from high school. It is also the first time most of the families and relatives have been on the Rutgers campus, for the simple reason that they have never been welcome.

For decades, the Rutgers campus stood in stark relief against the decay, violence and abject poverty of Camden, as the university ignored any responsibility or connection to the community in which it is located. One might think that Rutgers’ beautiful buildings and rigorous academics would serve as an inspiration for the community. Instead, they stood for vast social inequalities.

Like a castle with a moat, signs in Spanish when I first came to Rutgers Camden read “PROHIBIDO EL PASO,” which the university administration thought meant “Keep off the Grass,” instead of “Keep Out,” a reminder to the people of Camden that they did not belong. I was stunned and angered by the signs, which to me represented a lot of what was broken with our education and immigration systems. Getting rid of them became my first order of business at Rutgers.

Seeing so many community people there for the LEAP graduation is vindication, I feel, not just for me or for Camden, but for all those who have been marginalized in our society. That night, it feels as though the “Keep Out” signs have vanished from Rutgers for good.

Two students graduating that night – Sylvia Vasquez, the class Valedictorian, who came to LEAP as a shy, reclusive young girl from Guatemala, and Julio Atenco, the class Salutatorian, who came to LEAP as a seven-year-old from Mexico – are in many ways typical of their classmates who have also cleared the “Keep Out” barrier and seen their lives dramatically change at LEAP.

Sylvia and Julio overcame poverty, a language barrier and an uncertain immigration status, as well as learning challenges and social handicaps, to graduate with honors from LEAP and go on to excel in college. Sylvia earned advanced degrees in engineering from Villanova, and could have landed a professorship at any prestigious university. Instead, she returned to LEAP to teach math to third and fourth-graders because that’s the age she believes students are most receptive to math concepts. Julio, whose dream of becoming a doctor was nearly shattered when Brown University withdrew financial aid when it discovered he was an undocumented immigrant, returned to Camden to complete his undergraduate work at Rutgers. He is now applying for medical school in the hopes to reach his dream.

When they enrolled at LEAP, many, if not all, of the graduating students in 2005 were fourth graders reading at a low grade level, to say nothing of their poor writing and critical thinking skills. In short, they had fallen through the cracks of both the public education system in Camden and society.

What these remarkable children, and every child that came to LEAP after them, did have was a passionate desire to learn, which I believe is the most important ingredient for success in education and life.

No, I thought as I moved through the auditorium on those graduation nights, the children...

In The Miracle on Cooper Street, Bonilla-Santiago shares the challenges and obstacles, potential resources, and support of fellow professionals that moved LEAP Academy from a small charter school in 1997 to its top position today. She describes and analyzes the establishment and accomplishments of LEAP Academy in one of America’s poorest and most violent cities, Camden, New Jersey.

Bonilla-Santiago also shares the story of her personal and professional struggles as a Latina from an impoverished and working-class background, surviving and fighting for respect in an academic world that many times did not value racial or ethnic diversity. Those experiences forged a dream of transforming a poor urban community through education.

The Miracle on Cooper Street narrates an inspiring account that shows how one determined individual can make a profound difference in the lives of at-risk children and their communities. It presents a working model for charter schools, while at the same time admitting that LEAP is a work in progress. Most of all, it describes an inspiring institution that has seen many young people break the cycle of poverty, graduate from high school, succeed in college, and go on to live productive lives.

Gloria Bonilla-Santiago, PhD, is a Board of Governors Distinguished Service Professor at Rutgers University and the director of the Community Leadership Center. She is the founder of LEAP Academy University Charter School in Camden, New Jersey.