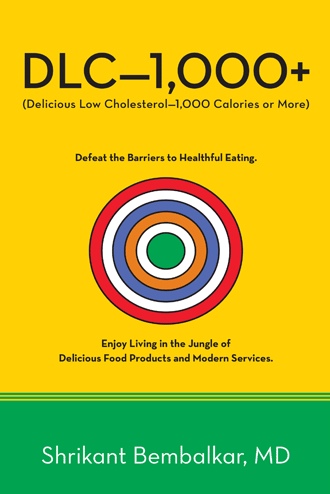 "Good morning. How are you today, Mrs. Johnson?" asked the nurse.
"Just fine, thank you" replied Mrs. Johnson. But, just as she said it as a reflex, underneath, she was not so sure. She knew that she had not been able to show any improvement in her weight. She had tried her best and yet the scales were going against her.
"How is it possible?” she murmured to herself. She knew she was hungry all the time. She knew she had said “NO” to her most favorite pecan pie on Christmas Eve. She knew she could eat more. Her stomach growled almost every time she left the table. And yet, the scales could not be wrong.
She wanted to ask the nurse - "Is it possible to eat smaller quantities of food and still not be able to lose weight?"

"Congratulations George, you have done it and, in spite of the holiday season" someone was heard saying.
As Dr. George came out of the doctor's office with a bright smile on his face, everyone in the entire waiting room had eyes fixed on him.
All had the same questions for George.
"How did you do it, George?"
"What is your secret?"

Ann had tears in her eyes. She knew she was overweight. She had tried her best. She had read magazines, attended programs, taken special diets, but nothing had worked for her for long. She was sad, frustrated, and angry and wanted to know why.

Benjamin was scared stiff about his cholesterol and his weight after he learned recently about his friend's heart attack at age 42. He wanted to do something but did not know how.

Catherine was anxious. She was a traveling salesperson. She had no time to be picky about her diet. She had to eat on the run. She was ambitious. She enjoyed power lunches. She sure wanted to know what to eat and where would be best.

Debra was a mother of three. She had read many recipe books but soon realized that one or two recipes don't make the entire day's eating. She tries to read all the labels but how much time can she spend reading labels? Also, she wanted to know when she should start being concerned about the diet of her family. They are all so young and healthy and she wanted them to stay that way.
Edward was wondering about the articles in the newspaper, programs on TV and radio about incidence of heart disease, colon cancer, diabetes, and diet factors. He wondered if it was all true or only the media hype. His family was raised on the farm and he just was not sure if he needed to change anything.

Farrah had just moved away from her home in West Virginia to her own apartment in Chicago and had never really cooked a whole meal.

All of us have met A, B, C, D, E, F, and others like them. They all want to do the right thing. They want to eat right and stay healthy.

Some of us have limited time.

Some of us have limited skills.

Some of us have limited information.

Some of us have our own “special” barriers.

This book is a collection of experiences and stories.

This book is my effort to simplify the Greek and Latin of complex medical advice into a diet plan that is simple, tasty and useful. Useful for everyday living and the every day battle against the delicious enemies of good nutrition.

You can begin to use it immediately to modify your daily diet plan. We will show you the army of barriers we face and how to deal with this enemy effectively.

This program puts YOU in charge of your diet and nutrition-- to do the right thing -- the easy way.


So, what are your barriers and are you ready to fight the enemy?

Are you frustrated with the results of your weight loss program, in spite of your good intentions and efforts?
Are you unable to use successfully and for a sustained period, the diet and nutrition information you receive from your healthcare providers?
Do you find it difficult to stick to the diet plan designed for you by someone else?
Would you like to defeat the barriers to healthful eating and enjoy healthy meals of your own choice for the rest of your life?

In a world where many face daily barriers to healthful eating, everyone wants to know George’s secret to weight loss success. In DLC—1,000+, George and his friends show others how they defeated the barriers and developed their own NEET style (Nutrition, ease, environment and taste - DLC-1000+), suitable for a variety of tastes, cooking skills and budget.

At a dinner party at his house, George tells his curious guests the story of his struggles, setbacks, and successes in modifying old habits and learning new methods that turned his focus away from unhealthy behaviors and choices and toward nutrition. As he details how he and others transformed their attitudes about food without compromising taste and convenience, George teaches all his guests how to create their own healthy eating plan, improve nutrition, overcome obstacles, reduce cost, and take charge of a satisfying diet plan with confidence.

DLC – 1,000 + relies on step-by-step process to achieving healthy eating habits by learning to keep them NEET, and most importantly, simple.

Dr. Shrikant Bembalkar is a board-certified internist. He was born in Mumbai, India, and graduated from Seth G. S. Medical College. After completing his post-graduate training in America, he joined a group practice in Beckley, West Virginia, where he has enjoyed living and working for more than forty years.