The Mirror of Socrates

Twelve Essays of a Reader on World Literature 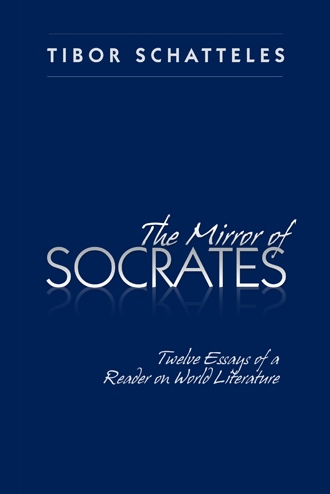 Of Mimesis: the Eternal Debate

- Notes of a Hesitant Peripatetic -

The Ancients and the Rest of Us

The reader, certainly the attentive and discerning reader of Aristotle's Poetics and Plato's Republic, specifically the latter's books III and X, could remain with an obsession throughout his reading life: the urge to measure all his readings against the two, partly conflicting and partly complementary, theories of poetry. The compelling, if not always convincing peroration of Socrates against (many) poets as imitators, and poetry in general, calls for being either approved or rejected - (always in an elaborate argument) - never neglected, never again ignored. And if your conscience is bad, for having yielded to the "honeyed Muse" - and how difficult it is to resist her! "Do not you yourself feel her magic, and especially when Homer is her interpreter?" (Republic X,607,c) - then you resort to Aristotle for consolation. Most obviously to the Poetics, because immediately offering itself as a gentle antidote to the austere preaching of Socrates. Though the Stagirite's writings on logic could supply the instruments for the delightfully nasty exercise of collecting and exposing the plethora of fallacies in which Socrates/Plato indulge, they are not relieving the burden of guilt for having yielded to Feeling.

When reading just casually the Poetics, one cannot escape the impression that it was meant to counter the "book X" of the Republic, and to clear up as well the numerous contradictions in which Plato gets entangled when discussing poetry in so many parts of his work. But this, in itself, wouldn't satisfy since the difference between the two great philosophers seems to consist only in a basic value judgment: Aristotle took the negative statements of Socrates about the function of art or poetry and, so to say, multiplied them by a factor of (-1). (All considered, this was quite a performance if you think that he had no clue of negative numbers.) Consequently it is as if you would have to make a choice between the delights offered by the "honeyed muse" and the austerity of the philosophers supposed to rule over the postulated Platonic commonwealth. No relief, such as an objective criterion of choice, seems to be offered by Aristotle. His major complements to whatever is to be found in book X of the Republic refer essentially to the construction and functioning of the poetic work, and the assessment of its characteristics as extant in Greek theater and epic up to his time. Essential to his contribution is the emphasis he places on those components which, if properly developed, will best serve the ultimate purpose of the poet when reaching and moving his public.

But what is the poet's purpose?

"Listen and reflect. I think you know that the very best of us, when we hear Homer or some other of the makers of tragedy imitating one of the heroes who is in grief, and is delivering a long tirade in his lamentations or chanting or beating his breast, feel pleasure, and abandon ourselves and accompany the representation with sympathy and eagerness, and we praise as an excellent poet the one who most strongly affects us in this way." [Republic X, 605, d).

This is a negative echo of a widely held view of poetry, which a forerunner of poetic theory, also an opponent of Socrates, has gracefully formulated in the words I need to quote:

"Into those who hear it comes a fearful fright and tearful pity and mournful longing, and at the successes and failures of others' affairs and persons, the mind suffers, through speeches, a suffering of its own." [Gorgias of Leontini: Encomium of Helen, 9]

This is what is common to "the very best of us" and the not so good ones as well. The difference is purported to consists in the fact that the former live their own life under the stern control of Reason, and abandon themselves to the Irrational only in theater or when reading poetry and, of course, before having been warned by Socrates:

"If you would reflect that the part of the soul that in our own misfortunes, was forcibly restrained [by reason] and that has hungered for tears and a good cry and satisfaction...then relaxes its guard over the plaintive part, inasmuch as this is contemplating the woes of others, and it is no shame to it to praise and pity another who, claiming to be a good man, abandons himself to excess in his grief, but it thinks this vicarious pleasure is so much clear gain, and would not consent to forfeit it by disdaining the poem altogether." [Republic X, 606, b]

Thus, it is the imitation of the meaner characters and tempers by which the poet so often appeals to the meaner, i.e. emotional and dark part of our nature.

What can Aristotle say against this? Whatever his answer, it is not deduced, in every respect, from a different definition of poetry. He only changes the value qualification of Socrates' assessment though never naming his opponent. Neither will he argue against the hero "who is in grief, and is delivering a long tirade in his lamentations" thereby causing us, even "the very best among us", "to praise and pity another, who claiming to be a good man, abandons himself to excess." In fact, if this pathetic hero sprang from the mind of Homer or Sophocles, he is likely to be recognized as "a higher type of character" - as we are assured in the third chapter of the Poetics. And the poet's purpose is in fact to communicate the kind of emotions for the spread of which Socrates/Plato will ban him from their Republic.

"And since the pleasure which the poet should afford is that which comes from pity and fear through mimesis, it is evident that this quality must be impressed upon the incidents" [Poetics, XIV, 3].

Offering a testimony to his love of reading and the goal of sharing it with others, author Tibor Schatteles presents a collection of twelve essays that study a wide range of works of literature, including works of Philostratos of Lemnos, Sophocles, Cervantes (Don Quixote), Gogol, Chekhov, Balzac (Gobseck), Hermann Broch, Robert Musil, James Joyce, Franz Kafka, Marcel Proust and Aristotle’s Poetics.

In these essays, he presents the simple exercises of a reader reaching out to communicate with other readers, building on notes he made during first readings and gathered following his retirement from the Canadian Federal Civil Service. Taking a cue from Montaigne’s essay on reading books, he asks nothing of his books but “the pleasure of an honest entertainment”—and yet he also seeks to share his ideas with others and engage in discussion and analysis.

In The Mirror of Socrates, Schatteles examines the seminal works of literature in scholarly details, sharing his thoughts, ideas, and interpretations of each author’s writing and purpose.