The Almost True Story of a South American Street Dog 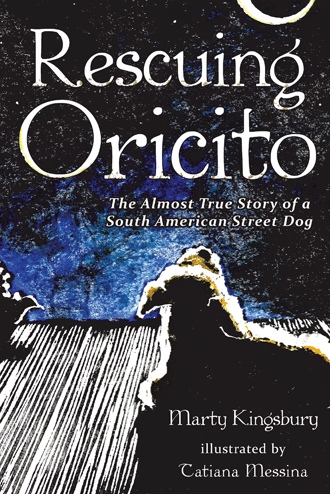 “Mamá?” Oricito wriggles close to his littermates, trying to get warm. “Mamá,” he whimpers, “where are you?”

The sun has come and gone and come again since Mamá left, and now a cold wind shivers through the row of álamos trees separating one house from another. Oricito looks across the field for any sign that his mamá might be coming home, but all he sees is tall grass, a few flowers by the house, and two horses grazing near the fence.

Oricito and the other puppies have already cleaned the bugs from each other’s ears and armpits. They have licked the dew off the grass and chewed the sticks in their nest, but still they are hungry for food. Oricito stretches, trying to comfort his rumbling belly, but the sticks and dead leaves dig into his back. Even the old T-shirt, once a soft comfort, is worn thin against the brittle sticks.

As the first rays of sun creep over the rooftops, the oldest pup touches Oricito’s nose. “I’m going to look for some food,” he coos. “Buena suerte.”

Oricito tugs at his littermate’s fur. “I don’t need good luck. I need food. Bring some back, and we’ll have lunch and maybe some good rough-and-tumble play. It’ll be fun.” But the older puppy pulls away, disappearing into the tall grass. Then another follows him and another, until Oricito is left watching the tip of the last tail dash past the grazing horses and into the land of the unknown.

Oricito has never been alone. In all of his eight weeks on earth, his mamá and his littermates have made the world a smaller, friendlier, and more playful place. They’ve made the sky softer, brought the stars closer, and taught him to listen to the music in the trees. He has been safe because their smells and warmth surrounded him.

As the sun lifts into the sky, climbing over the tallest trees, Oricito realizes that he, too, must either find his way or stay and die of starvation.

Oricito points his nose into the air, catching the earthy smell of the horses in one direction and coffee, crisp and burnt, in another. He tries to follow the smell of coffee, but the scent gets lost among the exhaust of the cars and motorcycles whizzing by. He aims his nose again and finds the faintest edge of a delicious smell, thick and salty. “Fish,” Mamá had called it. It is soft and cold and gooey and tasty. It slides over the tongue and down the throat. It makes whiskers tingle, bellies tickle, and tails ride high. When she put her paw on his nose and made him wait before eating, did she say something about danger at the fish market at the riverside dock? He wants to remember, but right now the smell of fish fills his stomach with hope. He doesn’t know where he is going, but he goes.

It isn’t long before the houses squeeze together. The fields turn to gardens with spring flowers. The streets become narrow lanes with parked cars squeezed along the side. Behind every house, laundry hangs on a line. Dogs bark, and Oricito trembles. He doesn’t know where he is going or what he will do when he gets there. All he knows is that he is desperately hungry, that he smells fish nearby, and that somewhere there has to be food.

The church bell echoes off the stone buildings of the town square, and Oricito follows the sound. The streets grow wide again; they fill with buses, cars, and horses pulling wagons. The streets are made of a pink stone that glistens in the early-morning sun. People stroll along the sidewalks. They stop and talk to each other, hugging, kissing cheeks, and laughing. The smell of a sandwich mingles with wet wool, fresh eggs, and farm cheese, and so Oricito follows. A woman—yes, the smells are in her bag—opens the door of the mercado, and the air fills with the yeasty aroma of fresh bread. He runs to the smells, but the door shuts on his nose.

“Hoo-whoo,” he howls, but the door does not open again.

And that is when he sees the river dock, an open plaza alive with people and smells. The scent of fish is thick in the air. “This is an exciting place,” Oricito thinks, and he runs across the street. A car squeals and swerves out of the way, but Oricito pays it no mind. He thinks, “Fish! Food!”

The dock is old, and the planks are soft and warm beneath Oricito’s feet. Plastic tarps hang on flimsy poles, making yellow, red, and blue tents that snap in the breeze and hang over tables made of old doors resting on rickety wooden crates. And the food: Look at it all—fruits, fish, meats, and breads piled as high as the eye can see!

“Maybe after I eat some fish, I could take a nap,” Oricito thinks. “Under that table looks like a nice, dry spot.” He sits tall, lifting his paw for the woman selling bread.

“Hola, perrito,” she says to the puppy. “Quieres pan?” She tears off a chunk of bread and tosses it to him.

“Si, gracias! Mm, delicioso!” He licks his lips, and she tosses him another piece. “I don’t know if you are interested …” Oricito lifts his paw and stretches his lips into a smile. “But I could be your dog. I’d get up early in the morning and keep you company. I’d do anything you asked. What do you say?”

But the woman has her eye on a man ambling by her table.

Oricito paws the woman’s ankles, yipping for another piece of bread.

“Well, well, well. So, you want to be a pet. Isn’t that sweet?” A low, gravelly voice blows across the dock like a hot wind on Oricito’s neck. It’s an animal. At least Oricito thinks it is. The creature moves and breathes and flaps, but it’s enormous, easily the size of a small car. It is all black with long, stubbly whiskers; long, shiny teeth; and tiny, beady eyes. It sounds like a car engine. Oricito stares at its wet, flat, powerful flippers and at its neck skin that flops in folds halfway down its body. The puppy paces and studies the animal while a fisherman cuts and tosses a head from a fish. The beast lifts its head and catches the treat. It’s amazing. Oricito bows, a gesture that his mamá told him shows both respect and joy. And then he sees them—behind this beast, lining the edge of the dock, there are many more just like this one, honking and roaring and gulping at fish. Oricito stares, but he can’t figure out where one ends and another begins.

“Hey! Perrito!” The beast’s deep voice shakes Oricito from his reverie. “I’m talking to you.”

Oricito bows his head, wags his tail, and steps toward the beast. He has never played with anything this big, and he circles around it, hopping and yapping and nipping at the animal’s thick, salty skin. He wants to put his nose in the folds to feel if there is fur or feathers. If he could just get close enough—

“Look, Daddy, sea lions!” A little girl whirls past Oricito, leading a tall man in blue jeans and a T-shirt. The man runs along beside the girl, clutching a camera in one hand, his daughter’s hand in the other. A woman trots along behind them. She reads a book with the word “CHILE” embossed in big, yellow letters. She flips through several pages and, as they approach the dock, she announces, “Yes, sea lions! They’re called lobos de mar! It says here, ‘These animals swim up the River Valdivia from the Pacific Ocean.’ Oh my goodness gracious. It says, ‘A few years ago, the fishermen built special ladders so the lobos de mar could climb onto the docks at high tide.’ Isn’t that nice? The book also says, ‘They have a ferocious roar.’”

“Lobos de mar?” Oricito thinks and tips his head from side to side. He yips, wags his tail, and sticks his tongue out. “Do you want to play?” he asks the beast. His blonde, feathery tail catches the sunlight. Oricito hops, gently thwacking the sea lion in the nose. “Won’t you play with me?” 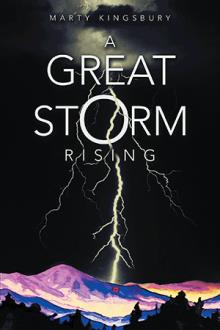 Oricito has never been alone. In all of his eight weeks on earth, his mamá and his littermates have made the world a smaller, friendlier, and more playful place. But now they are all gone. As the sun rises on a new day, Oricito realizes that he too must either find his way or stay and die of starvation.

Led by his nose and his growling tummy, Oricito travels to a riverside dock in Valdivia, Chile, where he soon encounters an enormous creature with long whiskers, shiny teeth, powerful flippers, and beady eyes. Oricito wants to play, but the sea lion does not. After one good hiss, Oricito is chased into the street where a spooked horse kicks him and leaves him for dead. But all is not lost when two wily street dogs with much more worldly experience rescue Oricito and invite him along on their great adventures.

In this tale for middle readers, a puppy journeys from his family to become a street dog who, with his two new friends, must battle rain, hunger, cats, big dogs, and the most evil of all evil forces: a local politician whose greatest ambition is to rid Valdivia of street dogs.

Marty Kingsbury’s poetry and fiction have appeared in magazines and anthologies in the United States and Canada: Telling our Stories: Roll, The Animal Anthology Project, and Fresh! Literary Magazine. Her plays have been produced in the United States, England, and Australia. She lives in Cambridge, MA with her lover and their two rescue dogs.

Illustrator Tatiana Messina is a painter and designer. She lives with her husband and two children in Temuco, Chile, where, for the last ten years, she has created scenery, costumes, and puppets for opera at the Teatro Municipal.