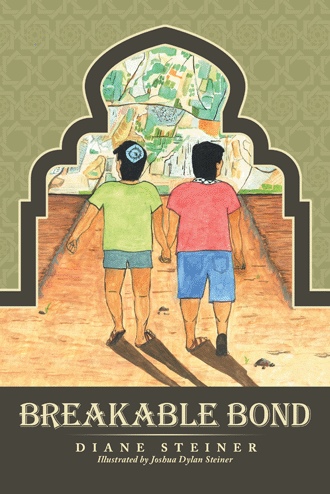 Ahmed wiped his brow, he couldn’t seem to stay cool with the heavy moisture in the air. This was an unusual weather day in Tulkarm for even though it was hot this time of year, the environment seemed to be exploding with dampness. Ahmed was looking forward to a game of soccer with his friends. They were practicing for a competition to be held in the next two weeks. “Are you sure, Abi, you will not need me to help bring the fruit to market?”

Ahmed asked. “You have been a great help to me and your grandfather. I declare Ahmed has earned a day of play. Go have fun, but practice to win!” Ahmed’s Abi was a very serious man who always put his work first, but what was more important to him was the well-being of his family. He knew how much soccer meant to Ahmed, and secretly, he was hoping Ahmed would become the champion soccer player he never was. Ahmed had many dreams of playing in the great Al-Khader Stadium and he kept this dream close to his heart. He felt sure if he practiced hard enough his dream would come true one day.

Ahmed met his friend Mahmoud and some other boys to get ready for the game. When Mahmoud saw Ahmed coming towards him, he yelled out to him, “Have you heard what happened Ahmed?” “About what, Mahmoud, catch your breath and tell me the news.” “Some Israeli soldiers came to my house and told my father that he had four weeks to gather our belongings and leave. My Abi didn’t know I was listening and he hasn’t told me anything about it. I’m really angry Ahmed. My Abi’s family built this house. I have known nothing else. What will my family do?” Ahmed hesitated and put his arm around his friend. “Mahmoud, your Abi is smart. He will figure something out. Maybe you will go live with other family members in another city. Don’t worry, if you’d like, I will ask my Abi if you and your family can stay with us for a while.” “No, no, Ahmed, don’t say anything. My Abi would feel so ashamed.

He is a very proud man. Your offer is very generous and you are truly a good friend, but promise me you will not say anything to him or anyone else. Promise?” “Of course I understand. If you need anything, I will do what I can to help you.” “Ahmed, I am so angry because the Israeli government expects our people to leave the only homes they have ever known. The little we have they want to take away from us. Be careful Ahmed. It’s only a matter of time before your family gets that knock on the door.” Ahmed could see the frustration on Mahmoud’s face, but he wanted him to know that it was not all the Israeli people who felt that way but this was not the time to explain this to him. “Yes Mahmoud I will but everything will work out, you’ll see.” “I hope you’re right Ahmed.”

Ahmed sensed there were more important things to do now than playing soccer. “Can I help you Mahmoud?” Ahmed asked almost in a whisper. “I think it would be best if I stay here and wait for my Abi to come home. I think my Ommy, brothers and sisters may need me. I hope you understand.” “Yes I do understand, too clearly. Have you told the others yet? “Yes, Daoud came earlier and I told him to tell the others that my family needed my help. That is all I told him.” “Goodbye Ahmed,” Mahmoud said sadly. Ahmed sensed it would be the last time he would see him for a long time but he was concern was growing and realized his family could be next. The family home was close to where the wall would be built, but was it too close, close enough for the Israeli army to demolish it? At this time, there was no answer to his question. All he could do was wait.

As Ahmed walked home, he thought about the continuing conflict between the Palestinians and the Israelis, although he had a strong belief that there could be a shared humanity between them and an

appreciation and respect for each other. “If only the common people could talk to one another and make the decisions, then maybe we would have a peaceful co-existence,” Ahmed thought hopefully. From his conversations with his Abi, he knew that if the conflict was left to governments and political groups, there would never be peace. Somehow, in his soul he believed it could happen.

He continued walking when he looked up to see clouds covering what had been a sunny, blue

sky. He suddenly felt anxious thinking about what happened to Mahmoud. What if the same thing happens to my family he wondered? Where would we go? I must speak to Abi when I get home. His steps began to take on a quicker pace until he felt himself running towards home.

As he approached his house, he felt a calmness watching his Ommy and sister in the courtyard gathering the wash. “Ahmed, you’re home early. Didn’t you have soccer practice with Mahmoud?” “Yes Ommy, but Mahmoud had a family emergency and had to cancel.” His Ommy had a concerned look on her face and went back to her wash. “Where is Abi? Is he still at the marketplace?” Ahmed asked earnestly. “You know he won’t be back until late afternoon. It seems you need something to do. Here hang the rest of the wash out to dry. When you finish that, I’ll have more to take your mind off of whatever it is that is bothering you.” “But Ommy,” “Never mind, just get this chore done. It will be a help to me.” Ahmed’s Ommy scolded.

With each piece of wash Ahmed hung up, he became more restless and wished his

Abi would return home early. He thought about going to the marketplace after he finished his chores and then decided he didn’t want his family to be suspicious about his intentions. I’ll be patient and speak to Abi after dinner. That was always the time when Ahmed and his Abi would have serious discussions about the world. He and his Abi seemed so close during those times and it made Ahmed feel like a man. He worked on his chores and waited for dinner. Ahmed thought he heard the quiet footsteps of someone enter the house. He came running to see who it was and found his Abi slumped in the chair with his eyes half opened. “Abi,” Ahmed said apologetically, “Are you all right? Can I get you some coffee?” Ahmed’s Abi did not answer. As Ahmed was about to speak again, his Ommy came in bringing some nourishment of dried fruit and a cup of strong coffee. Her hand to her mouth, she acknowledged Ahmed to go to his room. Ahmed looked puzzled and worried because his Abi usually came home energetic from a day of meeting customers and selling his goods in the marketplace. He went to his room and moved close to the door so he would not miss any conversation between his parents. For what seemed like forever, there was silence and then he heard his Abi speaking in a rapid fire voice. Ahmed could sense the frustration in his Abi’s conversation with Ommy. He could hear parts of the conversation and knew it was about the security wall being built.

There had been several violent attacks on innocent people, both Palestinian and Israeli people, and the Israeli government was beginning to erect barriers around the village of Tulkarm. Ahmed’s Abi’s voice grew louder and his Ommy tried to calm him down. “You don’t know what they will do. I fear, no I know they will come in and bulldoze our home. Mahmoud’s family has been told to leave, and I have spoken to others today who have been given the same warning. I am sure we will be next for our home is close to where the wall will be built.” Ahmed’s Ommy was upset but told her husband that they could stay with family. Ahmed’s Abi did not want to hear this. All he knew was that the house his Abi and Jiddo had built would be destroyed and the life they once knew would be gone. At that moment he heard the door open again and saw his Jiddo mumbling to himself. He saw his Abi walk towards his Jiddo and attempted to put his arm around him. Ahmed’s Jiddo pushed his son away and was frantically speaking in Arabic.

A compelling tale of the endearing bond of friendship and compassion amid war, Breakable Bond uncovers a personalized element of what life in Palestine is like as the Palestinians and Israelis fight over land.

When Ahmed arrives home to find his house in Tulkarm destroyed, he feels betrayed. Frantic, his efforts to locate his missing family are frustrated by pervasive fear and suspicion. No one is talking, so Ahmed decides he must take a risky journey to Netanya to search for his father’s Israeli childhood friend. Can he get past the checkpoint safely into Netanya, or will his family’s disappearance remain a mystery in his village? Ahmed hopes that Joshua may provide the help he needs to be reunited with his family. Joshua is a kindred spirit who yearns to help his new friend, but their friendship is strained by being on opposing sides of the conflict.

Along the way, Ahmed finds much more than he ever hoped to find and now history may once again repeat itself. Will this new bond that he has formed with Joshua remain unbreakable, or will fate intervene again?

Written authentically and with an unprejudiced passion for those who live under constant threat in the Middle East, Breakable Bond offers a very human face to an impossibly complex situation.

Author Diane Elizabeth Steiner has been an educator and an adjunct professor at Chestnut Hill College in Philadelphia. Now she teaches reading in Florida. She is Ima to Adam and Joshua, her children, and Safta to her four grandchildren. Breakable Bond is her first novel. She lives in Florida with her husband, Harvey.

Illustrator Joshua Dylan Steiner was born and raised in Philadelphia, Pennsylvania. He is an adjunct professor at City College in Gainesville, Florida. Joshua’s artwork was published in The Geometry of Meditation, and he continues to sketch and paint today. Breakable Bond is his first book illustration.