Giving Our Best Dreams Their Best Chance to Happen 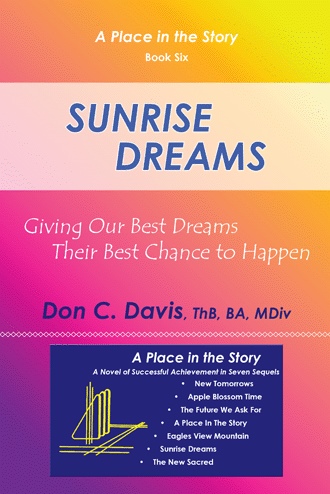 Don C. Davis is a storyteller, who through seven fiction books, defines new beginnings beyond old endings for the digital-information-molecular age; stories of,

- a partnership of science, technology, and a knowledge-based faith,

- a vision of the new sacred,

- linked under the overall title of A PLACE IN THE STORY.

“All any of us ever get is a place in the story.”

The final days for Dr. James Kelly were filled with a hope that his family, especially all his grandchildren, would be at his memorial service at the church near the farmhouse where he had grown up.

After the minister at New Home Church had led the service up to the time for memorial tributes to be given by the family, Steve walked slowly from his pew to the chancel and stood behind the old pulpit his granddad had stood behind as a boy and dreamed of the future.  That old dark pulpit had been saved when the white wood frame church of his boyhood days had been torn away and replaced with a new brick structure.  To have the usual pulpit set aside temporarily and the old pulpit placed in the chancel during his memorial service was a part of Dr. Kelly’s request.

Steve looked down at his family, took a deep breath, and began tenderly.  “Our gathering here today is in respectful tribute to the life of Dr. James Kelly.  Soon after our much loved granddad died, Grandmother said to me, ‘Steve, you and your granddad were very close.  I know how much you admired him and how very much he admired and trusted you.  You’ve got to speak for all of us at his memorial service.’ I am honored to fulfill that request.  In great respect for the partnership Grandmother and Granddad shared for fifty-six years, I speak for all the family in a tribute of honor and great admiration.

All any of us ever get is a place in the story.  That was one of Granddad’s often repeated phrases.  Granddad’s place in the story has been one of great honor, high respect, and distinguished nobility.  Dr. James Kelly was held in high esteem by all who knew him, by his whole family, by all those who were privileged to listen to his sermons, by those who listened to his common sense philosophy in his classrooms, and by those who heard him speak at major conferences.  They all held him in high esteem.  To have known him personally, is to remember him as a kind and caring person, a practical, honorable philosopher, and distinguished gentleman.  What made him stand so tall among all of us was the magnitude of his mind, his intellectual integrity, and his warm and caring congeniality.

Front and center in Dr. Kelly’s own story, he wanted to be remembered as a person who envisioned a future based in the Big Ten Universal Qualities that can be lived out in the everyday lives of all the world’s people as world citizens, wherever their journey story takes place.”

Steve paused and looked down a moment, before he looked up again and said, tearfully, “I can’t stand here behind this old pulpit, where Granddad stood as a boy and dreamed his future, without shedding tears.  So give me a moment.”  After wiping away his tears, Steve said, “Not only has Grandmother asked me to speak, but Granddad had also asked me to speak at his memorial service.

Not long before Granddad’s closing days, he was one of the speakers at the World Future Conference.  He asked me to go with him to that conference where distinguished leaders from around the world gathered to think ahead about the progression of the human story.   I was honored to be asked to be there and to hear his presentation which summarized his faith and philosophy of life.

While we were at that conference, he talked about having more days behind him than before him.  I had never heard him speak in that manner before.  He talked about his memorial service and asked me to speak. ‘I have a special request,‘ he said.  ‘I want you to include some of what I will say at this conference.’ I had a copy of his manuscript, but as he spoke, I listened with more than usual attention.

What he said in his presentation to that distinguished world audience was a basic statement of his personal philosophy of life and future vision.  It was the magnitude of his thoughts that led him to venture into new frontiers of vision.  In deep respect, I want to share selected excerpts from that visionary presentation.

It bore the appropriate title,  “THE NEW SACRED.”  He began with three questions, First, he asked, “What if one of the most important uphill challenges of our time is to make sure the qualities of our humanity keep up with, even lead, our science and technology?”  Then, second, he asked, “What if we had ten universal qualities which are so rewarding they could be used as word tools to define a new sacred for our world family as the future we ask for?”  His third question was, “What if we learn as much as we can about how all molecular existence works, and learn how to work with the way it works so that we dare to dream bold new dreams for the human family far down into distant tomorrows and give those dreams their best chance to happen?”

He answered his own questions in the thesis he presented at the World Future Conference.  He said, ‘In the progression of our human story, as a sweeping collective identity, we are moving away from transcendence to immanence, from a vertical viewpoint to a horizontal paradigm.  We are crossing a great divide from authority-based religion, informed by persistent old world views in mythology, tradition, and literalized sacred texts, over to a knowledge-based faith, informed by science, technology, and the Big Ten Universal Qualities, as a guiding template we can overlay on our identity to guide us to the greatest future ever dreamed.

This knowledge-based faith is so basic and overarching that when it guides what we plan to give to life it becomes a sacred request of life.  It’s a faith that respects the oneness of all molecular existence and our place in that mysterious and amazing story.   What we are learning is that the story of our existence is an ongoing fantastic story in which everything is interrelated.  What we are learning about the oneness of all existence is that even plants are aware of other nearby plants, and act in interrelated concert.  Even how we think about this interconnectedness is itself a part of this overall oneness.  We are a part of all that is and it is a part of us.  However remote and infinitesimally small, there is a collective nature of our place in all things that becomes a kind of total environment.  Learning how to respect that is the new sacred.’

Granddad believed some universal qualities have come into focus in our time that can help us define and shape our tomorrows that are far better than our yesterdays.  He said, ‘We have not lived up to our potential.  We can do better!  I believe there are now ten universal qualities that can lead the way to a great new age of promise.’ 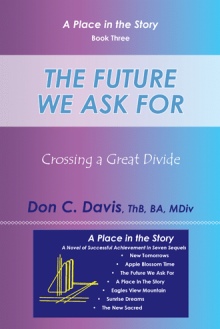 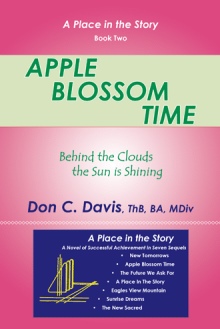 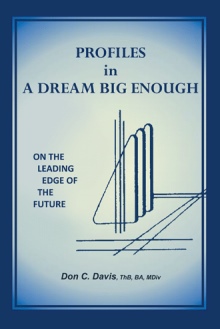 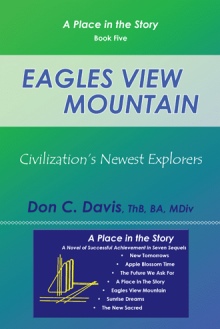 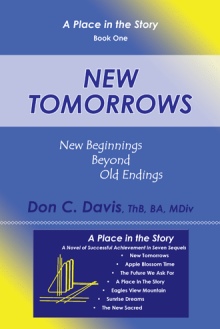 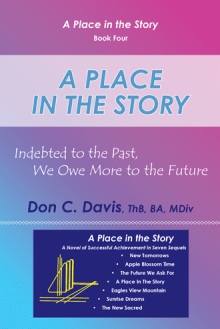 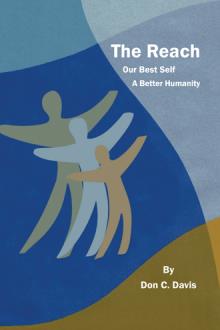 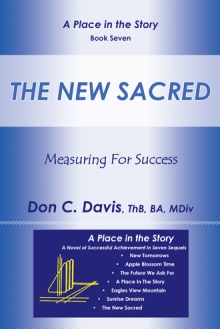 Don Davis writes on the growing edge of the future. His novel,

A Place In The Story, is about choosing to live on the growing edge.

The seven sequels are more than just the best of serious fiction; they tell the story of Dr. Kelly, beloved granddad, who is also a down-to-earth philosopher of life, future-vision speaker and writer, and a most unusual professor.

Through A Place In The Story, we can shadow Dr. Kelly’s faith journey story and dare to dream our best dreams, then give them their best chance to happen as fellow pioneers of new tomorrows and the new sacred.

We live in the greatest age in all human history! We are indebted to the past, but we owe more to the future.

The rewards have never been greater for the human family to choose the identity markers of the Big Ten Universal Qualities to define our best future.

When we choose the Big Ten Universal Qualities for our identity markers our brain creates a kind of inner voice, a talisman, an alter ego, that magnetizes the identity markers that lead us to our higher self.

Don C. Davis, ThB, BA, MDiv, has earned several degrees including a Master’s of Divinity. Davis has served as a minister in rural areas, small towns, and large cities. He and his wife Mary have two grown children and grandchildren. This novel is part of a seven-book series.