Spirituality and Your Life Story 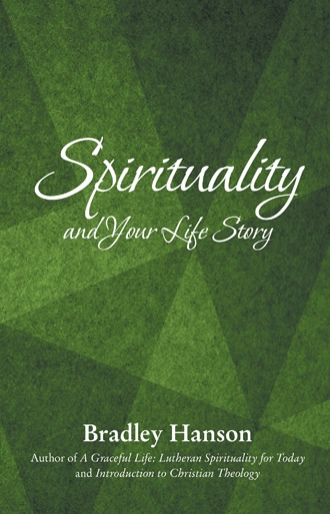 Introduction
While my personal and academic engagement with the field of spirituality began in 1978, a more recent experience and a discovery have been the impetus for writing this book.
The experience occurred in February, 1997 when I was visiting my long-time friend Shoonie in Arusha, Tanzania as part of my research for a book on Lutheran spirituality. Shoonie was the director of a school and program aimed especially at the education of Tanzanian girls. The two of us were in her rented sandy-colored stucco bungalow. An eight foot wooden wall surrounded the house, her Land Rover, an elevated water tank for bridging gaps in city service, and a shed with shower and toilet for the male guards. The wall and guard service were needed to deter thieves. We had finished the evening meal in the cozy dining nook, put the dishes in the sink, and now were relaxing at the table with our coffee.
I told her that having surgery in late 1994 for colon cancer and a following year of chemotherapy had been a challenge for me not only physically and mentally, but also spiritually. I understood the heart of spirituality to be one's ultimate commitment or faith and a set of practices done to express and nurture that faith. The center of my faith was in God's bountiful grace made known centrally in Jesus. My core, daily spiritual practice was the Jesus Prayer, a form of Christian contemplative prayer in which I mentally repeat the words, “Lord Jesus Christ, have mercy on me.” I had been using this prayer daily for almost fifteen years, and it fostered a sense of the immediate presence of God. My sense of God's presence was very strong just before the surgery and three days later when the doctor told me it was cancer.
This changed when the first weeks of chemotherapy hit me really hard. I felt as though God had drawn back. I didn't feel that God had abandoned me. It seemed, rather, that God was watching me from a distance. It was as though my very good friend and strongest supporter was pulling away in my time of greatest need. The comfort and sustaining power of God's presence was much diminished for me. When I realized this, I altered my practice. Instead of using the Jesus Prayer, I read the Psalms, slowly, meditatively, an ancient practice called lectio divina, divine or spiritual reading. Psalm 6:2, 4 in particular spoke to me.
Be gracious to me, O Lord,
for I am languishing;
O Lord, heal me, for my
bones are shaking with terror…
Turn, O Lord, save my life;
deliver me for the sake of
your steadfast love.

Shouting out the eighth verse especially renewed my sense of God's presence,
Depart from me, all you
workers of evil [the cancer cells],
for the Lord has heard the
sound of my weeping.

I had yet to deal with my more difficult spiritual challenge. I had to face the real prospect that I might die from this cancer. I told Shoonie that within a few months after the surgery I had felt free to let go of further time to teach, write, and play tennis—all things that I loved to do. What I found very hard to let go of was more time with my wife Marion and our three children, who were all in their twenties and not yet established in life. Whenever I thought of having to give up more time with these dearest ones, my tears told me that I was not ready. But sometime a few months prior to this trip to Tanzania, something inside me had released. If need be, I was now ready to let go of my wife and children. It was not that one day I decided to do this. Rather, I only became aware of this deep inward letting go sometime after it had happened.
Shoonie responded, “Death is one experience for the person who dies, but death is a very different experience for those who survive. My identity has been shattered twice in my life, and I've had to put it back together again both times.”
I knew that her second son, age 16, had been killed in a traffic accident, and three years later her husband died suddenly from a heart attack. Shoonie's words made me realize that spirituality is intimately linked not only with our life events, but also with our personal identity.
The personal discovery giving rise to this book was my chancing upon Dan McAdams' life story concept of personal identity. Of course, if I had been a psychologist interested in personality theory, I would have known that since the 1990s this Northwestern University psychology professor's theory of personal identity has received widespread attention along with the classic theories of Freud, Jung, and Erikson. McAdams advances a three level concept of personal identity in which the various elements of the self are integrated through composing and revising our own life story.
Especially helpful to me was the life story interview structure McAdams created for his research. For some years already when I had met a new person, I often said, “Tell me about yourself.” The answer I received, though, usually dealt only with surface facts. Yet each of us has a rich, emotionally charged narrative in our heart. McAdams has devised a series of questions that draw out much of this inner narrative. His questions about key life events proved most fruitful for me: a peak experience, a low experience, a turning point, and questions about an important event in childhood, adolescence, and adulthood. I used a modified version of this life story interview in most of the personal conversations quoted in this book.

Each of us has come to our current life stance through a journey of unique experiences—being born at this time, growing up in this particular social setting and culture, experiencing these specific successes and losses, and having these significant relationships. Whether we are in the early, middle, or latter part of our personal faith story, the ending is still ahead of us—and reviewing our own faith story helps us chart our course into the future.

Using psychologist Dan McAdams’s idea that we make sense of life by composing our own life story, author Bradley Hanson explores how our personal identity and spirituality are influenced by the meaning and values embedded in our childhood family life and major story lines promoted by our culture. In our most basic quest to make sense of life, he considers sharply contrasting answers to five fundamental questions.

With reflection and suggested group discussion questions at the end of each chapter, this study explores the idea that spirituality and one’s life story are intimately connected.

Praise for Spirituality and Your Life Story

“Real people tell their stories of success, love, friendship, forgiveness, and loss. Brad Hanson helps us ponder our own deepest commitments and the paths we follow to realize them. A fine book for individual reflection or group discussion.”
—H. George Anderson, former presiding bishop,
Evangelical Lutheran Church in America

Bradley Hanson is professor emeritus of religion and co-director of Grace Institute for Spiritual Formation at Luther College in Decorah, Iowa.