Nuclear Waste in Your Backyard

Who’s to Blame and How to Fix It 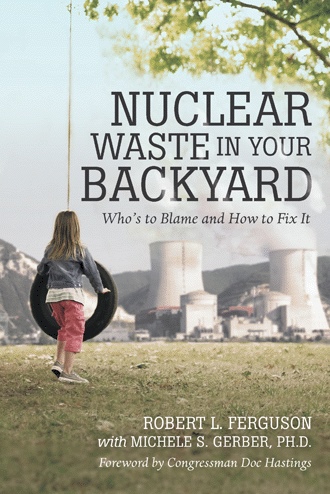 Nuclear Waste in Your Backyard

In the early morning of August 13, 2013, a phone call woke me out of a sound sleep. The voice on the telephone declared, “We won!”

“What?” Still half asleep, I recognized the voice as my attorney, Barry Hartman, from his office at K.L. Gates in Washington, D.C. He repeated the long-awaited good news that we had won the lawsuit that my two colleagues and I had filed as private citizens against the Nuclear Regulatory Commission (NRC) for unlawfully stopping the technical review of the Yucca Mountain license application, based on President Obama’s unlawful order that the Yucca Mountain nuclear waste repository be shut down. I was relieved that the Court finally had ruled in favor of the law, and reassured that the judicial branch of our government had defended ordinary citizens against the abuse of political power.

The U.S. Court of Appeals for the District of Columbia Circuit ruled that President Obama did not have the authority to terminate the Yucca Mountain Project and that the NRC had violated the law when its former chairman, Gregory Jaczko, stopped the technical review of the Yucca Mountain license application.

Unfortunately, much damage was done to the Yucca Mountain repository licensing process during the three years it has taken the Court to hold the President and his administration accountable to the law. The Yucca Mountain project offices have been dismantled, the highly skilled workforce has been dismissed and scattered, and the U.S. nuclear waste program is in a political stalemate. Fifteen billion dollars spent on developing the site and researching and preparing the license application have been wasted and the repository project has been set back by decades. (This delay could be reversed if the project were restarted without constraints from funding or politics). The Court’s August 2013 decision to issue an order to the NRC to resume the technical review of the license application offers a glimmer of hope toward breaking the political nuclear waste stalemate.

In a two-to-one ruling, the three-judge panel of the D.C. Court of Appeals issued a “writ of mandamus” to the NRC in response to the suit we filed in July 2011. The writ directs the NRC to follow the law and resume the licensing process.

Authority of the U.S. Constitution

The U.S. Department of Energy’s (DOE’s) action to withdraw its license application from the NRC was unlawful because it violated the Nuclear Waste Policy Act (NWPA), a law enacted by Congress and signed by two presidents—first in 1982 and again in 1987 in amended form. The NWPA expressly directs the DOE to submit a license to construct a nuclear waste repository at Yucca Mountain in Nevada, and requires the NRC to perform a technical review of the application within three years to make a recommendation to Congress as to whether or not the site is safe and suitable for licensing.

Under our Constitution, which has been governing the United States for 227 years, the founding fathers designed a democratic government with three branches to serve as a bulwark against corruption: an executive branch, a legislative branch, and a judicial branch.

The American people elect a President as the head of the executive branch. The President swears an oath to the country when he takes office to “take Care that the Laws be faithfully executed.” These words are a direct quote from Article II, Section 3, of the U.S. Constitution.

The people elect Representatives and Senators to serve in Congress as the legislative branch—to write and enact the laws by which we all live. Only Congress has the power to change or repeal laws.

Judges—who serve in the judicial branch of federal government—are not elected because they must be impartial, beholden only to the law and not swayed by elections and politics.

The separation of powers among the three branches safeguards our democratic government by ensuring that neither the legislative nor the executive branch has all the power. A further safeguard ensures that judges will arbitrate when either branch disregards the law or the Constitution.

When a duly elected Congress passes a law, the President is not free to disregard it, even if he disagrees with it. Our whole system of governance—our democracy—would fall apart if Presidents are allowed to ignore laws that are not convenient to their political agendas. Without the boundaries between the three branches of government, democracy could not exist. The D.C. Court of Appeals’ ruling in our case successfully demonstrated that the safeguards provided by the separation of the branches are working, even during the apparent dysfunction in politics. The Court ruled that the NRC, acting at the President’s direction, was not allowed to disregard the law.

Regardless of the ruling in our legal case, President Obama has become known for making decisions without the benefit of consulting the other two branches of government, as depicted in this clever political cartoon, which was published in syndicated newspapers across the country in early 2014.

Caption: By permission of Chip Bok and Creators Syndicate, Inc.

In his 2014 State of the Union address, the President bragged that he would continue to act with or without Congress: “Wherever and whenever I can take steps without legislation to expand opportunity for more American families, that’s what I’m going to do,” he stated. He added, “I'll act on my own to slash bureaucracy and streamline the permitting process for key projects,” and encouraged other elected officials to follow his lead, saying “every mayor, governor, state legislator in America, I say, you don't have to wait for Congress to act.”

When I decided to sue the President, it wasn’t on a whim or because I prejudged Yucca Mountain to be a safe place for a nuclear waste repository. I did it because I believed that an important Constitutional principle was at stake and Congress had not reacted as it should have to stop the President and his administration from violating the NWPA. The consequence of allowing a President or a federal agency to ignore the law and get away with it—even once—is to conclude that the rule of law does not exist in our country. Granted, there was much at stake for my state and 38 others forced to store nuclear waste indefinitely if the President was allowed to order the DOE and the NRC to terminate the Yucca Mountain Project and derail the entire nuclear waste program. If the technical review of the Yucca Mountain license application had been allowed to be completed as the law dictated, we would know once and for all whether the NRC considered it a safe and suitable site for nuclear waste disposal.

In the ruling of the D.C. Court of Appeals on August 13, 2013, Circuit Judge Brett Kavanaugh’s written statement thoroughly vindicated and supported our reasons for filing the lawsuit. He wrote:

“This case raises significant questions about the scope of the Executive’s authority to disregard federal statutes…Our [judicial]…task is to ensure…that agencies comply with the law as it has been set by Congress. Here, the Nuclear Regulatory Commission has continued to violate the law governing the Yucca Mountain licensing process…As things stand, therefore, the Commission is simply flouting the law. In light of the constitutional respect owed to Congress…we now grant the petition for writ of mandamus against the Nuclear Regulatory Commission.”

“Our analysis begins with settled, bedrock principles of constitutional law… the President may not decline to follow a statutory mandate or prohibition simply because of policy objections…

If you care about the environment and the rule of law, then it’s essential to consider how politics is driving the way we’re approaching nuclear energy. Robert L. Ferguson, a nuclear energy insider who’s spent more than fifty years working in the field, details how he partnered with others to wage a legal battle against two of the most powerful men in the world – President Barack Obama and Secretary of Energy Steven Chu – and won. The stakes were high: President Obama and his administration suddenly and illegally shut down the Yucca Mountain nuclear waste repository, which violated the law and was a smack in the face to residents of 38 states that expected spent nuclear fuel to be buried at a central location. Arm yourself with the knowledge you need to hold elected officials accountable and ensure that they’re not allowed to flagrantly violate the law. If you don’t take time to analyze the issues and do your part to improve U.S. energy policy, you may just end up with Nuclear Waste in Your Backyard indefinitely. Bob Ferguson has written an important book—his analysis is right on target. I highly recommend his book to be read and acted upon by every American concerned about how partisan politics can trump good science. Such action is especially important for those in positions of policy development. — Dr. Alan Waltar, past president of the American Nuclear Society and author of America the Powerless

Bob Ferguson has more than 50 years of experience in the field of nuclear energy, both in government and industry. He is a former Deputy Assistant Secretary for Nuclear Energy for the U.S. Department of Energy, and former Managing Director for the Washington Public Power Supply System. Ferguson has been married for 56 years to Catherine Crosby Ferguson. They have two daughters, Catherine Kolinski and Colleen Lowry; and three grandchildren, Ashley, Michael, and Keefe. Ferguson is the author of The Cost of Deceit and Delay: Obama and Reid’s Scheme to Kill Yucca Mountain Wastes $Billions. The book is about the cost to the country and the nuclear industry of the unlawful termination of the Yucca Mountain Project, and Ferguson’s legal efforts—suing the President to hold him and his administration accountable for violating the law for their self-serving political agendas. He and his wife split their time living in Richland, Washington, and Lake Oswego, Oregon.