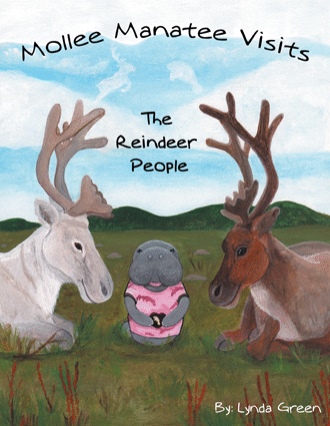 The Chief of all manatees, Maven Manatee was calling a meeting. This was serious! The manatees were coming from every direction. Friends and families came together; single manatees came with seagrass hanging from their mouths. Their feeding was interrupted, but they all knew that this was an important meeting.

Chief Maven was the wisest of all manatees, having lived 65 years. His great experience and knowledge of the changes in the ocean were vast. He was admired and respected. He was a large manatee with little round glasses that enabled him to see all the manatees that gathered to hear his wisdom and his message.

Nearby, Mollee Manatee was playing with Roly Poly, her dearest friend, when she noticed some succulent sea grass. Roly Poly saw it too, but Mollee got there first. It was easy to dart over her friend because Roly Poly could not swim as fast. He had been hit by a motorboat and he was recuperating from a recent boat strike on his back. Mollee was small and thin, whereas Roly Poly was a chubby little manatee and not very graceful when he swam.

Mollee was ready to devour the sweet hyacinths when she heard Chief Maven’s strong squeaks, loud and clear. She and Roly Poly joined the other manatees and waited silently for him to speak.

Chief Maven cleared his voice, “My friends, life these days are hard for us manatees. I am sure you have heard that we had another boat injury on our little Roly Poly. We are in a crisis because there are more boats on the waterways in Florida where we live. Some of our human neighbors want to speed their boats, never thinking that they might hit us and hurt us. Manatees are in danger all the time from these speeding machines.

“We have been on this planet for 40 million years; we are an old species, and now our habitat is being destroyed by pollution, plastic bags, and garbage. The other day, I saw a deflated balloon being consumed by Mr. Turtle who thought it was food. This causes damage to dolphins, whales, manatees and turtles, who ingest these airless balloons as they fall into the ocean. This can cause internal injuries.

“And least we forget, the disposal of fishing line, which wraps around our flippers, tightly I may add.” He lifted his flipper to show a scar caused by the fishing line.

“The future is bleak for all animals and humans unless we make some fundamental changes. We need to figure out how animals and humans can live in harmony. It would be helpful to know how other animals are adapting to this changing planet. What is their situation? How are humans treating other humans?

“I need an astute representative who can go out into the world and bring back information about other cultures and other species of animals. I need a representative who is adventurous and who will learn things that will help our community…….”

He was interrupted by Mollee waving her flippers wildly, and in her loud, high squeaky voice said, “me me –oh please pick me! I would love to go into the world to be the manatee ambassador. I promise to be on my best behavior,” she added softly.

Chief Maven looked at Mollee with a kind and intelligent stare. She was young, curious, and energetic. She was part of the next generation who will be the future caretakers of the planet. It will be up to the younger generation to protect the earth and the oceans or to destroy them. Mollee came from a loving family who lived a peaceful life in the lagoon. She was smart and precocious. Chief Maven knew, at that moment, that Mollee would be the best possible representative for the good will of the manatees. And that is how our story begins.

Mollee is a charming and precocious manatee who lives in an ideal world—until she is chosen to be an Ambassador for the good will of her species. With the help of a magic sea-bean, Mollee is transformed from a sea creature to a land animal, and her journey to find out about other species and cultures begins.

As Mollee embarks on her first assignment to Mongolia in search of the illusive Reindeer People, she travels through a magical land, learning about the people and their way of life. She meets a horse who takes her to visit the Reindeer People, and she soon discovers their secrets of survival in the face of extinction and climate change. She also learns how they manage to live in peace with another species. What Mollee learns from these compassionate people and their reindeer may change her life forever!

In this exciting tale of adventure, a manatee sent on a quest halfway around the world in search of the illusive and mysterious Reindeer People learns valuable lessons about peace, happiness, and compassion for all the world’s creatures.

Lynda Green has had a lifelong passion for working with marine mammals, especially with manatees. She is presently working in Belize caring for injured and orphaned manatees. Mollee Manatee Visits the Reindeer People is the first in an intended series that emphasizes the valuable connection between people and animals.