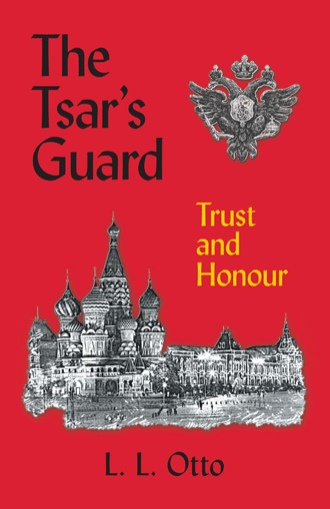 Carefully and with measured steps, Papa inched forward but crouched with knife poised. … Squinting he gazed down, eyes adjusting to the shadows, gradually extending the little torch from side to side and then again forward to examine the entire body.

“Good God, man! What’s happened to you?” Papa frantically waved me over while he bent down to assist. There at his feet was a bloody mess of a man. Not just anyone, but a very tall thin man in an Imperial officer’s uniform.

Moving back to the fire for a proper torch, I glanced back as Papa gingerly eased the body over, supporting the man to an upright resting position while cradling him from the rear. …“Soldier! You name?”

The man stirred and mumbled something.

The formality of the request startled the man, and he struggled to remain awake and attentive. Licking his lips he tried again, weakly and concentrating, “Kovnik … Charles … Lieutenant.” …

Papa dragged him a few feet, propping him against a tree. Coming around to face him, he posed another question. “What regiment?”

The man hesitated, struggling to remain alert, not sure if he could trust us. Then slowly and with pain he hoarsely spoke, “Imperial Life Guard. Volhynia Regiment. St. Petersburg.”

For more than two hundred years, the Tsar’s private and elite soldiers have been the core of order and stability in civilized Russia. The Imperial Life Guards were formed in 1690, and their reputation is legendary.

In southern Ukraine in the 1850s, however, the historic canvas of decay and poisonous alliances are weakening traditional monarchies and governments. Political unrest abounds, and medieval processes are giving way to contemporary acts of insurrection, greed and disloyalty.

Growing up in a small village, young Samuel Orloff is obsessed with learning everything he can about his father’s secret past, the Imperial Life Guards, and their mission. Amid a sea of chaotic change, Samuel’s father rescues Charles Kovnik, an injured Imperial Life Guard, from a creek near their home and nurses him back to life. Now mentored by Charles and bound by inseparable events beyond his control, Samuel discovers life paths are not always chosen as revelations about his family’s history become just as important as the realization for his future.

The Tsar’s Guard is the compelling story of a boy’s coming-of-age journey in mid-nineteenth-century Russia as he attempts to fulfill his dream of becoming one of the Tsar’s trusted Imperial Life Guards.

L. L. Otto was born in British Columbia, Canada and graduated from the University of British Columbia. He earned an MBA from the Edinburgh Business School at Heriot-Watt University. He owns and manages a valuation consulting firm in London, Ontario, where he lives with his wife, close to their sons and families.