Sophie and Jack: A Pirate Adventure 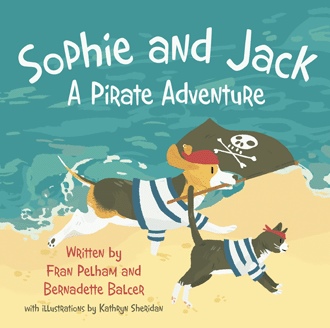 The turtle pirates wore gold earrings
and crooked scarves on their heads.

“Ahoy, mateys,” the captain called out.
He put down his spy glass.
“Come aboard, lassie and laddie,” he said, throwing a rope to Sophie and Jack.

His mates hoisted the surfboard on deck.
The turtles seemed friendly, but smelled stinky.

A parrot that sat on a perch spit peanut shells at Sophie.

“Arrgh,” said the captain. “What’s in your bottle, lassie?”

Sophie pulled the map from the bottle.
The captain looked it over.

“I think we can help you find this treasure,” he grinned.

That night Sophie and Jack ate at the Captain’s table.
Sophie was especially fond of the fish stew.

In the morning a red-haired pirate
greeted Sophie and Jack.
“I’m Shelly. Get up,” she commanded.
“I will dress you like true pirates.”

She placed a black patch over Jack’s eye.
Then she tied red bandanas over their heads
and handed them striped shirts.

Sophie the cat and Jack the dog are bored; what they need is a little fun! They love swimming, surfing, and treasure hunting. The two adventurers find a treasure map that brings them face to face with pirates. This might not be the fun they had in mind!

If you like cats, dogs, and pirates, then follow Sophie and Jack as they run across the sand, into the ocean, and over the waves on an epic adventure to find a mysterious treasure. You’ll travel with them on a pirate ship, where you’ll meet some strange and unusual mateys.

Join Sophie and Jack on their fun and exciting treasure hunt, and then, after their story, find some pirate activities of your own--like making coins, maps, and cakes. You can leave your boredom behind with this adventurous pair of furry friends.

Fran Pelham, EdD, and Bernadette Balcer, PhD, both teachers, coauthored The Search for the Atocha Treasure, Philadelphia: A Downtown America Book, and the original Sophie and Jack. Their stories have been published in magazines such as Highlights for Children and Junior Trails. They love frisky animals, jolly pirates, and making children laugh.