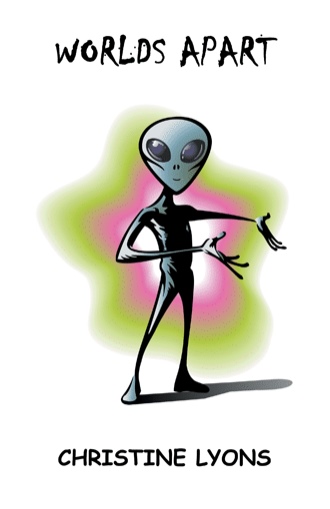 In Worlds Apart a human family crash lands on a strange planet where they are captured by aliens who place them in their zoo. The Alien Elders experiment on the humans in order to understand human abilities and emotions while the other aliens view them in captivity.

Ryan, the human child, makes friends with Humphree, an alien child. Together they formulate a plan so that Ryan and his family can escape. However, all is not as it seems. Revelation after revelation unravels mysterious secrets about the aliens.

In Ryan’s world, the sun is purple, the air is a green mist, and there are bars on the window. He and his family are prisoners—an exhibit in an alien zoo. But one day, while playing hoops in the outdoor compound, Ryan meets Humphree, an alien figure who comes and goes mysteriously. It’s then that Ryan discovers not only a special disc, but also a tunnel that leads to another world—one where the sun is yellow, the grass is green, and the sky is blue.

As Ryan explores, he wonders about his family’s current circumstances. He cannot question his parents because he believes all of their lives are monitored by cameras and listening devices. The alien elders experiment on the humans in order to understand human behaviours, abilities and emotions, while the other aliens view them in captivity.

Together, Ryan and Humphree formulate an escape plan for the family. However, not everything is as it seems. Revelation after revelation unravels mysterious secrets about the aliens.

Christine Lyons is a retired teacher who has always enjoyed writing stories. She lives with her husband, John, in a country cottage near a small lake in Ontario, Canada. They have two married sons and three cats.