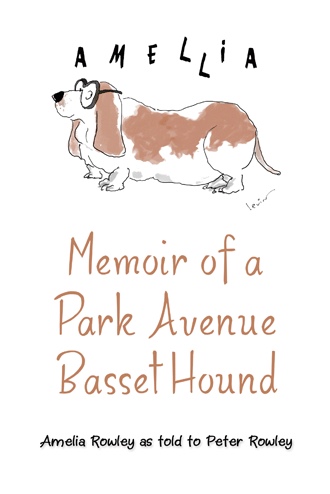 I was born on a ticky-tacky basset hound farm in South Jersey, surrounded by elm trees, long grass, muddy fields, and unkempt bushes, but I have since risen in the world. When I was born, my two brothers, two sisters, and mother died.
It was a cold and snowy night. The wind was whistling through the big elms on the O’Dell farmstead. As I peeked around one of my soft floppy ears, I could see four other baby bassets and my mother lying on straw.
A female human voice above me, belonging to its fat frowzy owner, said in a harsh South Jersey twang, “They’re dead. Goddammit. Except for one!”
A male voice uttered a string of words, which were so profane that to this day, I blush at the very memory of them.
“The sooner we sell her, the better,” said the woman.
The lights went out, and I was left alone to cry over my siblings and mother as the curses grew fainter in the darkness. Their bodies were very still.
The next day, an unfamiliar man appeared with a large plastic bag and a shovel and took their bodies. I was left alone in my cage except for the sound of the birds in the trees and dogs yapping in other cages. The iron door of my cage then opened, and a bottle with a rubber tip was shoved in my mouth.
“She’s a pretty little thing,” said Mrs. O’Dell to no one in particular. “We should be able to get a thousand dollars for her. She’s pedigree.” I had no idea what she meant. I could hear the dogs in other cages and wished my brothers, sisters, and mommy were alive.

Four months later, I heard a car drive up. I had grown considerably. I waddled on my short stumpy legs to the edge of my cage.
“I’ll sell her to you at a discount price—only a thousand dollars. She’s got all her shots, and she’ll be trained in a month,” I heard Mrs. O’Dell say. I knew the last basset hound puppy had been sold for seven hundred dollars. I had no idea what she meant by being trained.
Looking into my cage were two strangers and Mrs. O’Dell, her arms crossed over her substantial chest.
One of the strangers was a blonde, middle-aged lady (she wore only a small amount of lipstick compared to Mrs. O’Dell’s, who looked as if her makeup had been laid on with a spade and whose hair had been lacquered into an immovable bush), and the other was a very pretty teenage girl in blue jeans and a blouse that fitted her young body well.
“She’s adorable,” said the lady who sounded different from the other humans I had heard.
“She looks just like Flora as a puppy,” said the girl in an American voice.
I heard later that the husband of the blonde lady with the mellifluous voice (she turned out to be of Hungarian origin, by the way) had stayed in their car, depressed by the very thought of my becoming a member of his upmarket family.
The next thing I knew, I was flopped down (I weighed only fifteen pounds then) on the style section of the New York Times in the back of an SUV. My new owners had placed me there. “If we shut the rear door, she won’t escape,” I heard one of them say.
It was a very warm sticky afternoon, and we were heading north on the Jersey Turnpike to New York City, where I currently reside. When we stopped at a gas station near Exit 9, I could smell burgers and hot dogs from the nearby fast-food restaurants. I did not like the idea of dogs being burned on a hot summer day. It was only later I learned that hot dogs were not made out of baby bassets and other breeds. What a relief that was because I had not been well-treated at the O’Dell kennels, and I was afraid of many things.

From a humble basset hound breeding farm in New Jersey to high-end Park Avenue domicile and beyond, author Peter Rowley serves up a charmingly picaresque view of the world as perceived thirteen inches off the ground by lovable, floppy-eared protagonist, Amelia. In Memoir of a Park Avenue Basset Hound, fate smiles upon this all-seeing pooch when she barely manages to slip into this world while tragically losing her mother and siblings. As she grows, no detail escapes her sad-eyed, sardonic scrutiny as she candidly shares cravings and passions, personal philosophy, and her yearning for four-legged companionship. And, of course, comes the day that Bo--an endearing male cockerpoo weighing all of six pounds--enters the life of sixty-five-pound Amelia, instantly triggering a seismic retilting of her universe.

Memoir of a Park Avenue Basset Hound narrates a delightful story about Amelia’s clear-eyed gaining of wisdom, her doting family, and her gratitude for a second chance at life in the never-a-dull-moment Rowley household. It offers a renewed insight and appreciation of man’s best friend.

“In this hilarious and touching memoir, Peter Rowley remains unquestionably one of the most surprisingly unsung writers amongst New York literati--and once again, he dazzles us.”
- Armand Assante

Peter Rowley was a well-known reviewer, author, journalist, and playwright. He shared homes in New York and England with wife Terez and daughter Caroline. His books include New Gods in America, Ken Rosewall: Twenty Years at the Top, and Spoils of War: A Trans-Atlantic Tale.