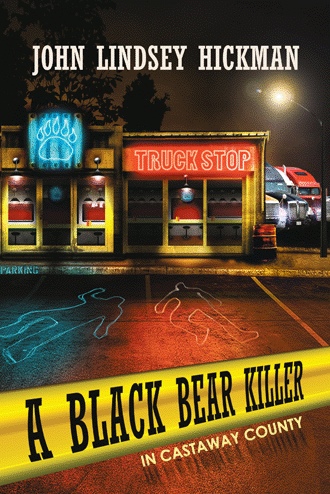 I looked over at the digital clock on my bed stand and read the time to be 3:07 A.M. and simultaneously picked up the phone and said hello.

“Hi, Sheriff, sorry to wake you. It’s Polly from State Police dispatch.” The caller was Polly Hand who was a night dispatcher for the Maine State Police, who also provides my office with coverage when we don’t have our own person on duty.

“Well, it looks like you have a multiple homicide scene out at the old Irving Truck Stop. We have a trooper on the scene and another on the way to help.” She called it the old Irving Truck Stop because, although it was so owned in the past, the Grohe Corporation now owned it, and many long time citizens still referred to it by the Irving name. Mr. Thurston Grohe IV, who owns a huge all-year cabin on a hill above the head of our lake, and the current CEO of the corporation had decided to purchase the truck stop. He had since renamed it the Black Bear Truck Stop in homage to the local citizenry. I’m not sure the name change and purchase helped his image with locals much anyway. Last year Mr. Grohe had called us to respond to his big house because some kids had thrown a couple of eggs at his front door. He is the type of guy who wanted us to take fingerprints from the eggshells left behind so we could catch the kids. Like it was a heinous crime. Anyway, he had become known as someone who had entirely too much money and too little community spirit. But maybe buying the truck stop and re-naming it would help his image some, who knows.

“Ok, has anyone called my Chief Deputy yet?”

“Ok, Polly. I’ll get dressed and be right over there. I’ll call you when I get to my Tahoe.”

I hung up the phone and rolled back over toward Suzi. Even at this time of the morning she was a beautiful picture. Her lovely skin, beautiful face and, lucky me, she sleeps without clothes most of these summer months. Hey, even a blind squirrel finds a nut now and again! While I was wishing I had more time, I knew that my duties called and I needed to go. As I gave her a kiss on the check to awaken her to tell her I was leaving, her cell phone rang.

“Well, Dell, it must be a big crime, I expect they’re calling me to come in to the studio.”

Suzi’s station, Channel 4 News, wanted her to come in so she could coordinate with the on-site team they were sending to the crime scene to ensure she broke the story on her 6 A.M. broadcast.

Wendell “Dell” Hinton, sheriff of Castaway County, Maine, is happily sleeping when his phone rings in the middle of the night, alerting him to a multiple homicide at a local truck stop. As Dell—who has already solved a ten-year-old cold case during his first term—crawls out of bed, kisses his news anchor girlfriend goodbye, and leaves for the truck stop, he suspects a short night is about to turn into a very long day.

When the sheriff arrives on the gruesome scene, he learns that a game warden and two clerks are victims of an apparent robbery. With Lieutenant Frank Bell of the Maine State Police Bureau of Investigations at the helm, Dell delves into the complex investigation. The only witness to the killings, one of the two clerks, is in a coma and there is no apparent motive besides a botched robbery, so the sheriff begins following a trail of clues that soon lead him to believe he may be dealing with a professional killer rather than an amateur thief.

In this gripping mystery, a sheriff in the north woods of Maine must use his investigative skills and common sense to piece together the puzzle of what really happened at the Black Bear Truck Stop on a warm summer night.

John Hickman worked in law enforcement for over twenty-eight years, spending the majority of his career with the Loudoun County sheriff’s office in Virginia. His varied experience includes serving ten years on the sheriff’s senior staff and publishing articles in American Jails Magazine and the National Sheriff Magazine. John lives in Virginia with his wife, Jennifer. This is the second book in his Castaway County series.