A Witness of History 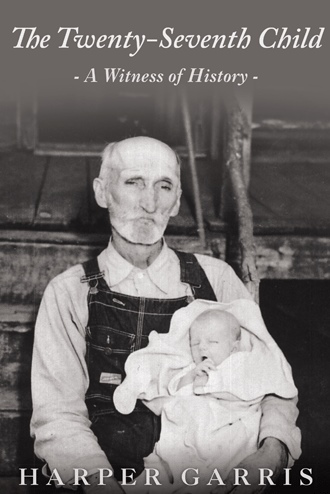 Chapter 1
The era of the Wild West was thought by many historians to begin around late 1840s and began to come to an end in the early to mid-1880s, although some would say the early 1900s.
Billy the Kid was born in Manhattan, NY, New York City November 1859.
Pat Garret shot and killed him in July, of 1882. Jesse James was born in 1847, and died in 1882. Daddy was thirteen years old when Robert Ford shot Jesse in the back while he was hanging a picture of his mother on the wall.
Billy the Kid was born November 1859. Daddy was twelve years old when Sheriff Pat Garret shot and killed Billy in 1881.
The Civil War ended and President Abraham Lincoln was assassinated in the year 1865, Harper Burney Garris was born April 14th 1869, four years after President Lincoln was assassinated.
The name Harper B. Garris is a name that is not nearly as well known as the other names mentioned above.

Chapter 2
Harper B. Garris was not an American President; he was not a Wild West cowboy, bank robber or a murderer. He was a simple farmer, trying to scratch out a living for his family on farms around Waxhaw, North Carolina.
Oh how I wished I could have sit down with Daddy and have him tell me all the stories how life was back in his younger days growing up.
Oh, I know many people were around those days but I’m talking about my daddy, and how he would have told me. Keeping in mind we’re talking about the era of about one hundred and fifty years ago. Four years after the civil war ended. Daddy was born four years after our most popular and well known U.S Presidents: Abraham Lincoln was gunned down in the Ford Theatre in Washington, D.C. four years before daddy was born
I was too young of course, to have known and understand what he would have been telling me about, however I do have many memories of my father. He was a poor man, the years I knew and remembered him, but a man of very much pride. I’ve been told that I was a lot like him in my day. My older brothers and sisters told of his very, very harsh discipline. I never was a witness to any of his actions in that area, with the exception of one.

In 1939, as a farmer tried to scratch out a living for his family in North Carolina, Harper Garris came into the world as his twenty-seventh child. While growing up on a thirty-nine-acre farm in the foothills of the Blue Ridge Mountains, Garris lived in poverty. But when he was suddenly left without a father on a cold winter day, Garris’s life became more challenging than ever.

Garris shares vivid memories from a unique, hardship-filled childhood where he ate biscuits for every meal, relied on the woods as his bathroom, and watched his sisters plow the fields with a mule. As his widowed mother sold the farm and moved the family to Shelby, North Carolina, Garris matured into a teen who was determined to make his mark on the world, with the help of a talented sign painter who gave him a job and mentored him. At age sixteen, Garris moved to Indiana and secured work. While there, he played in a band and met his wife. He chronicles his experiences as he and his wife raised three children, making it clear that his steely determination to persevere is what helped him survive his many challenges.

The Twenty-Seventh Child offers a glimpse into one man’s family history and journey through life as he bravely faced trials and tribulations and learned to embrace his roots.

Harper Garris is the last born of twenty-seven children. In his lifetime, he has been a sign painter, woodworker, musician, and storyteller. Harper and his wife of fifty-three years have three children and live in New Paris, Indiana.