We Must Change the Way We Live 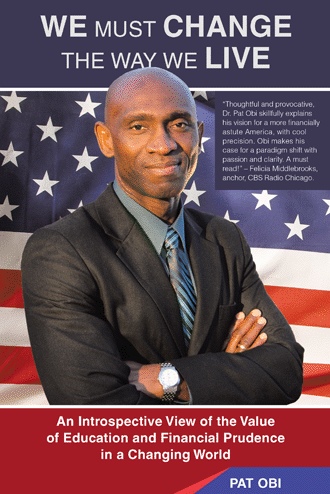 In his 1931 book, The Epic of America, James Truslow Adams writes that the American Dream is the dream of a people “in which life should be better and richer and fuller for everyone, with opportunity for each according to ability or achievement.” This view of our national ethos captures the thrust of this book, which is self-empowerment. Since I first began life in America, I have found that the realization of this dream is premised on three crucial factors: education, hard work, and financial prudence.

From time immemorial, education has been rightfully regarded as the singular factor that unlocks the myriad of opportunities that enable one to compete in the global sphere. The renown of civilizations past and present – Roman, Byzantine, Ottoman, and the epoch of Western Civilization, among others – would not have been possible without the advances they made in science, technology, and leadership. In almost every society, the collective value and potential of educated people is reflected in how, individually, everyone contributes in building up the wealth and strength of the nation. It is also the means by which one is able to help lift up others who are less fortunate. Without the benefits of the skillset that a good education provides, one is limited in his or her ability to be of service to others.

Needless to say, the value of a good education cannot be sustained without hard work and financial prudence. The American nation, from its inception, has exemplified a strong work ethic and creativity by being at the forefront of some of the greatest inventions in modern science, such as electricity, gas-powered automobile, television, rocket science, electronics, appliances, computer, and the Internet. These discoveries have made it possible for Americans to enjoy one of the highest standards of living, which is the reason many people in and outside of the United States view America as the land of opportunity. Precisely for this reason, also, millions from different corners of the globe have endured hardships and paid obscene amounts of money for a chance to study, work, and live in the United States. I happen to be one of them.

Unfortunately, there are some who have a cynical view of America, as an empire whose time would someday come to an end – just as the empires in the past. I disagree with this assessment for three key reasons. First, unlike other powerful nations and empires, the United States is a nation of immigrants and a union of free-willing states and peoples. Second, the United States does not, and has never, coerced any other nation to become a part of it. Finally, and while it remains a work-in-progress, the United States is a self-contained, self-sustained, and vibrant democracy where personal liberties are written into its Bill of Rights.

As I see it, however, the real threat to the strength and stability of the American nation comes, not from political excesses, but rather, from both the combined effects of an underprepared, noncompetitive labor force and financial imprudence. Whereas the benefits of cutting edge education can never be overemphasized, money remains the fuel that runs the engine of our free market economy. For this reason, when prudence is lacking in its use, we face a debacle that could easily undo decades, if not centuries, of hard-won successes, as was hinted by the 2008 financial crisis. My concerns in this respect are informed by what I see as a dichotomy between recent trends in American life and what I have always cherished as the America of my dreams.

Growing up in the late 1960s and early 1970s in the war-ravaged southeastern Nigerian enclave, once known as Biafra, I dreamed earnestly of living in a country where food, peace, and opportunities abound – in that order, actually. In my dreams, I saw America as one such place. Although I was a little more than a toddler at the time, I remember how we starved and lived in great fear during most of the years of that horrendous civil war. Bombs fell everywhere we ran. Babies and children were often abandoned by their parents in the chaos. Many were killed. Many more died of starvation. Millions of children suffered from acute malnutrition and a severe form of protein deficiency called kwashiorkor. We lived mostly in the inner countryside in our attempt to escape the onslaught of falling bombs from the incessant daily air raids of the Nigerian military.

Presented with striking simplicity, We Must Change the Way We Live is a thoughtful and compelling narrative on financial prudence. It offers a simple-to-follow guide on how to plan for advanced education, retirement, debt elimination, and personal investments. It also lays out a reasoned view on how to strengthen America’s leadership in higher education and fiscal discipline.
Unlike most other resources on financial education, the approach in this book is grounded on how we, as individuals, can be best prepared to not only become financially independent, but also, and perhaps even more important, offer a helping hand to others who otherwise would be limited in their own efforts to succeed. The author’s early struggles in life, his humble beginnings as a naturalized American, and the unparalleled opportunities that America continues to offer, bolster the argument for self-empowerment. In that sense, this book begins with a thoughtful reflection on the core American values of hard work and excellence, both of which helped build this nation into an enviable destination for those seeking to actualize their dreams of a better life.
At the dawn of the 21st Century, two important phenomena that gained renewed attention were globalization and financial crisis. Globalization is the reality of how economic integration among nations has heightened the pace of international competition, especially in commerce and technology. The collapse of the U.S. housing market in 2007, and the financial crisis that followed it, exposed the fragility of our financial system, in particular, when financial prudence is overlooked. In We Must Change the Way We Live, these events are used as a backdrop in articulating how we can advance our competencies to meet the rising challenges of the highly competitive and ever changing global economy.

Pat Obi holds a Ph.D. in finance and has an endowed professorship at Purdue University Calumet. With professional engagements in five continents, he’s the author of over 50 publications and has won numerous awards, including Teacher-of-the-Year and Distinguished Faculty Lecturer. A 1960’s child of war-torn Nigeria and educated in the United States, he lives in Chicago.