The Story of the First Mail Girl 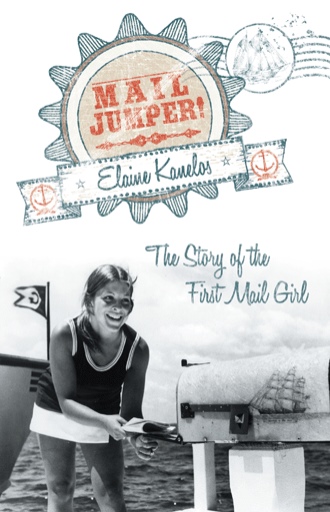 Like all the other summer residents, I arrived at the Lake the weekend after the school year ended and left a day or two before school started again after Labor Day. Between those two dates, I only put shoes on to go to fish fry dinners or for the two or three trips per summer we made into town. My friends all belonged to other summer families. We spent every day of the summer together and then we went back to wherever it was we had come from and didn’t see, talk to, or even think about one another until summer came again.
Similar to many of the other summer residents on the Lake, we didn’t have a ‘land’ mail box, we only had the mailbox nailed to the pier post. In the eyes of the U.S. Post Office, our only address was Pier 668.
The Mail Boat and the Mail Jumper were legends to me and all my friends. The Mail Boat came every day. The second one of us spotted it or heard its horn blow, all action stopped. In those days, the Mail Boat was not the Walworth II that I jumped the mail from and which the mail is still delivered by today. It was the original Walworth, built in 1916 for sightseeing on the Lake and became the first Mail Boat when water delivery officially started that same year.
A seventy-four foot steamship, she had an elegantly bowed hull, narrow beam and a deck low to the waterline, similar to many of the other Geneva Lake steamships of the era. By the time she was delivering mail to my pier, the Walworth had been carrying passengers and mail around the Lake for nearly 50 years.
On our stretch of the south shore, mail was delivered to four piers in a row. At our low point on the Lake, the Mail Boat and Mail Jumper were visible for the entire four pier series and we wanted to see every bit of action. On any given day, our gang of kids rushed out onto whichever pier we were closest to in order to have the best possible view of the brave Mail Boy risking it all by jumping off the fast-moving Walworth.
By the time the Mail Boat reached our part of the Lake, we had been in the water for hours. But toast brown and sopping wet, we stopped everything for those few minutes to soak in every detail of the day’s delivery.
Sometimes, one of us would stand at the very tip of the pier and hold out a hand so that the Mail Boy could lean out, one knee hitched over the Walworth’s mahogany handrail and hand us the mail. That was daring on our part, but it didn’t happen very often. We all preferred to watch him jump. Seeing the Mail Boy jump off of the moving boat packed full of wide-eyed passengers was the pinnacle. The best of everything.
It was the sun, the water, the captain telling his tales of the Lake over the boat’s PA system, the tourists, the speed and the Mail Jumper. It was magic.
First there was the approach. The boat came incredibly close to the pier, but still far enough away that the Mail Boy had to leap across four to six feet of water to reach the pier. The Mail Boat never stopped – that was the amazing thing about it! And since it wasn’t stopping, it came at us far faster than any other boat would ever approach a pier. Mail in hand, the Jumper climbed out of the boat entirely and stood on the boat’s narrow rub rail. He held the mail in his right hand and used his left to grasp a thin, horizontal bar that ran the length of the boat’s starboard side at about eye level.
His eyes were focused. You could see him planning. Getting ready. Deciding on the right moment, the split-second when his decision was made.
Then came the jump. It was always so fast. He was on the pier. He was at the box. The mailbox door was open. The mail was in the box. The mailbox door slammed shut. He spun, took a few steps, then with a leap he was back on the still speeding boat.
And then they were gone.
It was all so fast, so spectacular. We didn’t want to move. We didn’t want to breathe. We certainly didn’t want to blink. Blink and you missed it.
Our mailbox was nailed to the second to last post on the narrow, left side of the second boat slip. This made delivery at our pier more harrowing than most because that section of pier was quite narrow and because the Walworth had to approach at an angle, with the bow aimed out, rather than being able to slip by parallel to pier as was ideal. This meant less boat-side access to the pier and a curved, backward jump for the Mail Boy.
This was clearly a precision jump. No room for error here. Maybe we heard this from our parents, but we believed that we had one of the harder jumps on the Mail Boat route, and we didn’t want to be absent or otherwise engaged when the Mail Boy finally missed and went in the drink right at our house.
This never happened. But not for want of trying to make it happen. As the years passed and our neighborhood group got older, we spent hours devising ways to foil the Mail Boys’ incredible luck. We poured buckets of water on the pier minutes before the Walworth arrived. We yelled and screamed to distract the Jumper. We put dead fish and dried up crabs in the mailbox to disorient him. We even threatened to soap down the pier, but someone’s parent always intervened before we could actually try it.

From the age of six, author Elaine Kanelos knew one thing: she wanted to deliver the mail on Lake Geneva’s US mail boat. In this memoir, she recalls how she achieved her dream and explains how mail jumpers do their job. She recounts close calls on the boat and lakeside high jinks with coworkers and friends as well as a multitude of joyous adventures on the waters of one of the Midwest’s most beautiful lakes.

In Mail Jumper!, the journey begins at Kanelos’s summer home in one of the lake’s beautiful historic mansions. From there, she describes a host of her escapades and mishaps growing up on the lake. She also goes inside the world of many of Lake Geneva’s homes and iconic places and shares the story of her twenty-seven years on the lake.

Familiar, funny, and full of heart, this personal narrative provides a one-of-a-kind glimpse into the world of the mail jumpers from the girl who did it first. It draws back the curtain on the US mail boat, Lake Geneva’s history, and life in its inner circle, as Kanelos remembers becoming the first girl to break a sixty-year tradition by jumping the US mail.

Elaine Kanelos was featured on the cover of the Wall Street Journal and newspapers worldwide as the first girl to “jump the mail.” She splits her time between Vail, Colorado, and Santa Monica, California.