Show Dogs Escape to the Seashore 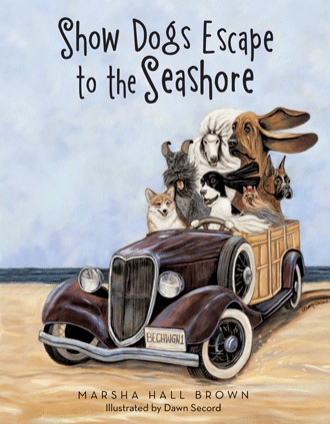 When the seven spectacular show dogs enter the Best in Show ring at Old Sachem Kennel Club on this hot and dusty afternoon, they are not prepared for the event that follows. A skinny dark brown puppy sneaks into the ring, grabs the huge Best in Show ribbon in its mouth and races away. The dogs in the ring and the dogs in the gallery cry out in dismay, hoping to stop the imposter by alerting the attention of the show officials. Who is this intruder? Who ruined the show? Back in the grooming tent, the show dogs complain: they are sick of travel; they hate their crates, their leashes, and x-pens. The food is horrible and there is no time to play. So Bloodhound, Poodle, Kerry Blue, Boxer, Springer, Corgi, and Yorkie devise a plan of escape. The seven sneak off in the night and begin their trip to the island out at sea. But they are not alone. An unexpected visitor gives the sensational seven more than they bargained for. What follows is a tale of competition, cooperation, and ultimately, friendship.

Show Dogs Escape to the Seashore is created to celebrate the world of dog shows, to teach about pure-bred dogs, to involve both children and adults In a trip to a seaside vacation, and to engage readers in thinking about the importance of relationships, cooperation and competition.

This is a fanciful adventure for children and the family members who read with them – especially compelling to the tens of thousands who are active in the sport of dogs. With unique, breed-specific illustrations that introduce many kinds of pure-bred dogs as they travel to Sherburne-at-Sea for vacation, “Escape” follows the show dogs from trains, boats, planes, and woodies to windmills, beaches and a haunted house.

Moments after seven spectacular show dogs enter the Best in Show ring at Old Sachem Kennel Club, a skinny puppy sneaks into the ring, grabs the Best in Show ribbon in its mouth, and races away. After the dogs in the ring and gallery yelp in dismay, a brave Bulldog chases the puppy, rescues the rosette, and returns it to the judge. But there is no question that the puppy has stolen the show.

Back in the grooming tent, the show dogs complain. Sick of the travel, the food, and their crates, Bloodhound, Poodle, Kerry Blue, Boxer, Springer, Corgi, and Yorkie devise an escape plan. After the dogs sneak off in the night to begin a seaside vacation, they have no idea that their group has grown by one. As they travel by boat, train, plane, and an old woody convertible, the dogs learn about the importance of cooperation, competition, and ultimately, friendship.

In this fanciful children’s tale, a group of show dogs embarks on an adventure that takes them on trains, boats, planes, and cars and leads them from windmills to beaches to a haunted house, as they discover what it truly means to be champions.