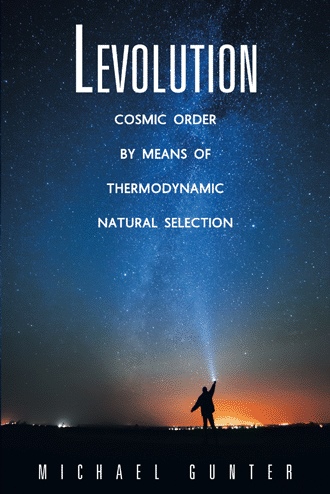 Levolution as a Process

Without Levolution, there would be no gravity, stars, or life; but up until now, the self-similar properties these energetic systems has been obscured.

Michael Gunter, an ecologist, examines the Levolution process, which underlies a whole new paradigm that explains how the universe works and what it is doing. It is responsible for creating every type of naturally occurring system we know.

In easy-to-understand language, Gunter explains how Levolution is based on simple properties of energy flowing in systems. Learning how it works will help you understand: • the cosmological relevance of energy and its laws; • the contents of the universe as twenty- three levels of increasing, entropically functional order imposed on a single batch of energy; • that the universe appears to have a purpose.

The end result is an entirely new perspective on what we call “order” and a new spin on what ancient and recent thinkers have said about the nature of the universe.

The newly proposed Laws of Functional Order will equip you to understand the profound role of thermodynamic natural selection, universal evolution, and the cosmic order caused by Levolution.

Michael Gunter conducted research and studied evolutionary ecology at the University of Texas and the University of Kansas before spending a decade as an environmental consultant evaluating energy projects. Energy is central to ecology and to economics, and his diverse scientific background has contributed to a new perspective. Here he unleashes a grand theory and reveals his passion as a revisionist thinker and cosmic ecologist with a new perspective on energy, cosmic order, and the entropic project of the universe.