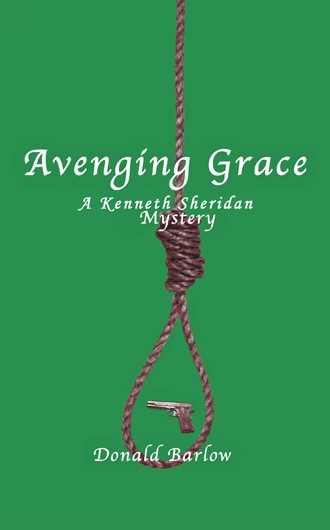 The overhead light clicked on and I sat up on the couch instantly, like a small boy caught looking at girlie mags under the covers. A bucket with a mop pushed past the open doorway followed by the wiry, straight figure of Leroy Lincoln. He caught the motion out of the corner of his eye and looked down his nose at me with a great deal of disdain. “Decent folks are home by now.” I let that one go by. “Decent folks don’t stink of whiskey.” I wiped my eyes because I couldn’t think of a good one for that either. He sniffed indignantly, “Decent folks don’t sleep on the couch in their clothes, neither.” “Leroy, leave me alone.” There. I tried, but he was begging for it. Leroy sniffed again. “You never liked me because I’m African American.” I was beginning to pull myself together: “Anyone old enough to be named ‘Leroy’ is at least ‘Negro’ and more likely ‘colored.’” Leroy sniffed again. “If I was twenty years younger, I’d whip your racist ass. Just might call my son over and have him do it for me now.” I sat up and washed my hands through my hair. The toothbrush glass was at my feet and still had some liquid smooth in it. I almost retched. “Leroy, I’d be tap dancing on your son’s head while he’d still be trying to unfasten his Rolex. Now why not leave this office alone tonight? I won’t tell Rhodes.” “Big shot detective trying to order the working man around.” “Leroy, my head hurts and my stomach wants to leap out the window — ” “This would interest you: I was reading one of those detective books the other day. Know what’s wrong with them? Okay, I’ll tell you. Seems like they’re always in the first person. Know what’s wrong with that? — you know, you do look a little peaked — well, I’ll tell you what’s wrong with that. If it’s in the first person, then you know the detective isn’t going to get killed. Where’s the suspense, I ask you. If you throw up on that carpet, it’ll be you who cleans up the mess.” He paused, his long dark fingers doing things to his gray chin. “I suppose it could be like Hamlet’s father — ” “Hamlet’s father wrote a detective book?” I thought if I didn’t say something, the old coot would go on like this all night. “No, I mean he could come back after he was murdered, to tell his story.” “Hamlet’s father was murdered?” He shook his head, sniffed and gave me a look of withering disdain. “Yeah, don’t you remember?” he said condescendingly, “He was stabbed at the Forum by Lady Macbeth.” “Oh yeah, that’s right.”

Paul Thornton, millionaire CEO of Thornton Precision Instruments, hires down-on-his-luck private detective, Seattle’s Kenneth Sheridan, to find his missing son Denny—who failed to show up for work eight days ago. Sheridan follows the trail to the abandoned summer home belonging to the millionaire and finds the decaying body of the son, with a handwritten suicide note attached to it. Believing the case is closed, Sheridan returns to his practice. After several months, the father returns to Sheridan with new evidence the young man did not commit suicide, but was murdered. He promises Sheridan a small fortune if the detective can set the record straight and see that the murderer is properly brought to justice. Sheridan reopens the case, and through a series of exciting and humorously drawn clue-driven events, finds not only is there a murder, but a small child, Grace, was molested. A devotee to the Japanese admonition, “The wise falcon conceals his talons,” Sheridan disarms wary opponents by hiding himself behind a veneer of soft-spoken ineptitude. Taking advantage of the circumstances at hand, in the role of Avenging Angel, he resolves the case with murderous efficiency.

Donald Barlow earned a bachelor’s degree in Japanese language from the University of Washington. He resides in Mountlake Terrace, Washington.