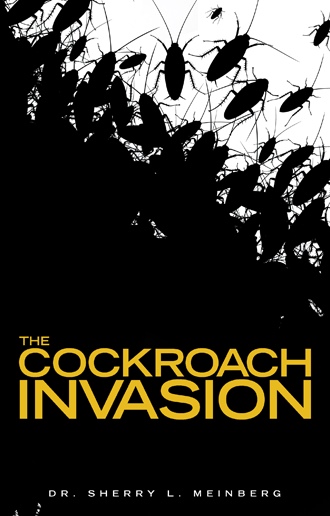 Much yelling and screaming could be heard coming from the Boys’ Room.

“Look out! One’s getting away!”

A lot of movement and many voices were heard from inside the room. Much pushing and shoving was going on. The boys were being rowdy and loud. They were having lots of fun.

All of the noise and nonsense attracted a large crowd of students from the playground. Lured by the racket, the girls quickly came to see what the trouble was all about. They gathered around the steps in front of the doors to the Boys’ Room.

“What’s going on in there?” asked Velvet.

“It sounds like they’re having a party in there!” agreed Emerald.

“They are!” shouted Ling. “Another CRUNCHING PARTY!” She always figured things out really fast.

“Ooooo!” many voices said together.

“Yuck!” said others. Everyone laughed.

Even though the girls did not like CRUNCHING PARTIES, they were curious. They wished they could see what was happening. It sounded so exciting. But the Boys’ Room was private. The girls had to wait for someone to come out and tell them what was going on. But none of the boys came back outside. They were having such a good time.

“There sure must be a lot of cockroaches in there,” said Ling, as the girls nodded in agreement.

“Yeah,” worried Willow. “This has been going on for a loooog time.”

“There must be hundreds of cockroaches in there!” said Emerald.

“There must be thousands of cockroaches in there!” said Bella.

“Ugh!” laughed all the girls, dancing around together. Some of them made silly gagging sounds.

“Millions of cockroaches!” chanted the crowd.

A couple of boys came running up to the large group of girls surrounding the lavatory stairs. “What’s going on?” they asked.

“Hot dog!” Zak was thrilled to hear the news.

“Alright!” said Carson, as they high-fived their hands together.

“Hey, guys!” shouted Zak to some other third grade boys on the far playground. “Come on!” he motioned with his arm. “A CRUNCHING PARTY!”

“Ya-hoo!” Other boys quickly ran to join the party. “Coming through!” they happily yelled, as they pushed through the crowd of girls.

“What’s the battle cry?” a voice yelled above the racket.

The boys were really getting rowdy. They were having a wonderful time.

Alerted by all the noise and commotion, the teachers on yard duty finally began walking towards the Boys’ Room. “Uh-oh,” several girls whispered, “Look who’s coming!” Everyone knew that the teachers were going to break up the party. But just then the bell rang. RING! It was time for school to begin. Everyone quickly went to their classes. What an exciting way to start the day!

Nobody loves a cockroach! They make nasty houseguests; the ick factor is very high. But most cockroaches live outdoors and never come in contact with humans. The Cockroach Invasion challenges our assumptions and raises awareness about cockroaches and the role they play in our ecosystem. It expands readers’ minds and stimulates their imaginations, while contributing to the appreciation of biodiversity. It teaches readers to think twice about underloved yet necessary creatures.

The Cockroach Invasion entertains and informs. It is a delightful read for all ages, stunning in its underlying messages: self-reliance, open-mindedness, and respect for all creatures with which we share our world. No matter how you feel about cockroaches, you are guaranteed to find them fascinating!

Dr. Sherry L. Meinberg spent over fifty years as an educator (teacher, librarian, professor, and supervisor of student teachers). Now, instead of being restricted to one classroom, she teaches the world through her books. To date, she has received eighty-four awards. She has been featured on numerous radio, TV, and print media. This is her eleventh book.