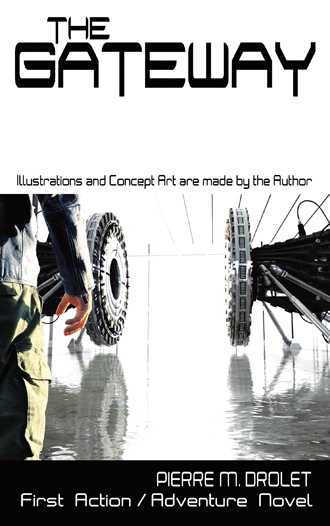 It's hard to believe that the U.S. is at war by looking at the crowd walking peacefully through Times Square enjoying the nightlife. The reality is different for a military unit stepping out of The Copa nightclub. This is the last night before they deploy to Europe from Mitchel Air Force Base located on the Hempstead Plains of Long Island. One of the young soldiers in the group stops and looks up at the large illuminated billboards and buildings around him. He is a bit drunk and starts feeling nostalgic about his hometown. "God I'm gonna miss that." He said to himself. Shortly after he drifts off in his thoughts, two beautiful women passing by get all his attention and one of them looks at him and smiles. He smiles back at her and say, "I'm gonna miss her too. I think I'm in love."
As the soldier stares at the beautiful woman walking away, he suddenly hears a crashing sonic boom in the sky that shocks him and everyone in sight. "What the hell!" He exclaimed.
An eerie silence follows as the crowd in the street is stunned by what has just happened. All eyes are frantically looking up in the sky. A few seconds passed before air raid sirens sound off and searchlights illuminate the sky over the city. Peeking in and out through the cloud with incredible speed, is a fireball heading straight for the city.
The drunken soldier can't believe what he sees and immediately yells. "We're under attack!"
Everybody runs for cover, panic-stricken, creating chaos in the streets. As the fireball gets closer and closer, a sudden change in trajectory switch to a level flight just over the tallest buildings. The shockwave created by the fireball shatters windows and a rain of glass shards falls on the crowded streets. Gradually losing altitude, the fireball continues flying at high speed above the city for many miles until the unimaginable is about to happen. When it reaches the harbor, the fireball still keeps flying over the Hudson River in a collision course with the Statue of Liberty. The impact seems imminent until the fireball comes to a dead stop one hundred feet from Lady Liberty's face. The fireball dissipates and a strange saucer shaped aircraft appears. Still smoking, the brownish metallic aircraft is sixty feet in diameter and looks like a squashed bell. The aircraft is silently hovering and wobbling, as it's defying gravity.

Three miles away, two Curtiss P-40 fighter planes are flying in the area to intercept the uninvited UFO. As they approach it, both pilots stare in disbelief. "What the hell is that?" The lieutenant exclaimed, speaking into his headset microphone.
"I don’t know but it’s definitely not one of ours." The captain changes the radio channel. "Control tower this is Tiger One. I have visual contact on one foo fighter, possibly hostile. Request authorization to open fire."
"Authorization granted Tiger One." The control tower operator said through heavy static interference.
The captain changes course and engages the aircraft. "Roger that."
As soon as the crosshairs lock onto the target, the captain opens fire. A trail of lead hits the enemy aircraft with unexpected results. Very little damage seems to be inflicted on the UFO, it is as if the bullets are decelerating drastically a few inches before bouncing off the surface of the aircraft. Both pilots are puzzled at this first attack, and the lieutenant is getting worried as he calls out, "We're gonna need bigger guns."
The aircraft starts to move slowly in a clumsy wobbling way. "Maybe not." The captain says, looking at the foo fighter struggling. "Here's our chance to finish it."
Both P-40s engage the target for a second attack, and open fire again. The result appears to be the same as the bullets bounce off the surface of the UFO but, this time it makes an evasive maneuver before accelerating to an incredible speed and then disappears.
"Holy shit! Did you see that?" The lieutenant cried out.
"Yeah, I wish I hadn't..." The captain changes the radio channel one more time. "Control tower this is Tiger One, can you see the foo fighter on your radar?"
The pilot hears a few seconds of static noise in his headphone before the control tower responds. "Negative Tiger One." The man replied from the control tower.
The captain concludes. "Whatever it was, it's now gone."
Both P-40 break the pursuit and return to the base.

Having grown up gifted and graduated from MIT with a degree in electrical engineering, Matthew Schauberger joined the Marine Corp due to his thirst for adventure and new challenges.

Now in his early thirties, he’s retiring as a major after ten years of service. A gifted fighter pilot and engineer, Matt is pursued by the technology company his late father once worked for. At the company, he discovers his father’s lifetime work to build a time machine and is deceived into completing the project. During the process, he stumbles upon a dark family secret and the origin of this technology.

In Nazi Germany during World War II, his own grandfather was a scientist who led a top-secret project involving the development of a powerful electromagnetic engine capable of propelling flying saucer-shaped aircraft. At the end of the war in 1945, this technology was brought to the United States through Operation Paperclip, and it has evolved since then.

Facing a powerful, immoral business tycoon, the pilot ends up traveling back in time in an attempt to save his father and keep the project out of malicious hands.

Pierre M. Drolet was born a Canadian but recently became a US citizen. He is known for his work as a CGI visual effects artist and designer, having worked on numerous television shows and films, including several incarnations of Star Trek, Battlestar Galactica, and Firefly. This is his debut book.
Visit him online at http://www.pierre-drolet-sci-fi-museum.com.