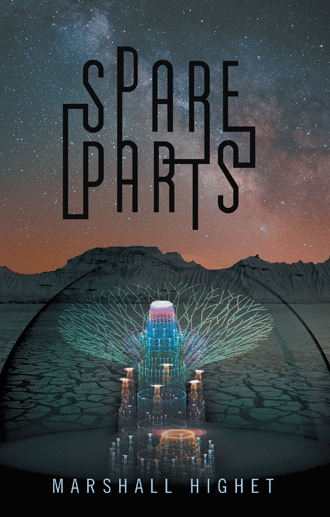 Lynx, Slug, and LeftEye were working the crowd at the bazaar. Lynx looked up from his post as scout to the falling drops dappling his face. It was Raintime, meaning it was exactly three o’clock. The rain helped disguise the boys’ actions with its uniform downpour, drenching the plants that grew from every rooftop and open area in Middlespace.

Today, Middlespace was crowded with vendors. A-ones came down to shop once a week, which was why the three teenagers had come up from Below. Everyone in the Dome knew that the A-ones didn't really need anything, and if they did they would just take it any how, but it was a way to keep the lower downs happy and feeling useful, so the A-ones humored them.

The three boys shadowed a tall A-one man in a gray cloak. The cloak had recently become stylish, thanks to some well-placed video-boards, and the boys were fans. It was easier to pickpocket someone in a short cloak. Slug sidled up as the man stopped to examine some crickets as large as loaves of bread, dried and ready for boiling. As the man was leaning down, Slug went in for the steal, slipping his hand underneath the thick fabric of the cloak, hunting for the satchel that most men wore against their backs. The man whirled and grabbed Slug’s wrist, the hood of his cloak falling back to reveal his tightened jaw.

“Not today, scavenger,” the man growled. “I’m kind of glad you did that.”

Slug’s eyes were glassy with surprise. The man reached under his cloak and pulled out an ominous looking tube. He pressed a button and the tube began to glow, filling the air with the crackle and acrid scent of a Lasertube. “It gives me an excuse to do this,” he said, aiming the tube at Slug’s chest. Suddenly a fiery blast sliced between Slug and the man, sizzling the man’s arm, leaving a black tear in the heavy gray fabric of his cloak.

“What the?!?!?” the man screamed, jerking his arm back. Ten feet away, LeftEye raised his hood, covering his glowing red eye. Slug was off, ducking and dodging through the throng of shoppers and hawkers. The man barrelled after him, bellowing as he went. Lynx sprinted after them at a distance, sure that LeftEye was close behind him. Slug ran for all he

As creatures from different worlds, Tesla and Lynx should never have met. The A-ones and Underdwellers don’t mix in the Dome, but Tesla is no ordinary A-one. She isn’t afraid to question everything.

Her entire life, she had been taught that the Underdwellers lacked the basic capacity to love or understand the high moral ground of loyalty. Something in her always questioned the absolute truth of this kind of prejudicial thinking. Then, quite by accident, she witnesses something that shakes her already shaky faith in these beliefs. Captivated, she watches Lynx, an Underdweller, defend a friend—an act she was told was impossible for these brutish creatures. In that moment, she knows that she doesn’t know the truth. Tesla saves Lynx from certain death and, in a moment of inspiration and fear, asks him for a favor that puts them both in danger. It’s a favor that could be the undoing of the Dome itself.

Raised on a diet of Asimov and Bradbury, Marshall Highet has always had a strong interest in the imagination. Creating other worlds is one of her keenest interests. When she isn’t writing, Highet teaches at a college in Vermont. Spare Parts is the first of a planned series.