The Enlightenment of Jason Albrecht 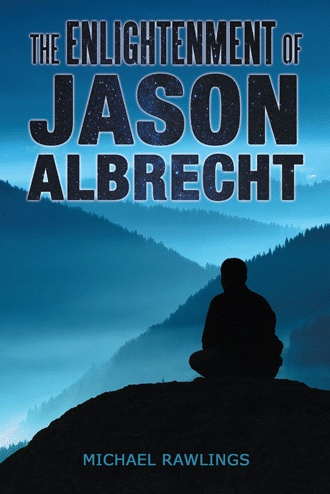 …The snow was beginning to swirl, accompanied by a bone-chilling nine degrees. As the unlikely nursemaid, I remained almost entirely in the company of my patient for the next three days and did little more than meditate, feed the stove, and force sustenance upon the beast. Wanting to do whatever I could to encourage improvement, I often put my hand on the leg at the place of the break and focused the warmth of my grasp.
On the morning of the fourth day, after I awoke to stoke the morning fire against the cold morning air, I moved toward the animal, and to my amazement, it stood up! I momentarily froze in disbelief and then rushed to the house to call the vet to notify him of the miraculous development. The doctor arrived within the hour to examine the patient and was dumbfounded at the apparent healing.
“I don’t know what to make of this, but you guys appear to be on the verge of a dilemma.” Shaking his head, he walked to his truck. “No charge, boys! Good luck—you’re gonna need it!”
It was only a few days later when the obvious choice came, and we were in agreement to leave the door of the tool shed open, come what may.
I was truly thankful to return to the comfort of the cabin and the companionship of my friends in the evening. John and I reengaged with a vengeance in our usual evening banter about religion, agreeing that prayer was speaking with God and meditation was essentially listening for God—a small but important distinction. Prayer was asking for guidance, and meditation was listening for guidance in search of God in human experience, and in this, there was substantial common ground in our discussions. I talked at length about an evolving belief that consciousness was a stratagem of frequency, resonating within us in sympathy with the universe. I suggested that to harness an understanding of spiritual reality, one would have to consider the existence of essential aspects of our being that are not perceived by the five physical senses. I forwarded the idea that spirit extends beyond a physical nature and is accommodative of prayer and meditation, quieting thoughts in favor of a perception and guidance of intuition. We could agree that we all struggle to bring the actuality of spirit into the physical world of our lives—though perhaps by different means. There certainly were questions to consider here. Can we “tune” ourselves to a resonance in spirit and thereby affect outcomes in our daily lives? When we pray for forgiveness and for the strength to know what to do with challenges in life, are we not tuning wakefulness to an internal presence beyond a world known by physical senses alone? Are we speaking with ourselves in prayer and meditation, in a conversation with God consciousness, seeking lives awakened in a spiritual reality found within ourselves?
John and I shared thoughts about what is meant by self-realization and an inner self, and we tended to agree that these realities are found by different routes and ritual, but compelled by a pursuit of the same destination.
As the winter months passed, advancing toward the day of a newborn child and their young family, it would soon be time for me to move on. Having enjoyed the North Country in communion with friends, I would be going to certain but unknown destinations, with memories in matters of the heart that would fill my sails for years to come and—just perhaps—for eternity.

… Lately, daily meditation had taken on a noticeable substance, if that is a correct way to describe it. While meditating on a tone the past year, I had become increasingly aware of a pan-tonal sound always in residence in the background. This internal sensation was like a primordial static against which thoughts materialized and disappeared, and by concentrating on a tone and then this background sound, I could focus away from my thoughts and become increasingly calm.
John had suggested that I ask God to reveal himself upon reaching a meditative state of alertness, and he always challenged me to explain my goals. Was entertaining myself with an internal focus to attain calm also communion with something spiritual, beyond a limited vantage point? He would say, “Okay, you’re there. Now what?” I knew he was right with the question. Clearly, I was at a juncture in my pursuit of spiritual realization, and I did want to move on to something more actionable and relevant to daily activity. So the question of “Now what?” was of particular importance.
Our discussions were always about thresholds of consciousness, a subliminal, supraliminal, and exo-liminal self that I thought may exist simultaneously in concert with waking consciousness, affecting thoughts and actions. We wondered if memories were generated by physiology and retained postmortem in a kind of collective consciousness. We wondered about the survival of the soul and how our thoughts might be informed about such matters. I asked myself why it is that we talk about “our body,” instinctively and intuitively, not “the body”; “my arm,” not “the arm”; “my thought,” not “the thought”—and all of the possessive descriptions commonly used in life.
After all, who and what is me in the use of my?
I thought about the quickening to health of a young buck and whether the effect that I had on circumstance was a result of something more than the warmth of my touch or a biochemical response. Did nature willfully conspire to present a wild animal for compassion? Were the many stories of healing in history misunderstood phenomena, fanciful thinking? Were the many inexplicable accounts of healing only matters of unrevealed trickery? Did a comment made on a campfire night almost two years ago quiet a group of loggers inwardly for the night because the comment was peculiar or because the comment somehow pierced the psyche of my companions in such a way as to turn them inwardly?

… I crawled into campus early on a Saturday morning and spotted the Ye Olde Diner. I’ll start there for coffee and breakfast before trying to find a hotel, I thought. A waitress or waiter might be a good source of conversation about my situation, and just maybe I would get a lead to replace the blind faith that had guided me so far.
“Coffee? Party too much last night?” the waiter asked, trying to make conversation with someone who was obviously in dire need.
“No, I just drove in from Detroit … pretty tired … if you could bring me some coffee, scrambled eggs, and wheat toast-that would be great.”
The coffee came quickly, and with my order being handed through the cook’s window, I noticed that there were only a few other brave souls in the room on this early Saturday morning. The ambiance was familiar, comfortable, and quite acceptable, with a small fire crackling in the firebox, warming a room of weathered wood floors and log-hewn ceiling beams. The tables and chairs appeared to be inexpensive, secondhand pieces of wooden furniture, and there was a small bar next to a little stage in the corner that was capable of accommodating a folk singer or combo in the evenings. It was a typical college haunt, it seemed to me.
“I’m Jeff, by the way … Jeff Hostetler,” the waiter proclaimed. Jeff appeared typical of a college student—long, sandy-blond hair resting just below the shoulders, with a rough, two-day-old stubble of a beard, not yet fully mature. He was wearing a wool plaid shirt under his white apron, perfectly joined by washed-out jeans and deck shoes that were past ready for replacement. He obviously was open to the distraction of conversation.

The Enlightenment of Jason Albrecht is a fictional story that speaks to the intrinsic need for spiritual orientation in the human experience. The central character, Jason Albrecht, spends a lifetime of struggle to reconcile religious codification and conventional thinking with the purity of intrinsic desires and realizations. The story follows the life of a carpenter who is intensely interested in philosophy and religion. During the course of Jason’s life, he discovers and then teaches a meditation technique that leads to a unique philosophy in contemplating the wonders of the universe while being sustained by enduring friendships-during and, perhaps, continuing beyond his lifetime. Coming to terms in his final years, Jason Albrecht completes a memoir that tells a story of pain, exhilaration and spiritual realization before finding peace in that final hour that comes for each of us. From the precious idealism of youth to the challenges of adulthood, Jason learns that the material world informs an intrinsic Self and that the experiences of the world and human intuition are necessary companions on an individual journey to maturity in Spirit.

The Enlightenment of Jason Albrecht is the inspirational tale of one man's journey to find spiritual identity in a world of circumstance and allegiance.

Michael Rawlings is a financial advisor who has been active in the savings and loan and investment industries since 1985. He has also enjoyed an extensive career in the arts. Michael and his wife, Linda, live in Cincinnati, Ohio, where they enjoy family activities with their children and grandchildren.