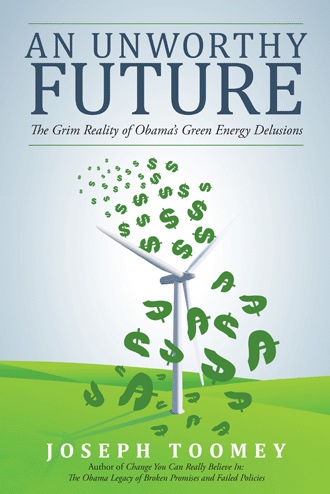 Every available public dollar presents us with a choice to spend it on one thing over every other competing opportunity. How do 'green energy' tradeoffs stack up against real-world option? The $250 million Obama wasted on a bankrupt electric car battery maker could have been used to prevent blindness in 400,000 children suffering from vitamin-A deficiency. Obama created 10 permanent jobs squandering $122 million on Hawaii wind turbines. Instead, the planet could have provided complete Hepatitis-B vaccine coverage averting 150,000 deaths each year. For $200 million, about a third of the amount wasted on Solyndra, we could have supplied low-cost heart attack medications to poor countries that would have prevented 300,000 deaths. For half the amount given by Obama to a Finnish car electric car maker, iodized salt could have been supplied to 80% of the world's poorest people to help them avoid developmental and cognitive problems associated with low-iodine diets.

The UN IPCC estimates that global warming will expose an additional 3% of humanity to the threat of malaria by the year 2100, a controversial claim based on junk science. The panel's recommended solution is to spend anywhere from $40 to $553 trillion between now and the end of the 21st century on CO2 abatement measures. For just $3 billion a year, humanity could provide environmentally safe DDT indoor sprays, mosquito netting and combination therapies that could reduce the number of malaria deaths by half within ten years. That would spare 524,000 lives each year according to World Health Organization mortality figures.

The UN World Food Programme estimates that almost half of the world's deaths each year in children under five result from poor nutrition. That 3.1 million annual death toll could be completely alleviated with just $3.2 billion in food aid. That's less than federal taxpayers squandered in 2012 on Production Tax Credits subsidizing wind farms owned by billionaire investors.

Respiratory illness resulting from indoor air pollution caused by wood and dung fires places an undue burden on the world's poor. These poor ventilation conditions result in pneumonia and other acute lower respiratory infections during childhood. ALRI is the second most frequent cause of death in children under the age of five, resulting in two million deaths per year. That death toll is easily preventable with improved cooking equipment. Just $2.3 billion per year could eradicate these tragic human losses. Compared to the $68.4 billion that was squandered between FY'2008 and FY'2012 on worthless climate change initiatives that have had zero impact on improving either the climate or humanity's basic condition, a mere $5.5 billion for food aid and ventilation improvement doesn't seem like a lot.

The WHO estimates that 45% of all illnesses in poor countries are a result of poverty and are treatable with existing medicines or are preventable through intervention measures. Economic growth would enable poor countries to eliminate most of this human suffering and death. Each ton of carbon-based energy creates, on average, a $6,700 increase in global Gross Domestic Product. That is enough to "sustain" the livelihoods of more than 11 Rwandans using 2012 World Bank GDP data. The surest path to a better future for the world's poor is through access to affordable energy. For each human life that the IPCC's carbon-cutting measures claims to be able to save, humanity could preserve 78,000 lives through a more rational approach of steering funding to where it's really needed.

How does a globe-trotting climate campaigner recommending to the world that it needs to spend trillions of dollars now to avert some imagined catastrophe far off in the future look a destitute villager in the eyes who just lost his child due to malnutrition or malaria, a death that could have been easily prevented with a miniscule amount of useful intervention? How long will this deadly climate charade last?

Global governments, leftist advocates and media cheerleaders were in unanimous agreement hailing the wonderful achievement of the Kyoto protocol. At long last, they said, Kyoto will usher in mankind's climate salvation. Global warming will be eliminated as a planetary threat, right? Guess again. No serious person disputes the fact that Kyoto's impact upon the climate will not even be measureable in the 21st century and, at best, would only postpone 22nd century warming by five years.

What is the price tag that would be placed upon that utterly useless Kyoto compliance outcome? By some estimates, it is $180 billion per year. Just half that amount would provide adequate sanitation, clean drinking water, health care, nutrition and education for every person on the planet according to UN estimates. How much human suffering and death must be blithely ignored by climate campaigners to advocate squandering this amount of precious resources on such an utterly worthless exercise when glaringly obvious immediate human needs are in direct competition with it?

EU leaders and salivating media effused over the EU's agreement in late 2008 to implement their EU 2020 mandate that obligates signatory countries to derive 20% of their energy needs from renewable sources by the year 2020. European Commission President Manuel Barroso applauded the EU's achievement, proudly claiming it was a model for the rest of the world to follow. He gushed to his fawning media sycophants that "Europe has today passed its credibility test."

And what is the cost for such moral exhibitionism? How credible is Europe now that it needs to incur annual costs of €210 billion for its agreement according to reputable studies? Once EU 2020 is fully implemented and the irreplaceable mountain of resources is squandered, will the agreement eliminate the threat of global warming forever? Actually, it will postpone it by just two years.

Solar energy in Germany soaks up 56% of all energy subsidies but produces only 4% of the country's electricity. Solar subsidies will cost German ratepayers at least €205 billion between 2012 and 2030, a figure that is certainly understated. And what will the planet achieve for that staggering investment? Is the planet saved from impending climate doom? In fact, 22nd century warming will be postponed by just 37 hours. Has Europe passed its credibility test knowing that an incalculable amount of human suffering throughout the world could have been alleviated with a fraction of the amount of irreplaceable capital it will squander on expensive solar panels that will provide no practical climate benefit?

Which side of humanity's most pressing needs will we find ourselves on? Which future will we help create? Will we join the globe-trotting, jet-setting climate campaigners who are busy siphoning countless billions of our resources on useless carbon counting exercises, resources that could lift the world's poorest out of the indescribable misery, suffering and deprivation they face? Will we line up behind climate zealots supporting actions that will condemn millions to an unworthy future characterized by horrible deaths due to disease, cancers, unsafe drinking water, deforestation, and starvation caused or exacerbated by dubious 'green energy' schemes? Will we cede moral authority to barely sentient campus agitators demanding college endowments divest holdings in companies that produce the fuels which dramatically improve lives and livelihoods of the world's poorest, the very fuels those same agitators consume in massive quantities, the kind they rely upon to power their modern way of life?

Or will we help lift humankind out of poverty, disease, deprivation and ignorance. Will we assist the world's most vulnerable to achieve a worthy future of healthy, vibrant, dignified lifestyles filled with opportunity and assisted by a more equitable...

It is difficult to find an area of public policy more plagued by misunderstanding than energy policy. Even worse, every time the subject is raised, we are obligated to get mired in pointless arguments about the weather. This book helps set the record straight. Not convinced? Consider some of these inconvenient truths:

The cost of ‘green energy’ climate remediation is anywhere from 10-to-1,000 times greater than the damage from the climate change it attempts to alleviate.

Germany, the world’s leader in solar energy, will spend more than $280 billion by 2030 on solar subsidies. But all of that investment will only forestall 22nd century global warming by 37 hours.

At their current emissions growth rate, it will take China nine months to replace the entire U.S. emissions cut that Obama wants to achieve over seven years, at a staggering cost in American jobs and lost economic growth.

The U.S. biofuel program imposes a cost on consumers 9,862 times greater than any climate benefit they or their distant progeny will ever derive.

This is not another skeptical global warming polemic but an economic evaluation of how and why green energy will fail. The world has too many pressing needs. For the money Obama squandered on just a single bankrupt crony solar company, the U.S. could have prevented 300,000 childhood malaria deaths in poor countries. A thoroughly researched, heavily documented book by an expert in his field, it will demonstrate in meticulous detail how wasteful and economically inefficient Obama’s ‘green energy’ dead end future will be compared to other worthy alternatives. It’s time to end the hysterical climate cynicism and get on humanity’s side.

Joseph Toomey is a career management consultant specializing in economic analysis, corporate finance and global supply chain strategy. His work as a trusted advisor to some of the world’s most prominent corporate names in the oil & gas, oil field services, electric utility, chemicals manufacturing, natural resources and transportation industries in dozens of countries all over the world affords him a solid perspective in energy policy.