Fifteen Feet from the Pope

Dispatches from a Sabbatical in Rome 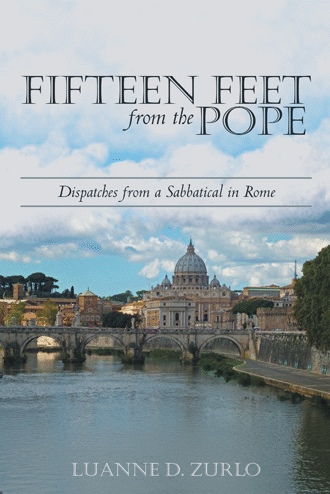 Thankfully, I didn’t read the ‘rules’ before heading over to Piazza San Pietro (St. Peter’s Square) yesterday morning to attend the pope’s Wednesday audience. One is supposed to present a (free) ticket to enter the square but that message didn’t seem to reach the well-muscled security guards who let everyone in, ticket or not. I suspect there must be a special gym near the Vatican with miraculous, muscle-building powers where the St. Peter’s Square security guards work out, as all the ones I noticed have perfect, self-pleasing shapes under their form-fitting uniforms and requisite Ray-Ban’s.

Watching Pope Francis live for the first time was an extraordinary experience. I consider myself pope ‘privileged’, as I had the opportunity to stand very close to now Saint John Paul II, to shake Pope Emeritus Benedict’s hand, when he was Cardinal Ratzinger, and also to attend Mass celebrated by Benedict in Havana, Cuba. Each of these encounters was unforgettable and seeing Pope Francis yesterday was no different. The pope rolled into St. Peter’s at 9:50 am atop his open pope mobile. It took 30 minutes to ride around the square, kissing babies and waving to the ecstatic crowds.

Some observations. Pope Francis smiled authentically the entire 30 minutes, as one can view up-close the proceedings as they are televised on two huge screens at two corners in the square. Smiling non-stop is not easy. The pope truly seemed to enjoy himself and derive great energy from the outpouring of love. He must have kissed at least 75 babies on his loop and, amazingly, only three of them cried. I think this is pretty amazing, as I can only imagine how scary it would be for a baby or toddler to be quickly handed over to a security guy who then foists the baby up to be kissed by a big man in white. I was impressed by the security guy who does most of the baby duty. He clearly has developed an effective baby-foisting technique, right hand under the bottom, as if balancing a basketball right before the shoot, and left hand on the baby’s stomach to balance.

Pope Francis then hopped out of the mobile and energetically scaled the steps leading to the platform from which he spoke. (I have become obsessed with steps because of the 73 I have to climb to my apartment.) This pope clearly does not like to keep to script. The style of his commentary on one of St. Paul’s letters suggests that he wrote it himself. Yet he still looked up from his notes on a number of occasions to add an even more personal, unscripted touch to his address. It was on these occasions when the audience was most enthralled, bursting into cheers. For me, the most powerful moment of his meditation was when, in extolling the beauty and sacredness of the Catholic Church even in the face of all its problems, Pope Francis then said “Men are sinners. Women are sinners.” He then looked up from his paper, towards the cardinals seated at his left and said, “These cardinals are sinners; bishops are sinners; priests are sinners, I am a sinner; you are sinners.” The crowd loved it, especially the cardinal part.

It occurred me that Francis is a pope who appeals to the heart, and people are so hungry for their hearts to be touched at this moment. Pope Benedict -- considered by some to be the, if not one of the, most brilliant popes that ever lived -- was more a pope of the head. Pope Benedict’s first encyclical, Deus Caritas Est (“God is Love”) gives a sense of both Benedict’s heart and head, but his communication style was much more cerebral. Head and heart are both equally critical to a well-formed person, but sometimes one needs to be emphasized over the other, at least it seems to me.

It was during the moments in which Pope Francis looked up and out into the audience that he most effectively touched our hearts. My Italian is rudimentary, but I got much more out of Pope Francis’ remarks in Italian than I did from the American priest who then summarized the remarks in English. The remarks were summarized one-by-one by priests speaking French, German, Arabic, Polish, Spanish and a heavily Carioca-accented Portuguese. The summaries were formulaic with lots of fancy words that create a veil over the raw meaning. The Pope’s language is simple and penetrating.

In early 2013, Luanne Zurlo decided to take an extended break from years of intense, travel-heavy work that had left her exhausted. Three months later during a brief vacation in Rome, Zurlo felt a pull like never before. It became obvious to her that she needed to spend more time in Rome—specifically to study theology at the Angelicum, a Pontifical University. Some six months later, a unique journey began as Zurlo returned to Italy to fulfill her dream.

In her travel journal compiled in the form of dispatches, Zurlo shares a thoughtful, often amusing view of her four-month sabbatical overseas as she immersed herself in the culture of Rome, learned how to climb the seventy-three steps to her apartment without gasping for air, explored Italy, including a search for a family saint, and soaked up an array of experiences.

Fifteen Feet from the Pope shares fascinating commentary and photographs from a former Wall Street analyst’s unforgettable experiences during her Roman sabbatical.

Luanne D. Zurlo is a professor of finance at Catholic University. She formerly worked on Wall Street as a top-ranked, equity analyst and led an education-focused non-profit organization she founded prior to teaching. She has lived, traveled and worked extensively in Latin America and Europe.