The Rise and Survival of Joseph Fouché, Inventor of the Modern Police State 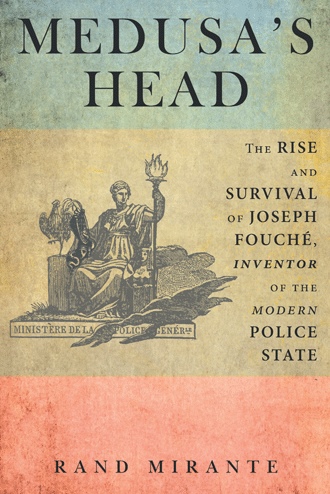 Prologue: Terror in the Rue Nicaise

It was Christmas Eve 1800, in the de-Christianized capital of France. To the rest of the Western world it was the cusp of a new century, but in Paris the Revolutionary calendar had set the date as 3 Nivôse in the Year IX. As night enveloped the city, pedestrians stopped and stared at the elegant state carriage of First Consul Napoleon Bonaparte clattering down the cobbled streets along the right bank of the Seine. Behind his coach trailed an armed escort of plumed, green-jacketed cavalry from the elite guard unit which would later be known as the Chasseurs à Cheval. After them, at a widening interval, came a second state coach carrying Napoleon’s consort, the former Josephine de Beauharnais, and her high-fashion entourage, including Napoleon’s sister Caroline and his stepdaughter Hortense. This small procession had left the Tuileries Palace, the scene of Revolutionary tumult just a few years before, and was making its way to the opera house. There, Napoleon and Josephine were to attend the Paris premiere of Joseph Haydn’s great oratorio based on The Book of Genesis, Die Schöpfung, or The Creation.

Bonaparte was the de facto ruler of France in the Year IX, thanks to a military coup d’état known as the 18th Brumaire (again, a date on the new calendar), which he had somewhat clumsily conducted thirteen months before (in the Year VIII). He was the unifying force who on the one hand had come to embody the French Revolution with its sweeping changes and bloody excesses and, on the other, the strongman who had brought the turmoil and upheaval to an end. Contemplating his grand ambitions to remake the world, Napoleon was perhaps looking forward to mentally transposing Haydn’s musical rendering of the Supreme Being bringing Order out of Chaos onto his own past and future career of creative, cathartic destruction.

The First Consul’s carriage wheeled at considerable speed onto the narrow Rue Nicaise, hurtling past the startled early-evening street traffic and vendors. Napoleon, whose sleep habits were always erratic, began to doze off. Then, Terror on a grand scale made its return to Paris.

A tremendous explosion directed from the side of the street blasted away part of the cavalry escort, devastated buildings the length of a block, and inflicted mayhem on pedestrians. As fires broke out, roofs collapsed, and people screamed in panic, Napoleon’s driver whipped the frightened team of horses ahead and brought the coach out of harm’s way and onto the broader Rue Honoré. The glass in its windows was shattered, flames leaped around it, and debris cascaded overhead, but its illustrious occupant and the two future Marshals of France who were accompanying him, Berthier and Lannes, were unharmed. The same close escape was true of the slower, trailing carriage containing Josephine and her attendants. The timing of the ignition of the massive bomb – later to be referred to as the “Machine Infernale” - had been ever so slightly off, and it had been detonated when the widening space between the two carriages had been aligned opposite it.

A distraught Josephine caught up with her husband on the steps of the opera house. Accompanied by the surviving members of the military escort in their charred pelisses, the couple purposefully strode into their box and looked out upon an audience already permeated by the Ministry of Police’s special agents. The performance had of course been delayed, as both sound and word of the great explosion had preceded the Bonapartes’ arrival. The crowd, reassured that the assassination attempt had not succeeded, rose and wildly cheered the First Consul and his aristocratic Creole wife. As the orchestra launched into Haydn’s tremulous overture depicting Chaos and the creation of the primal light, the guests of honor – the survivors of a very modern act of chaos and terror – thereupon abruptly left their seats and under heavy guard swiftly returned to the Tuileries Palace.

There, a shaken and angry Napoleon summoned his political and military advisors and demanded immediate vengeance. The perpetrators of this abominable act - he was very certain of this – were the surviving ultra-radical, left-wing Jacobins who had heretofore not been consumed by their own Reign of Terror or by the vengeful “Thermidorean reaction” which had followed it, and who had not yet accepted the fact that their Revolution and their Republic had been supplanted by effective one-man rule. A reflexive chorus of agreement echoed from the officers and politicians waiting upon the First Consul.

All save one. A sallow, thin, ascetic-looking figure with penetrating yet opaque eyes stepped forward. His name was Joseph Fouché and he was a policeman, although certainly not an ordinary one. If he looked somewhat like a priest, it was because he had at one time been slated to become a man of the cloth, leaving the Congregation of Oratorians at the altar, as it were. That was before he turned against his King and against the clerics who had taught him, and against Christianity and against the enemies of the Revolution with a brutality that shocked even the Jacobins who had set him loose on the rebellious city of Lyon in 1793. In that terrible year, Fouché had become one of the most feared men in France. He would be greatly feared again, the next time with a European stage.

Going against the tide, Fouché firmly stated that he believed that the Rue Nicaise assassins were not creatures of the left as Napoleon had charged. Rather, he opined that they were monarchist reactionaries known as “Chouans” (after the owl call they used to signal each other when lying in ambush). These royalist émigrés and their Catholic peasant followers were concentrated in the departments of the Atlantic coast of France, north of the Loire River. They were funded by Prime Minister William Pitt’s spy service to further Britain’s own ends. Through insurrections and guerilla warfare, the leaders of the Chouans sought to recover the rights and privileges of their class from the Corsican usurper who had taken advantage of a decade of destructive radicalism to seize power, power which the royalists and their followers believed was rightfully theirs.

On hearing the conflicting opinion from his Minister of Police, Bonaparte was derisive and dismissive. He insultingly accused Fouché of seeing the world inflexibly, through his own Jacobin-tinted glasses. This to Joseph Fouché, the man who after being an avenging agent of the Revolutionary Terror, had helped to bring down the feared Robespierre himself. This to Fouché, who had personally locked up the Jacobin Club in Paris, scattered its membership, and shut down the radical presses in the service of the very Directory which he had subsequently permitted General Bonaparte to overthrow. This to Fouché! The upstart Napoleon, who was to become Emperor of the French and the ruler of all Europe, would learn to his lasting regret that his renegade policeman-advisor had no preconceived affiliations or loyalties, except perhaps to his own perversely and flexibly evolving world view, in which it was his consistent aim to be at the center of a web of intrigue, surveillance, and deception. To achieve his overarching objective of clandestine control of the French nation, Fouché would betray any cause, would abandon any individual without hesitation, and would do so before the person betrayed knew of it – if indeed he or she ever did.

Minister of Police Joseph Fouché was universally distrusted, feared, and hated in his time, but was nevertheless considered indispensable. In Medusa’s Head, Rand Mirante recounts the chameleonic and astonishing career of Napoleon’s security chief, who created the modern police state and wielded immense power that threatened the other main organs of government. Fouché was one of the most important, fascinating, and controversial figures of the French Revolution, the First Empire, and the Bourbon Restoration, and this biography captures and unravels the highlights of Fouché’s life, including his infamous roles as:

The grim and remorseless “Butcher of Lyon”

Mastermind of the conspiracy that sent Robespierre to the guillotine

The head of Napoleon’s police – privy to everyone’s secrets, shaping the media, deploying 10,000 informants in Paris alone, and securing funding from the Empire’s casinos and brothels

Cunning enabler of Napoleon’s 1799 coup, and subsequent repeated betrayer of the Emperor

Acting president after Waterloo and traitor to France

Louis XVIII’s Minister of Police, in spite of his responsibility for the death of the King’s brother

Rand Mirante is a graduate of Princeton University and Harvard Law School; after spending most of his legal career with McGraw-Hill, he has worked in Princeton’s development office. For a number of years he taught a course titled Treason: from Henry V to John Walker Lindh in the University’s Writing Program, which helped spark his interest in the antihero Fouché. He also has been a featured speaker on military history and diplomacy on alumni trips abroad.