An Egungun Controls A Lot Of Spirits 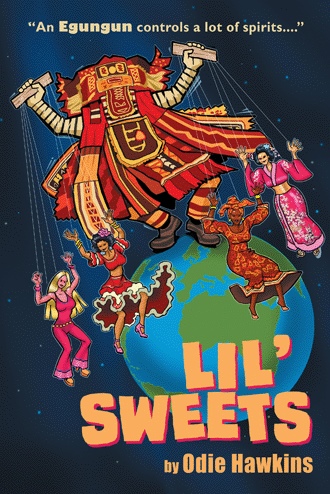 “Well, here I am, “Lil Sweets,” the son of Mr. Sweets” . . . . . out of Justine LeBeau-Wright, a fast stepper from down yonder in deepest Louisiana. The great-grandson of Duke Mansion, grandson of “Sweet Peter Deeder The First”, all internationally known Master Pimps. That’s correct, Master Pimps, in the ol’ fashioned sense of the word, with no attachments. Now, I have some idea of what automatically pops up in a lot of square heads when they hear the word “pimp”. I have to sympathize with some of them because the word places them in a down spin, like calling a conscious African-American a “nigger”. The word “pimp”, like the insult-word “nigger”, have a lot of baggage on it. Now you can just imagine how loaded the gun is when you say “nigger-pimp”. But I’m not going to go there in this discussion of pimp bloodlines, my pimp DNA, if you want get scientific about it. According to the family legend, starting ‘way back, when my first pimping ancestors were whipped off the slave ship, pimping was in effect. And it was done with deliberate malice aforethought.

One of the reasons I’m saying all this is because I’ve gotten the impression from reading lots of books by African-American and Euro-Americans, that the enslaved Africans who were whipped onto the port-docks of New York, Vera Cruz, Port Au Prince, Savannah, Havana, Bahia, wherever, were simply pawns in the game. It was like they were simply whipped on board the ships and whipped off the ships, without a sensible notion working anywhere in their fertile brains. Even before my folks started encouraging me to disregard the Euro-historical accounts of our history, I knew that there were other levels to explore. For those who have read my Daddy’s story, “Mr. Sweets”, some of what I’m saying will be redundant, but I feel compelled to spell a lil bit of this background out before I get into how I became “Lil Sweets”, one of the first robo-hoe pimps on the planet. “Sweet Peter Deeder the First”, my grandfather, laid the game out in front of my Daddy, “Mr. Sweets,” made him understand that he was from a pimping dynasty. The way Daddy explained it to me was like, “‘Listen up, Sweets . . . we were jerked off the boat and started pimpin immediately. I’ve heard rumors all my life about one of our ancestors snatchin’ up a page from a newspaper and teachin’ himself how to read, and the next thing I heard is that he . . . started takin’ money from the ol’ slave master’s wife. That’s cold-blooded pimpin’ at it’s best. Naturally I can’t give you any one hundred per cent validations on any of this stuff, but I have to believe that there’s got to be a lil’ fire up in there whenever you can find that much smoke, you know what I’m sayin’?’ ”

This was a world that had no place on my reality screen until I was ten years old, the year that Katrina blasted New Orleans to bits. Up until I was ten, life in the Big Easy was just that for me, easy. I might even say that I was well on my way to becoming a nerd, a computer geek. I have to give the man who was raising me, the man I thought was my biological father, credit for introducing me to the computer, to the cybernetic/robotic world. Melvin Wright, my “Dad” was almost a complete geek, a rare bird in our Ninth Ward neighborhood at that time. He made computers, fixed computers, sold computers and read everything he could get his hands on about computers, cybernetics, robotics. Early on, he was making a pretty decent living for me and Momma --- B.K., Before Katrina, I think, for the rest of my natural life, I’ll always have to divide my life into two halves – first half, before Katrina and after Katrina. Dad was on a trip up north, in New York to check out an exhibit of the latest robotic/computer technology when Katrina hit. I can remember the frantic calls that we exchanged just minutes before the world changed shape. I thought the world was going to come to an end, that’s the vibe I felt. We suddenly went from living in a nice house in the Ninth Ward, to being a couple of desperate animals clinging to the chimney on our rooftop, trying not to drown. For those who can remember the images of people isolated on their rooftops, holding onto stray pieces of lumber, the people living through the madness that happened in the Astrodome, to the bodies bloating and floating around, Katrina was like a catharsis.

I think that catharsis thing is what made my Momma open up to me in a way she had never done before. Maybe Momma wanted to leave this life with a clear conscience or something, who can say? But there we were, in the middle of the night, thirsty, hungry, clinging to this chimney, surrounded by mile of dirty water when she started telling me the story of how she first met “Mr. Sweets,” my Daddy. I thought she was hallucinating at first. “Peter, listen to me close ‘cause I may not be able to repeat this again. Melvin Wright, the man you call your Dad is not your real father.” I have to admit, that information didn’t exactly cause me to loosen my grip on the chimney. “Your real father, your Daddy is a man named ‘Mr. Sweets’. His real name is Peter Mansion, but they’ve always called him “‘Mr. Sweets’” when he got into the game. Or sometimes “‘Sweet Peter Deeder II’” His father was “‘Sweet Peter Deeder I’”.” Please keep in mind that the United States of America had basically abandoned us, ‘specially the drowning Black people in the Ninth Ward, and here is my mother spooling out some kind of genealogical chart. And talking about some game. What kind of game? And so what? Maybe she missed my skeptically-what-the-hell-expression in the dark, or maybe she was simply determined to tell her story, no matter what. “I was sixteen, babysittin’ this lil’ eight year old boy, the man who eventually became your Daddy” . . . .

Whoaaa! I have to admit I perked up on that one, dirty water be damned. But I didn’t loosen my grip of the chimney. “I was sixteen and he was eight, but that didn’t stop him from seducin’ me.” A light beamed in the distance, was somebody coming to rescue us? An eight year old seducing a sixteen year old? I didn’t see anything incredible about that. I felt pretty sure that a couple of my teenaged girlfriends were out there, swimming around, looking for me. But that was my story.

“… Hawkins … delivers a novel that mixes the streetwise lingo of vintage pimp fiction together with scathing satirical commentary about the spread of global capitalism, the Hurricane Katrina disaster, and the AIDS crisis in West Africa. A classic worthy of the “Sweets” series.” —Dr. Justin Gifford, Professor of English Literature, University of Nevada, Reno

Peter Wright is clinging to a chimney surrounded by dirty water after Hurricane Katrina hits New Orleans when he first learns that the man he calls his father is not his real daddy. As his mother relays his shocking biological story, Peter discovers that his father is Sweet Peter Deeder II, a master pimp with a well-known reputation.

Eventually rescued and sworn to secrecy by his mother, Peter grows into a street-smart fourteen-year-old who has an overwhelming desire to get to know his biological father. After his mother quietly arranges a month-long visit with his father, Peter heads to Chicago where he begins unveiling his biological history. As Sweet Peter Deeder II introduces Peter to fine cognac, expensive dinners, and his luxurious condo, Peter is provided a glimpse into the lavish lifestyle of a big-time pimp. Now known as Lil’ Sweets, Peter begins a journey through the world of pimping that leads him from Chicago to West Africa to Spain and back again as he explores his options and contemplates his future.

In this multi-layered urban tale, a young African American on a quest for the truth must decide whether to embrace his unusual destiny or return to his old life.

Odie Hawkins is an alumnus of the Watts Writers’ Workshop and author of twenty-eight novels. He has written several teleplays and also for the television show, Sanford and Son. Odie currently resides in Long Beach California. This is the final book in his Sweets trilogy.