In Search of Ellen Marie 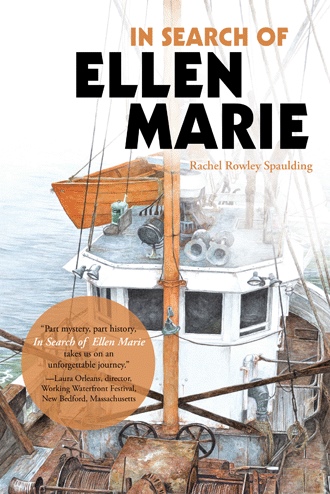 In the few minutes I had before needing to leave for work, I dialed 411 for a number for Cape Oceanic Corporation. That was the Ellen Marie owner that National Marine Fisheries employee, Ted Hawes, had told me about. It was worth a try even though the year built and the vessel length of Ellen Marie in the NMF files were slightly different from those I thought were my Ellen Marie’s. Directory assistance gave me a number.
The recorded message on the answering machine identified Cape Coastal Builders. I assumed that directory assistance had made a mistake. Annoyed, I re-dialed 411, enunciated Cape Oceanic Corporation as clearly as I could and even spelled C-A-P-E, which of course confused the computer and switched me to an actual operator. Again I requested the telephone number for Cape Oceanic Corporation. I was given the same number. This time when the Cape Coastal Builders answering machine connected, I explained how I got the number and said, “I’m calling because I bought a painting of a fishing dragger named Ellen Marie and I have this overwhelming desire to learn what happened to her. If someone there can help me, I’d appreciate a call.” I left my phone number.
My negative thinking kicked in. What was the likelihood that somebody at a construction office would have information about Ellen Marie? If someone there knew about Ellen Marie, why would they spend their time on something that was important to me? I left the results to a Higher Power, and headed to work. Mid-day, I answered the phone never thinking that the call might be about Ellen Marie, but the caller referenced the message I had left that morning. The first thing I wanted to do was make sure we were talking about the same Ellen Marie. “Was she owned by Rudolph Matland?” I asked. She was. “And your name again, is what?”
“Jim Spalt.”

Mr. Spalt had purchased Ellen Marie in 1980. “She was nice,” he said, “but she didn’t have enough power to compete.” He explained that he replaced her original 365 horse power engine with a 510 horse power engine from another Gamage boat, the Explorer. Mr. Spalt said that the previous owner had converted her to scalloping. When he said something about adding a boom to her, I cringed, because it reminded me of the Candy B II’s top heavy condition after a boom was added – the possible cause of her loss. I hoped Ellen Marie hadn’t suffered a similar fate.
“She was upgraded but very sound,” he continued. “I made a lot of money with her, so I was able to buy larger steel boats.”
“What did you do with her?” I asked.

“That’s a long story,” he said with a sigh. But he didn’t stop there. He educated me about rules and regulations, a scallop size law, regulations about how much shellfish you can take, violation notices, records inspections, litigation and his experience with all of it that led to a forced choice of either liquidation or seizure. His was the first violation notice that the government issued in its efforts to enforce the new regulations. He was all done, wiped out, so Ellen Marie had to be sold.
I told Mr. Spalt about my first exposure to the regulations when I was in South Bristol, and I told him about my being drawn to the orange mast and the orange life boat in The Pilot House painting.
“It was definitely orange,” he affirmed. “I took it off her before I sold her. I sold her to a man named Bronko in Rhode Island.”
“Bronko?”

“That’s what they called him. I don’t remember his last name. He fished out of New Bedford and then Newport, or maybe New Jersey.

When author Rachel Rowley Spaulding first saw a copy of the painting of a fishing boat’s wheelhouse, she passed. Later, when presented with the chance to acquire the original painting, she knew she had to have it. Inspired by the rich colors (and the lure of a great story), she began a quest to find the Ellen Marie, the boat in the painting.
This story is really about a boat’s life, as well as the lives of people and their power to affect others. A fisherman in South Bristol, Maine, put his work on hold to chat and share an important clue in Spaulding’s search. Ellen Marie’s captain of the 1960s and ‘70s in New Bedford, Massachusetts challenged her stereotypical thinking about fishermen and took her on an imaginary trip to Georges Bank. Another captain generously shared his time, even inviting her on board a working vessel to clarify her understanding of the fishing process.
Ultimately, In Search of Ellen Marie is about being human and experiencing denial when life seems unbelievable. Spaulding learns compassion as she witnesses the grief of loved ones left behind when fishermen lose their lives at sea. It’s about the author’s awe-inspiring realization that she is now a part of a historic era that is endangered—a time of classic wood commercial fishing boats manned by a unique breed of courageous fishermen. It’s the story of connections, passions, and great pride.

Rachel Rowley Spaulding holds a business degree from Boston University and has worked primarily in the financial field. She gained her writing education from UMass Dartmouth. A native of Cape Cod, Rachel now lives close to New Bedford, the historic fishing port she has come to love.