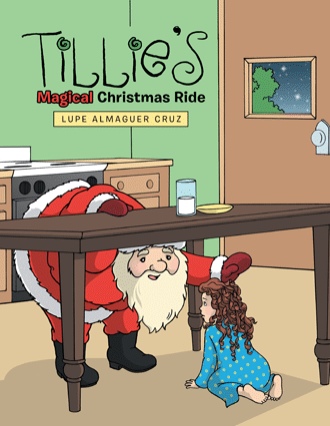 At a distance, Tillie heard a rhythmic moving sound. Shing! Shing! Shing! Shing! “What’s that noise,” Tillie wondered. “Could it be…is i possible…could it be what I think it is?” From the dark sky, Tillie watched as a huge silver light descended. She could now see a sleigh with nine reindeer prancing through the air. In front of the sleigh a robust pink cheeked Santa, uttered, “HO! HO! HO! HO!” Shing! Shing! Shing! The sound of Santa’s sleigh continued to jingle as it the sleigh flew to the earth. “Santa’s here!” Tillie cried, her heart light enough to fill a thousand balloons. She ran to the door before remembering that when Santa visited, all children must be asleep. Tillie had just enough time to scurry like a little mouse under the kitchen table. Slowly, the kitchen’s doorknob turned and in walked a pair of black boots. “Well, what have we here? Animal crackers,” said a jolly voice that could only be Santa’s. “Crunch, crunch, crunch,” Tillie heard. Then “gulp, gulp, gulp.” Santa was eating the animal crackers when the worst that could happen, happened. The dust under kitchen’s table began to tickle her nose. It tickled and tickled. “Oh, no! Not now!” Tillie thought. But she was unable to bear the tickling and let out a loud, “Ah-ah-achoo!” When Santa heard the sneeze he looked around to see where it came from. “Hmm, who’s under the table?” he asked. “Is it a little mouse?” In a faint voice, Tillie answered. “I’m not a mouse Santa. It’s me Tillie. I’m a little girl.” Santa bent down to look at Tillie under the table. She could see disappointment in his merry eyes. “Tillie, you didn’t go to sleep as you were told. You know I only visit children when they’re asleep. Now, because you’re not in bed sleeping I must leave.” The balloon in her heart popped. Quickly, Tillie scrambled out from under the table, and stood in front of the chubby, plump Santa. “Santa, I promise I tried to fall asleep, but I couldn’t.” “Tillie, I have many, many toys to deliver, but I’ll come back if you’re asleep. If not, next Christmas when I visit I hope to find you asleep. Now I must leave.” He turned walked out the door and in the dark he disappeared. “Wait, Santa, please come back, I need to tell you something,” she cried, running after him.

It’s the night before Christmas and, as Tillie sits by the window, she can’t help but think about what a wonderful Christmas she’ll have this year. Little does she know that her night—and her life—are about to be changed forever. As Tillie stares dreamily through her window, a sudden flash of light catches her attention and she realizes the light was caused by a bird streaking through the sky. Coming to her, Tillie discovers she can talk with the bird. In a rush to get closer to the bird, Tillie goes outside clutching her letter to Santa. Before she knows it, the bird snatches her letter and flies away. It isn’t long before the bird returns, however. And, when he does, he brings friends.

In the middle of the night, long after Tillie has fallen asleep, the stars descend toward Tillie’s house. As they get closer, the stars become glittering angels, and beyond them is someone very special to Tillie. Behind the angels is Santa, and he needs her help.

Tillie’s Magical Christmas Ride is an enchanted tale about one girl’s magical Christmas Eve as Santa’s Little Helper. Infused with both the magic of myth and the glory of Jesus’s birth, Tillie’s adventure inspires not only children’s, but, also, adults’ sense of adventure and reminds us of the true meaning of Christmas.

Lupe Almaguer Cruz dreamed she met Santa at the age of seven. This special mystical dream lived within her for many years. Years later, while writing her life story, she thought of writing her childhood dream. She currently lives in San Diego, California.