by Homer A. Taylor 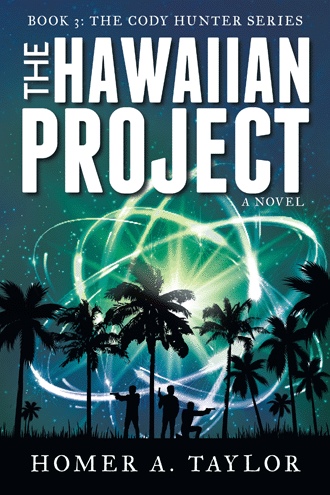 They waited until midnight in their small boat. All three fit snug in wet suits with plenty of oxygen. Bob looked at Cody. “Are you sure you can handle this underwater equipment and stay up with us and still remain armed and sober without drowning or slowing us down?”

Cody sighed and said, “I have seen a few movies, guys. No one on the screen had a problem with this underwater breathing apparatus stuff. If they can do it, I can do it. The only problem is that I never learned to swim.”

Leo said, “We better have a trial run. Cody, don’t go deeper than two or three feet. We’ll have you floating in salt water in no time. Although it actually depends on how long you’ve been dead.”

Cody asked, “Is there a way we can warm the water up a bit? It feels too cold to be dipping my bare feet into it!”

Bob touched Cody’s shoulder. “This is the Pacific. Stop trying to weasel your way out of this. You’re going, so knock off the Leo jokes.”

An hour later they changed their minds and decided on another plan. The yacht was well lit while sitting far into the darkness. The boats maneuvered close around the yacht about a mile off shore.

They moved back to the dock and turned their boat back to its legal owner. Then they swam a mile before closing in on the boats surrounding the yacht.

Cody fell behind several times because he wasn’t a fast swimmer. He struggled to keep up by swimming under water with the oxygen fitting questionably over his face. He came up often to keep his bearings. He thought he bumped into a ferocious white shark several times. He carried his weapons well and checked his oxygen once he swam in close to the others. He came up practically under the stern of the first boat. He was about to pull himself up when Leo tapped his shoulder and signaled for him to wait. Cody nodded.

Leo surfaced a few feet behind the boat and shot above Cody and Bob’s heads. He used a silencer but the noise in the silence alerted the two closest boats. They dove and swam toward the other boats. Lights went on everywhere and the big yacht came to life immediately. It slowly moved forward after dropping the anchor and chain.

Cody surfaced in a dark spot and shot three of the four men on one boat. He dived as another boat turned its light on him. Leo surfaced behind that boat and shot the driver. He climbed aboard shooting and turned the boat straight back for shore then dove into the water. The boat crews shot blindly into the water with automatic weapons.

Two boats put their lights on the boat that appeared to be escaping and opened up their engines to catch it, shooting as they left. Others came around from the opposite side of the large yacht. Cody stayed under as long as possible. Bob caught a hand hold on one of the chasing boats and it jerked him from the water. He straightened and shot three of the men on board and let go. He went under by purposely using the momentum gathered from the boat.

Cody swam deep and turned back to spot boats speeding in circles overhead. He caught a fast glimpse of Bob as he launched himself toward the surface like a dolphin to jump clear of the water and the propeller. Leo had abandoned the boat and positioned himself exactly right and came half out of the water to shoot the remaining members of a crew that Bob had attacked. The boat headed straight ahead and almost crashed into the moving yacht.

Cody dropped his oxygen and timed another boat as he swam fast for the surface, emulating Leo as best as possible. This time he finished all four of the crewmen. He gulped a lungful of air and headed back down slightly after a second above the surface. Underneath, he dropped the clip from his side arm and slammed another full ten in its place. He heard hundreds of bullets zip through the water as the boats steadily attempted to shoot everywhere around them.

Bob climbed aboard after eliminating the crew of another boat. He slowed and leaned over the side to slap the water with the flat of his hand three times. Cody heard the message and swam for the back of the boat. On board Bob was almost in a panic while he yelled that Leo had disappeared.

Leo could not be found with the lights. Bob headed toward two boats that came around the back of the yacht. Bob lifted the light and temporarily blinded one crew on a boat while Cody fired his rifle.  As they passed between the boats, one crew member from the boat on the opposite side managed to fire one blast at them while Cody placed one round in each of their four chests. Bob, in the meantime, killed the other boat. The yacht moved swiftly at least 100 yards distant.

“Why?” Cody asked, thinking the order a mere waste of words.

“Why not?” Leo yelled as he swam for them. “Are we finished with the escorts?”

“We are!” Bob answered in lower decibels.

Leo slapped the side of the boat. Cody helped him on board.

Leo sat and panted a little while. “Whew! I could’ve used a little help out here, guys. Where were you?”

Cody shrugged. “I was trying to find a flotation device during all the shooting and Bob raced back to the docks for another case of beer. Did you really get in on any of the action, Leo?”

Bob looked in Leo’s direction without being able to see his face in the darkness. “Would you concur with that suggestion, Leo?”

“No. I concur that we sit idle in this boat until daylight or until Cody comes up with some other brilliant suggestion.”

Bob had already opened the throttle up on their boat and turned it toward the yacht. Cody’s face turned red in the dark.

It is 1982 when cowboy turned federal agent Cody Hunter is once again thrust into the danger zones to execute justice. Along with his two partners, Bob and Leo, Cody is assigned to eliminate a major narcotics smuggler who is rapidly becoming the world’s wealthiest and most dangerous man. Driven by his passion for his work, Cody leaves his new love, Nancy, and her son, Charlie, behind, and heads for Los Angeles.

With the seemingly willing daughter of a Nevada senator in his possession, kingpin smuggler James Frank Caprioza is living on a yacht just offshore, surrounded by armed boats. After their attempt to rescue the girl fails, Cody, Bob, and Leo continue their pursuit to Hawaii where they uncover a large sinsemilla field, unaware that Caprioza has partnered with the senator to secretly develop an ultimate weapon with not only great killing potential, but also worth billions to China and Russia. Now there is an even bigger problem: the senator is dead, his daughter is still missing, and Caprioza is willing to do anything in his power to eliminate his three pursuers.

In this continuing action adventure tale, a federal agent and his partners risk everything—including their lives—to capture a determined drug smuggler before he carries out an evil plan.

has been a working cowboy, a Grand Canyon mule guide, a national park ranger, and a narcotics agent for the United States Customs Service. He is a freelance writer who has been published in several magazines, and is the author f two novels in addition to The Cody Hunter Series.