A Bike Across America 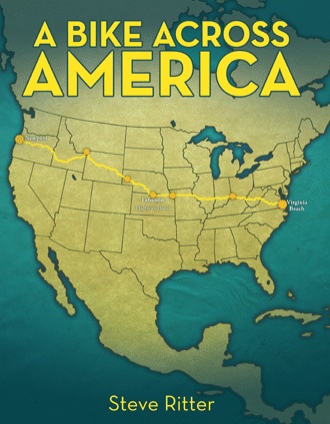 As a midlife challenge, author Steve Ritter decided to leave the comforts of home and the daily routine of his office and set out on an epic journey to bicycle across the United States. Ritter wanted to rediscover his rural roots, explore nature, immerse himself in the rich history of his country, and find out if he still had the endurance of his youth. He wanted to see what other people did every day as he sat at his desk.

In A Bike across America, he narrates the story of his thirty-five day, 3,461-mile journey that began April 27, 2013, in Virginia Beach, Virginia, and ended in Newport, Oregon. This travelogue shares Ritter’s thoughts, expectations, and surprises––battling the weather, equipment failures, and his doubts and fears, and being assisted by kind-hearted strangers. With some history and geography included, Ritter tells how this cross-country ride changed his life.

Frank and honest, A Bike across America recounts Ritter’s ultimate road trip—one that taught this fifty-year-old empty nester that through perseverance and determination, it could be done.

Steve Ritter grew up in the heart of the Blue Ridge Mountains of North Carolina. With an interest in science and writing, he earned a doctorate in chemistry and an undergraduate degree in English and pursued a career as a science writer and editor. Ritter now lives in Washington, D.C.