Race for the Species 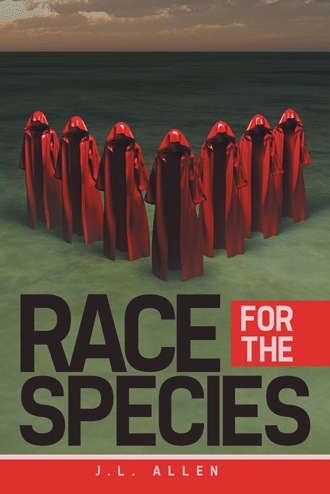 The Rusty Anchor Saloon There wasn’t another spot like this around for miles, and every soldier, sailor and steamfitter knew it. Pipefitters, journeymen and gypsy cab drivers, huddled together around pool tables, bar stools and bottles of bourbon. Even though the winds were blisteringly cold coming off of the water, the port was bustling with business as usual. The Wurlitzer churned out yet another Jimmy Buffet tune as the sounds of pool balls and drunken humor reverberated through the lone standing block building, its outside now flooded by blaring yellow crime lights that scoured the surrounding parking lot, on the far edge of a busy sea port. To say that no one noticed the six beautiful women walk in would be like saying no one noticed the big pink elephant in the bouncy house. Within a few minutes of each of them walking in, they made a love connection, by day break they were each beginning a five and a half month gestation period. Within a six month period, the six females gave birth to six new lives each, six new lives that were fully capable Within six months of mating and within a year of not only creating life but savagely taking it as well.. Each of the new species now carried DNA and traits of both, man and what would soon become the new. Each appeared totally normal, once you got past the fact that they went from infancy to young adult in about eight months, could breathe under water, sustain, unprotected from the elements at any temperature, see in total darkness, maneuver at a cruising speed of close to sixty miles an hour and was in no way governed by the laws of gravity. Chapter I The Arrival Richard was a typical American truck driver, working the typical long day for short pay as they say. The Rusty Anchor had been a Friday evening watering hole for Rich and a bunch of the guys at UPS for years. They would all meet there after the end of second shift, after cashing their checks to swap stories about this week’s weird delivery or pick up. Richard had not said one word about the incident that had put him into a cardiac arrhythmia and had no intentions of doing so. As the others gabbed and gulped, Rich tried unceasingly, yet unsuccessfully, to drown out memories that had caused his original collapse. They had asked him on a couple of occasions what had caused his collapse and he’d simply responded, “I don’t know, one second I was waiting on the elevator, the next I was on a gurney in an ambulance”. The seven of them together pretty much covered all seven quadrants of the city that encircled the port. Adam, the oldest, whose name fit so well they all said, because he was the oldest and had been with the company since the beginning. No one ever made clear whether they meant the beginning of time or the beginning of the company. Carl, X-military, gun enthusiast, that could turn any conversation at all into a reason to invite everyone out to the rifle range to invoke their fifth amendment rights and all that. Eliot, who’d started as a package handler a few years back and had been denied a route so many times that he’d actually called in sick on the last day the routes were assigned, being sure that once again he’d be passed up yet again for someone with more tenure. He was right, for this time, once again his name went uncalled on the new driver roster. But less than a week later an unexpected accident on a fish creek outside of town, provided him the opportunity he’d sought for so long, the opportunity to drive all over town in one of the big brown trucks, showing off his legs to secretaries all around the tri-state area. Giovanni, or Gio the Greek, apply nicknamed for his dark olive complexion and his long jet black pony tail that had so often become the center piece of conversation both with the ladies and the bosses that thought all drivers should be trimmed to no less than an inch above the collar. In the end it always came down to a vote and when the votes were counted Gio’s position behind the wheel was always secure, so was his name’s position at the top of the bar tab after he’d bribed everyone to vote to let him keep his hair and he’d pick up the drink tab on Friday, providing he still had his driving position. Being that he did, the guys now ordered top shelf, even offering to grab up Gio’s drinks for him as well. There was Skip, so named for his uncanny ability to always manage to somehow accidently skip a stop, somewhere near the farthest point in his route. Theo, the hustler also known as the brown clown of the downtown rebound. Next there was Sye, who could not have come off more Jewish had he dressed in black suits, worn a little black beanie full time, and grown a long white beard and sideburns. Last of all there was Julius, divorced twice and now married to the shipping business for the sake of monthly child support payments. Julius was a quiet guy, who would rather get paid than get laid, the crew often joked. His muscular build was proof of his commitment to hard work, but if you were to ask Julius, he’d be the first to tell you that the only thing getting hard has ever gotten him was deeper in debt to the department of children and family services. The seven had met in the parking lot of The Rusty Anchor every other Friday for the past two years. For seven years they had all walked in together and for seven years they all left together.

The Rusty Anchor is a well-known gathering spot for blue collar workers who huddle around pool tables, bar stools, and bottles of bourbon. Rich Ruskin is a truck driver who loves knocking back a few cold ones at the Rusty Anchor with the six other guys who run package routes around the city. But as he enters the bar on what he thinks will be a typical Friday night, Rich has no idea that events surrounding this evening will not only change his view of the world, but the world itself. After six attractive women enter the Rusty Anchor, Rich heads to the restroom. When he returns, his friends have disappeared into thin air—along with the beautiful women. What he does not know is that around the world, over two million other men have also vanished. As Rich becomes a suspect in his friends’ disappearances, the world erupts into chaos as a new species is born. Now Rich is expected to deliver the world from destruction and his own kind from extinction. But one obstacle stands in his way: a determined enemy who feels they have as much right to the planet as he does. In this gripping science fiction story, a delivery man whose route suddenly takes him between the Earth’s surface and those living beneath must pull out all the stops to save the world—and man—from a resolute invader.

J.L. Allen was born in Georgia and raised in Florida. He is a veteran of the United States Navy and has been writing poetry for over twenty years. J.L. currently resides in Harrisburg, Pennsylvania, where he enjoys cooking, singing, and spending time with his family.