If You Leave this Farm

The Dream Is Destroyed 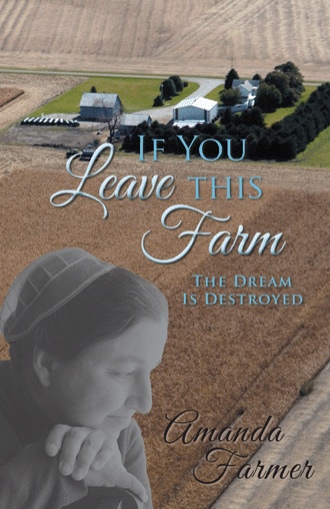 It is April 1973, but it is dark outside as I slide my feet out of bed at four o’clock in the morning and dress hurriedly in the brightly lit bathroom. Daddy is already out at the barn and expecting his children to show up to help with milking, feeding the growing cattle, and giving milk replacer to the younger calves. I awaken Joseph, my brother who is fourteen and just a year younger than me, by banging on the bathroom wall that adjoins his bedroom. I hear a stirring, so I make my way downstairs and prepare for my mad dash through the dark to the barn to avoid the monsters that might be waiting for me. Paul, at seventeen and two years older than me, is allowed to continue sleeping and will appear later.

Our farm of one hundred twenty five acres is located in the rolling hills of southern Pennsylvania. A narrow blacktop road twists through the farmstead, its path wandering within twenty feet of the buildings. The white clapboard house sits several hundred feet down the road from the typical red bank barn. The upper part of the barn houses tons of hay and straw placed there through hours of toiling together during the hot summer months. The lower part is the milking area which contains twenty eight stanchions for holding the cows securely in place while they are milked. We are modern farmers in that the milk goes directly from the milking machine into a pipeline above the stanchions. The milk shoots through the glass tube to the holding jar in the milk house, is pumped through a filter, and then is dumped directly into the bulk milk tank. We milk around one hundred twenty five cows twice each day. When the cows are not being milked, they are housed in a large free-stall barn and fed silage twice a day using a squirming auger that crawls down the middle of the feed bunk. The silage cascades down the chute from the two towering concrete silos that grace the landscape.

With the milking chores done, I make a repeat dash back to the house around six forty five. Mama works nights as a nurse at the hospital and will not arrive home until after eight thirty leaving no one to greet me at the door. The house seems cold and forbidding in these dark silent early hours of morning. My first action is to throw on several lights. Nobody seems to be lurking in any rooms, so I make an effort to slow down my frantic breathing. The bus is due at 7:15 am. I must hurry to wash up and change clothes. Paul and Joseph are soon back in the house as well, and Joseph makes a kettle of instant oatmeal for our breakfast. Oatmeal almost makes me gag, but there is no time to find something else to eat. I take a small portion and slather it with brown sugar hoping to slide it past my palate as quickly as possible. There is always shoofly-pie, made by Mama each week for breakfast dessert, and that is what I go for as sustenance for the day. Joseph and I check frequently out the western house window for the flashing red lights of the school bus at the neighbor’s as we gulp our food. Lunch boxes and coats lie by the door. I just finish shoving my second arm into a coat sleeve as the bus screeches to a halt outside our door. My stomach is curled in knots from this frantic rush each morning. But now it is time for my nap. We are the second ones on the school bus. I settle into a seat with Joseph for our thirty five minute ride to Friendship High School located in rural south central Pennsylvania. This long ride gives me the perfect opportunity to make up a few of those missed winks of sleep. It has been impressed on us that work is more important than sleep. And it is certainly much more important than school. Therefore, this year—my tenth—will be my last year in school. Paul was removed from school on a work permit three years earlier and Joseph and I will leave next year to stay home and help on the farm too. I am being allowed to stay in school a year longer than the boys because I am smart or maybe because I am a girl. I am not really sure which. Mama has a bachelor’s degree in nursing, but Daddy does not believe education is important. After all, he only has an eighth grade education and he did “just fine.” And apparently Mama doesn’t think it necessary or prudent to oppose his wishes.

In some ways, I hate school. This lack of sleep and the stress of not having time to properly do the schoolwork weigh on me. But school does provide a means for me to explore a world that is quite different from my home life. There are the usual classes as in any tenth-grade public school. There is English, German, typing, geometry, social studies, gym class and study hall. I learn easily and don’t need to put a lot of brain power into mastering the material. This ability saves me scholastically since I am always exhausted from the early morning hours spent in the barn. My eyelids flutter as each successive teacher drones on; my head nods and finally sinks onto my desk. If there was a category in the Guiness Book of World Records for number of classes slept through, I would receive it. Surprisingly, I receive little reprimand from my teachers probably because I ace most of their tests and make straight As except in gym class.

Oh yes, gym class is my bane. But how can I make an A in gym when I am the only one wearing a dress while trying to climb a rope or perform cartwheels? We are Mennonites so every day I wear a skirt and blouse as my basic attire. A single braid of uncut hair snakes down my back beyond my waist. It is capped by a small mesh “covering” on my head.

Mennonites are distinguishable from other Christian denominations primarily by several beliefs that are distinct. They were, historically, called Anabaptists because of their rejection of infant baptism and the practice of believer’s baptism. The Mennonite Christian is to be separate from the world in all practices. This translates into a strict belief in the separation of church and state and the practice of non-resistance. No church member may serve in the military, participate in a lawsuit, vote, or hold public office. Dressing differently from the world is also stressed. For women, this means they are not to “use make-up, cut their hair, and wear slacks, shorts, or fashionable head dress, short sleeves, low necklines, dresses not reaching well below the knees, or clothes that expose the form of the body in an immodest way. The hair is to be covered with a veil of sufficient size to adequately cover the head.” (Statement of Christian Doctrine and Rules and Discipline, Lancaster Conference of the Mennonite Church, July 17, 1968)

In spite of feeling like a misfit at school, I do have a small select group of “worldly” friends. Cory, Laura, and I hang out together in study hall and they are my confidants. However, I am not allowed to visit their homes or go places with them because they might influence me towards those 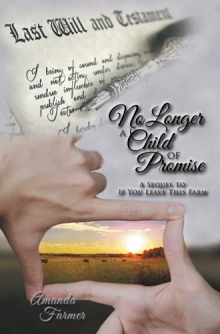 No Longer a Child of Promise
Amanda Farmer
$17.99

As a teenage Mennonite girl, Amanda lives with her close-knit family in south central Pennsylvania. Life revolves around hard work, faith, and commitment to the family. She doesn’t question the daily routine; it’s the only life she’s known. Her father talks about buying a farm out west with a lot of land in one block. Not only will the family farm there together, but the parents hope to begin a new Mennonite community. To a fifteen-year-old girl, this move begins as an exciting adventure.

In If You leave this Farm, Amanda shares the story of her family’s relocation to Minnesota and the subsequent challenges they face as farmers, a family, and Mennonites. She tells how the first crop year was a huge failure and her father alone makes the decision to expand the new dairy in an attempt to recoup the losses. This memoir chronicles the years of struggle as Amanda and her younger brother Joseph seek to escape their father’s suffocating and controlling behavior.

Intermingled with the struggle on the farm is the effort to become an accepted member of the Minnesota Mennonite community. The change in Amanda’s father’s behavior and attitude during the first years in Minnesota alienates him and his family from others of the same faith. She shares a mix of emotions as she wrestles with the shame of her family’s standing with the Mennonites and the crushing weight of constant submission to her father’s misguided use of his God-given authority.

Amanda Farmer grew up on the farm and worked there with her family until the age of twenty-nine. She earned a master’s degree in nurse anesthesia. Farmer now lives with her husband on a hobby farm in southeastern Minnesota. They have one grown daughter.