Will the Real Mormons Stand Up and Sound the Alarm? 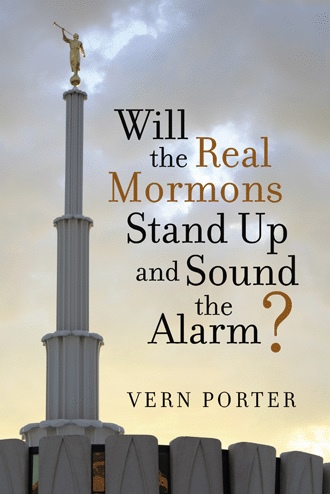 The Church of Jesus Christ of Latter-Day Saints is an influential church in the United States and beyond. Yet, it remains a mysterious entity to those who are not members. Now we find the church contains mysteries unknown to even those who call it their spiritual home.

In Will the Real Mormons Stand Up and Sound the Alarm? author Vern Porter shares his discovery of the potentially seamier side of the church. After nearly twenty years in the church, Porter was doing part-time missionary work when he ran across members obsessed with polygamy and racism. When he confronted them, the treatment he received led him to reexamine anti-Mormon accusations he had experienced from Baptists. For several years, he studied the Scriptures and history of the church, including the Journal of Discourses, a twenty-six-volume record of conference talks from the early 1850s to the mid-1880s. As he researched the church, it became obvious to him that its scholars and leaders had covered up details of Mormon doctrine and history from the church’s early days in Utah. Although he left the church for twenty-five years, he returned after experiencing some hard-to-forget dreams. Though most of his friends received him with open arms, some tried to drive him away.

In Will the Real Mormons Stand Up and Sound the Alarm? Porter pulls back the curtain and shares some of his real concerns about the Church of Jesus Christ of Latter-Day Saints, especially concerning more radical members and beliefs.

Vern Porter served a two-year, full-time mission for the Church of Jesus Christ of Latter-Day Saints—the Mormons—and was married in the temple. He has been a Sunday school teacher, scout leader, executive secretary, and one of the seven presidents of Seventy in a stake quorum of Seventy. He resides in Elk Grove, California.