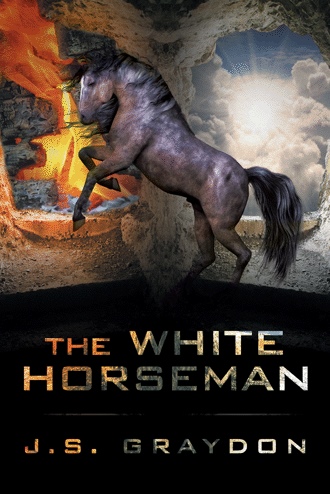 Ronan wasn’t a patient man on a good day. Having to pace himself with this motley procession was exasperating. He just couldn’t see the value of these eager but clearly unprepared troops. More like a troop of apes! Give me four or five strong abled lads and I could put a stop to all this nonsense. Of course, everyone’s intentions were well meant, but really, colorful caravans, crazy Elvin, a gibbering lunatic? Please.

“We are screaming our presence to anyone who cares to listen!” he complained to Gerhardt.

“That is so”, answered the old man as he gingerly walked next to Ronan, stabbing at the ground with his staff, leaning heavily on it as if a cane. “This prophecy involves all of us. These people –“he said glancing around, “- deserve to be here. They have left their homes and families to protect us from disaster! Besides,” Gerhardt confessed, “it was impossible to keep Gentle Wolf quiet. The high Council isn’t always known for its discretion”. It was no secret that each race, though supposedly meant to work together as a whole, tended to regard themselves as superior, and though forbidden, furtively tries to trump the others. When Gentle Wolf’s prophecy was delivered to the Council, each race began clandestine plans for preservation. News ran like wildfire throughout the villages.

“If the vision could have been contained it would have. But this news was not of pending drought or famine but of danger to their eternal salvation!”

“What do yer plan to do once we get to Malamoor Downs? Sic a band of ‘obgoblins on ‘em? If the rumors are right Ahriman ‘as bin using dark magic. What is your plan?”

“Quite simply to stop him”.

“Gerhardt,” sighed Ronan. He stopped the wizard by placing his hands on his friend’s shoulders, “stop playing games with me. What exactly do you intend?”

Glancing around, Gerhardt made sure no one was within earshot. He lowered his voice, “to be honest Ronan, Gentle Wolf’s visions have been murky at best. The Elders had him write it down to make them clearer. I, as an Elder, have seen his words, but without the benefit of actually showing you the written prophecies it has made our course of action difficult”.

Ronan’s heart jumped into this throat. “Are yer saying that yer dinna have a plan?” The disappointment and anger was so obviously clear on his face that Gerhardt felt the need to explain his self.

“Ronan, you must try to understand. What Ahriman is attempting is suicide. Our dimensions have never been in a conflict like this before. We have been essentially a peaceful world. To call upon the Apocalypse in order to master the two worlds is madness! And we feel that is precisely what Ahriman has become - mad. That he truly believes this can be without damaging himself is lunacy! If he manages to summon the White Horseman his spell cannot be undone. Eloah & Baalberith will not be stopped!”

“I’m not ginna allow us to walk right into an ambush. There must be a spell or something that could at least show us a clear understanding of what ‘e is up to. That way perhaps we can delay him long enough to try to reason with him”.

“I personally believe the man has lost his reason, he was on a slippery slope when I knew him. At first I thought his foolishness was just harmless pranks but now – “he paused, thinking back, “– now, with the hindsight of maturity, I can see that he was unstable even then. He’s a lethal mix of genius and corruption, he… wait!” He stopped in mid-thought as another came to him. “… there is a way to reconnoiter his compound. I can’t believe I didn’t think of it before! The water! That’s it!”

For the past few days the army had been loosely following what was known to the locals as Bogle Brook. It was a thin but steady river that wound itself throughout most villages and was used to supply the intricate well and aqueduct systems.

Excitedly, Gerhardt spoke with a confused and troubled Ronan. “Go get Ziah and Gentle Wolf and meet me by that large oak over there”. He pointed at an immense king oak that draped itself partially over the bubbly brook.

“Let everyone continue down to where the forest starts… and Ronan? Please be discreet what we’re about to do is nobody’s business but our own.” Ronan nodded silently and strode quickly to look for Ziah and Gentle Wolf.

when an ancient magical artifact is unknowingly found by a malevolent sorcerer who is hell-bent on razing both the realms of the Guardians and that of the Humans. He plans to summon forth the first messenger of the Apocalypse—the White Horseman.

In this world of sorcerers—both good and bad—there lay a prophecy of one human child, who could save both of their worlds from destruction. In a chain of events that will pull him through the veil that shields the dimensions from each other he will lead a motley band of warriors to the one being that can help them understand the puppet-masters that are raging their unseen war.

With the Immortals looking down, they guide him towards his goal—to destroy the mad sorcerer before the White Horseman can be summoned. For if the Horseman returned the time of humanity would be gone forever…

J.S. Graydon, originally from England, was raised with the superstitions and folklore that grew to be this novel. Magic was not only considered commonplace, but was told to be practiced regularly. The author brings this knowledge to the New World. J.S. Graydon now currently resides in Southwest Florida.