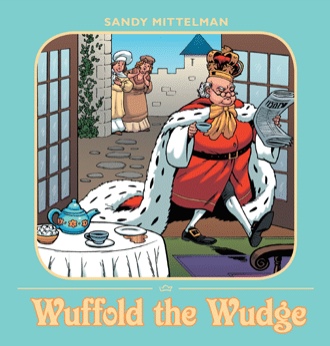 CHAPTER 1
In which Wuffold has a bad morning

Like so many other stories of this kind, this story took place once upon a time, in a far away wudgedom.
(What’s that? You don’t know what a wudgedom is? Well, it is very much like a kingdom - only quite a bit smaller.)
So: Once upon a time, terrible trouble came to the Wudgedom of Wygeria.
The trouble started, to be exact, at 9 o’clock in the morning.
It was then that a smallish, roundish, oldish man, with gold rimmed spectacles slipping off his nose, wandered happily into the courtyard of the palace. Besides his spectacles, he also wore a smile and a crown – the crown, because he was the High Wudge of Wygeria; and the smile, for the very same reason. (Well, of course he was also wearing his royal robes!)
Wuffold - for that was his name - had been High Wudge for years and years, and all through them he had smiled regularly and well. He had lots of practice.
At first, this morning was no different than any other morning. As usual, Wuffold bumped nearsightedly into the statue of Wifflepoof I - and he smiled. As usual, Wuffold tipped his crown and apologized to the statue of Wifflepoof - and smiled. And though the statue had - as usual - neglected to answer him, Wuffold, a kindly old fellow, kept smiling.
(It must here be admitted that Wuffold could not actually tell if Wifflepoof had answered or not, since he was also rather hard of hearing…)
By 9:05 Wuffold (still smiling) had arrived in the breakfast room of the palace, and by 9:10 breakfast had arrived there, too. By 9:15 the daily newspapers had been delivered. And at 9:16 Wuffold stopped smiling.

Befuddled but loveable, Wuffold has been ruling the tiny Wudgedom of Wygeria for many, many years. However, when a diplomatic crisis causes Wudge Wuffold to resign, he decides to send his twin daughters, Willi and Wanda, on a perilous quest to determine which one should inherit his throne. But there hasn’t been a successful quest in all of Wygerian history.

From the castle of the Wudgedom to the shores of Earth End, the two Wudgerinas travel in search of a magic, age-defying potion that each hopes will win her the Wudgedom. In the end, however, the rightful rulers are discovered in a most surprising place.

Wuffold the Wudge is a fairy tale for a contemporary audience. Using humor, irony, and occasional asides from the author, Wuffold the Wudge is an engaging tale created to appeal to children developing more sophisticated tastes. While enjoying the whimsical antics of Wuffold and Wilhemina, readers will be learning powerful lessons about self-esteem, vanity, and what things really matter.

Sandy Mittelman is a retired English teacher and librarian with an abiding love of stories and their ability to help us recognize ourselves. Although somewhat shorter than she would like, she is entirely reconciled to her gray hair. Her children bear no resemblance to the Wudgerinas in this book.