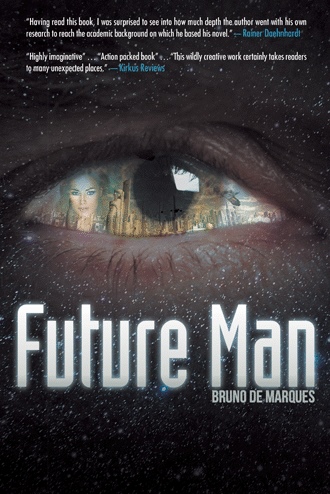 Dino is shocked. “So that’s what all those people, surely smarter than me, are doing these days? Making smart telephones?”

Voeggels turns to Dino. “They are not smarter than you.”

“That much is obvious,” Vincent says with a smile.

“If I recall correctly,” Dino says, “Coppels mentioned the Chinese were diverting significant resources toward their space program. So at least Chinese scientists are actively—”

“China is still playing catch up with the Americans and the Russians.”

Dino is intrigued. “What about that hunger for creating something that no one has ever done before? Something that most thought impossible?”

“And creating something greater than ourselves that will serve all people?” Voeggels asks. “I fear those feelings just aren’t there anymore. Especially in recent generations,” Vincent “I see only a glimpse of that in those who develop smartphone applications.” Voeggels exhales. “The smart telephones again.”

“Our ambition defines us. And like animals born in captivity, recent generations seem to have learned to live in a cage and, I dare say, are having trouble seeing beyond it. They seem to live for the next season’s fashion, their next vacation, the next online game, or next-generation console—”

“For sex, I imagine,” Voeggels adds.

“Exactly. For whatever immediate pleasure or hype that catches their fancy. They don’t try to see beyond their shallow horizon. I mean, it’s all good. But it saddens me.”

“Do you think we can tell them? Warn them?” Dino asks.

As Vincent De Marcos watches a barge carry off a supersonic airliner to a museum in November 2003, he can’t help but think: The old boat still has a place in the world, but the Concorde apparently does not.

For the first time in the history of transportation, distances have become longer, and it feels like a funeral—only they are burying the future instead of a person.

No one seems to care, but sixteen years later Vincent still can’t help thinking about what the world has lost. To him, we still live in the past, and smartphones and tablets, as amazing as they are, will never change that. He struggles to focus on work at the Rigor Insurance building and looks forward to sometimes flirting with his friend, the beautiful Nuria Guzman.

It’s only by chance that he sees a presentation about the supposed existence of a forgotten Jewish community composed of elite, scientific thinkers that have been hiding in Antarctica since World War2.

Throwing caution to the wind, he decides to search for the community, even though it means risking his life. If he finds it, he’ll be forced to decide whether or not the scientists can be trusted to help the world live up to its promise in Future Man.

Inspired by the findings of historical researcher Rainer Daehnhardt who, in 2005, was awarded “Top One Hundred Scientist 2005” by Cambridge, for his historical scientific research, namely his findings on the activities in Antarctica by the German of the 3rd Reich in the 1930/40s and the secret operations, led by allied forces - especially the U.S. - to find them, long after WWII was over.

He has published 80 books and over 600 scientific articles.

Bruno De Marques was a consultant for Accenture and a marketing professional for a large bank (BPI) before becoming a writer. He lives in Portugal with his wife, Rita, and his two daughters.