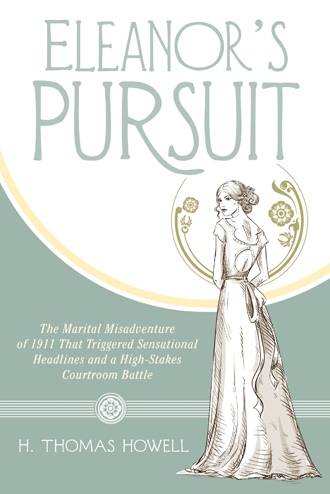 Over time Eleanor counted herself among the blue-blooded aristocracy of Virginia. Drawn to a professional career in acting, she adopted the stage name of Eleanor Pendleton. After she had established her own credentials on Broadway, she gave a full-page interview published March 3, 1912, in which she unveiled her “long and distinguished pedigree” to a nationwide audience:

She has a long and distinguished pedigree. Her real name is Miss Davidson, her home is in Baltimore. Mina Pendleton, her father's mother, was considered the greatest beauty in Virginia and her mother, Ella Tiffany Shriever [sic], was at one time the Belle of Baltimore. Ministers and senators she numbers aplenty among her kinsmen, and she herself is a descendant of revolutionary warriors. Edmund Pendleton was head of the family. George H. Pendleton, Senator and minister to Germany, Gen. W. L. Pendleton, soldier and divine, the late John S. Pendleton, member of Congress from Virginia, Gen. Edmund Pendleton Gaines, Gen. John P. Magruder, Margaret E. Ellis, who was descended from the Marshalls, Fergusons and Vivians -- all these were her relatives. Her father was first lieutenant under Robert E. Lee, and a most intimate friend of the southern hero, Harry Gilmor. Some of the bluest blood of the South flows in Miss Pendleton’s veins, and she is extremely proud of it.

By engaging in this recital of genteel name-dropping, Eleanor Pendleton was claiming a heritage that was both fanciful and real. It was passed down to her as cheerful folklore. She was an actress, not a genealogist. Her dramatic flair may have garbled some of the details (her father was certainly not an officer and never served in a unit commanded by Robert E. Lee). Nevertheless, regardless of embellishments and errors, Eleanor’s pride in her Virginia ancestry was genuine enough to become the driving force of her ambitions. Blue blood was about all she inherited. “My story is the old one of the blue-blood family in reduced circumstances,” she explained in her interview, with a little deprecatory laugh. Her revered Virginia ancestry compensated for her lack of wealth and justified her enhanced sense of entitlement. If she wanted to marry a millionaire, it was because no lesser suitor could have been worthy of her exalted station. The image that she cultivated became the armor that shielded her against the harshest of theatre critics, trial lawyers, and other detractors who sought to derail her rightful claims to greater fame and fortune. Eleanor Pendleton was sought out for interviews by the press because she had established herself as a recognized authority on millionaires and their sons and the reasons why they were attracted to women of the Broadway stage. Her authority was derived from extraordinary personal experience. The actress had married an Ivy Leaguer, the youngest son of Norman B. Ream, one of corporate America’s wealthiest financiers. The marriage generated sensational headlines coast-to-coast, when the man she married suddenly disappeared. For Eleanor Pendleton and Louis Marshall Ream, it had been a case of love at first sight. She was tall, blonde and beautiful. He was tall, dark and handsome. On September 1, 1911, following a torrid summer courtship, they had eloped to Hoboken, New Jersey, where they were married by a justice of the peace. They shared five happy days of domestic bliss. Then Louis left his bride’s New York apartment and went to the Connecticut mansion of his parents to allay their concerns and obtain their blessings. Louis said he would return the next day, but failed to do so. His mysterious disappearance and Eleanor’s unshakable faith in his promised return captured national media attention and sparked the public’s imagination over what was happening to their storybook romance.

What Eleanor did not understand was her father-in-law’s deep-seated aversion to the theatre. Norman B. Ream was the product of a bygone earlier generation which had been exposed to the mid-Victorian teachings of evangelical clergymen. They believed that acting was a form of deception and that the living of a lie was the work of the Devil. To them actresses in the exercise of their stage roles engaged in flirtation, kissing, touching and other forms of sinful behavior that led to further immorality, back-stage and offstage. They were regarded as unfit for membership in respectable society. To Norman B. Ream, and many of his contemporaries, it was unthinkable to admit an actress to his family circle  When he learned that his youngest son had eloped with an actress, the father was determined to put an end to the marriage.

Instead of a happy reunion with Louis, Eleanor received instead a visit from William W. “Uncle Billy” Miller, the Wall Street lawyer for the elder Ream, and a curt message that the marriage was over and that she should obtain an attorney of her own. Eleanor was devastated and burst into tears. Several weeks later Uncle Billy met privately with the lawyers she had retained and they reached a settlement that she barely understood, premised on the fact that nobody had obtained a New Jersey marriage license. The resulting legal proceedings were conducted in a secret location and the press was obliged to speculate over the outcome. Was the couple forced to separate? Had they divorced? Was their marriage annulled? Were they reunited and taking a delayed honeymoon? For each possibility there was a different news article.

Eleanor resumed her acting career and, just before her triumphant return to the stage, she gave the interview that added celebrity status to her fame. She spoke for thousands in show business when she denounced archaic stereotypes and appealed for public acceptance of actors and actresses as members of a hard-working and respectable profession. Titans of the newspaper industry, including William Randolph Hearst and the sons of the late Joseph Pulitzer, sought her opinions and published them at length. Following the 1915 death of her father-in-law, Norman B. Ream, when Louis became heir to millions, Eleanor obtained a new lawyer and challenged openly the validity of the secret legal proceedings that had ended her marriage. Despite smear tactics whose lurid revelations were calculated to destroy her reputation, Eleanor won repeated courthouse victories that were as dramatic as anything she had ever performed on the stage. News coverage of her case captivated the American public like no other episode of those bygone times. She obtained justice for herself, but also for other women similarly situated. The court decision she won was an important precedent striking a blow against an incipient national scandal – the ease of annulling marriages on the basis of parental disapproval.

This is the true story of Eleanor Pendleton, as never told before. Its ingredients

may found be found in century-old newspaper articles that once fascinated millions of Americans. A story that intrigued an earlier generation of readers is as relevant today as it was when Eleanor Pendleton was performing on the stage of life. Her story may be stranger than fiction, but should be all the more interesting because it is true. This book is the first to tell her story. It probes beneath the surface of the sensational headlines of yesteryear.

When Eleanor Pendleton met Louis M. Ream in 1911, it was love at first sight. She was a Broadway actress known for her beauty and dancing ability in musical comedy productions during the early twentieth century. Louis was tall, dark, and handsome and, as she soon discovered, the youngest son and presumptive heir of Norman B. Ream, one of America’s wealthiest men. The problem for Eleanor, as she learned after eloping with Louis, was her father-in-law’s deep-seated aversion to the theatre; he regarded all actresses as disreputable. After an overnight trip to seek his father’s forgiveness and understanding, Louis disappeared.

A blend of history and melodrama, H. Thomas Howell’s Eleanor’s Pursuit offers the biographical legacy of Eleanor Pendleton. It looks beneath the sensational newspaper coverage of 1911 to explore the confrontation between father and son and Eleanor’s anxious vigil while awaiting the return of her husband. When Ream’s lawyer arrives at her apartment instead of Louis and informs her the marriage is over, Eleanor collapses in disbelief. The lawyers take center stage, displacing the lovers.

Chronicling one of the biggest celebrity newspaper stories of its day, Eleanor’s Pursuit follows the secret deal-making sessions, the stage-managed travesty of justice, and the ultimate courtroom battle. These events come to life as the witnesses and lawyers reveal the private details in their own words. Howell also tells how the public reacted to the story as it unfolded. With surprises at every turn, this biography explains the exceptional final stage of Eleanor’s pursuit.

H. Thomas Howell graduated from Princeton University where he majored in history and was correspondent for the New York Times. He earned his JD degree at Yale Law School. After serving as an army officer, he practiced law for forty years in Maryland and the District of Columbia. He is a fellow of the American College of Trial Lawyers. A former trustee of the Maryland Historical Society, his publications include twelve volumes on family history and genealogy. Married, with three grown daughters, Howell lives in Lutherville, Maryland.