Football vs. Music as an Educational and Community Investment 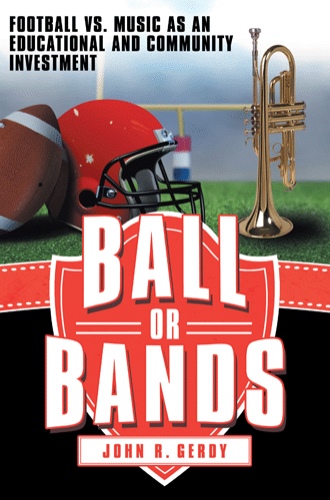 Picture this. A magnified image of a cross section of the human brain. The image shows hundreds of tiny brownish bits. These bits are toxic proteins, called tau, that form after brain trauma.  Tau can inhibit cellular functions in the brain, leading to depression, dementia and amyotrophic lateral sclerosis (better known as Lou Gehrig’s disease) and chronic traumatic encephalopathy (CTE), a degenerative brain disease.

The first image is of the brain of a former football player. The formation of the tau are the result of hundreds, if not thousands, of repeated hits to the head. These violent hits, in effect, shake or “scramble” the brain, flooding it with chemicals that deaden cellular receptors and tear neural connections linked to learning and memory. In short, the connections necessary for optimal brain function and development are being shaken loose.

Recently, there has been an increasing amount of discussion regarding how football programs, from the NFL to Pop Warner football, are attempting to manage “concussion risk.”  Without question, the revelations of the serious consequences to brain health and function that result from the repeated hits to the head sustained in football have taken the debate regarding the role of football in our culture to a new level. While most of the debate has centered on the NFL’s efforts to mitigate those negative effects, the significance of the issue as it applies to our nation’s educational system, particularly our high schools and junior high schools, is far more consequential. Specifically, we now have to give serious consideration to the question of whether the potential human costs to children’s and young adults’ health have become too great for an educational institution to assume.

The recent revelations regarding football and brain trauma have served to draw attention to, and increase dialogue about, the role that it plays in our educational system. But make no mistake about it: This is a dialogue that is long overdue, the brain trauma issue notwithstanding. Concern regarding football’s impact on academic values and the ability of schools to meet their educational mission has been growing steadily over the past several decades.

This book, however, is not about football and music specifically but, rather about education.  It is about community values as reflected through educational policy and institutions. Should our educational institutions be sponsoring activities that deaden and destroy brain cells and impair brain function? Should we continue to invest significant resources in football rather than, for example, music, which strengthens and develops neural connections and enhances brain function?

In a perfect world, all extracurricular activities would be fully funded. But with politicians and education leaders making it perfectly clear that for the foreseeable future education funding will be significantly reduced, it’s painfully clear that we no longer live in a perfect world.  That being the case, school districts will be forced to engage in the very difficult debate regarding how to allocate increasingly scarce extracurricular dollars. In such an environment, the fundamental question is which extracurricular activities garner the best educational return on investment?

But why the comparison of the brain on football versus the brain on music? Traditionally, the analysis of extracurricular spending in our schools has focused on the choice between elite, interscholastic athletics and programs in the arts. While many resist the notion of directly comparing the relative values of sports and the arts as educational resources, the fact is, when program cuts are required, priorities must be set and choices made. And the field upon which the battle over funding priorities will be played is the area of extracurricular activities, specifically, athletics versus the arts. Without such comparison and evaluation, it’s impossible to determine which investment is more effective.

Why football and music? Because in most schools, football consumes a disproportionate amount of resources in the form of money, time, effort and emotion. And despite it’s being a small piece of the overall school budget, its impact on the school and community is disproportionately high.  I’ve chosen music simply because I am far more knowledgeable about music than theater, dance or the visual arts.

This debate cannot take place in a vacuum. Because the role of our educational institutions is to respond to the social and economic challenges facing our society by educating our populace to be able to effectively meet those challenges, the debate must occur against a larger backdrop. Specifically, there are three major constructs that must be considered.

First, standards regarding what constitutes an education worthy of the twenty-first  century and, as a result, the expectations on our schools to effectively deliver that type of education are rising dramatically. Second, those standards are vastly different from those that have driven educational policy and priorities of the past. And finally, there is the cold, hard reality that schools must meet these rising standards and expectations in an environment of declining funding and resources, a trend that does not appear to be abating.

These constructs will define and influence our response to the fundamental challenge upon which we must execute effectively if meaningful education reform is to be achieved. Specifically, we must be more efficient with our resources by developing curricular and teaching strategies that are more effective in instilling in students the skills necessary to succeed in the information-based, interrelated, global economy and world culture of the twenty-first century.

Further, this discussion must take place against a background that recognizes the fact that America’s economy has changed from one based on industrial might to one based on technology, creativity, collaboration and innovation. That being the case, what does this mean as applied to educational funding and priorities? How will it impact our efforts to structure our schools and educational curriculums to prepare our children to succeed in this changing and increasingly competitive world economic and geopolitical environment?

In a perfect world, all school extracurricular activities would be fully funded. But with all indications being that future education funding will be significantly reduced, it’s clear we no longer live in a perfect world. As a result, school and community leaders, as well as parents, will be forced to determine how to allocate increasingly scarce extracurricular dollars, particularly in the areas of athletics and the arts. In such an environment, the fundamental question is which extracurricular activities garner the best educational return on investment.

These decisions must be made with the recognition that America’s economy has changed from one based on industrial might to one driven by technology, creativity, collaboration and innovation. What does this mean as applied to educational funding and priorities? How should it impact efforts to structure schools and educational curriculums to prepare our children to succeed in this rapidly changing and increasingly competitive world economy and integrated global community?

To successfully meet these challenges, parents, education policy makers and community leaders must be fully informed to enable them to approach these difficult decisions with a more thorough understanding of the issues and impacts these activities have on educational and community outcomes.

To that end, in Ball or Bands, author John R. Gerdy draws not only on relevant research and data but also his extensive experience in both worlds. The result is a thoughtful, thorough and clear-eyed comparative analysis of the educational value of football versus music programs in providing our children an education worthy of the 21st century.

John R. Gerdy is founder and executive director of Music for Everyone. A former all-American and professional basketball player, he served at the NCAA and as associate commissioner of the Southeastern Conference. He is author of Sports: The All-American Addiction and Air Ball: American Education’s Failed Experiment with Elite Athletics.