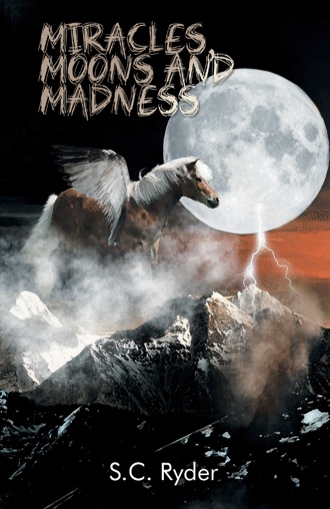 That fall just before his birthday, he took off again. He spent two days without speaking, just sitting, and then moved into the spare room. He wasn’t working much, not doing anything on the farm, just sitting. He said he was leaving. He spent another day packing, sorting clothes, muddling around with his stuff. I asked him where he was going, tried to talk to him. He wouldn’t answer. That night I tried again to talk to him. He was laid on his bed, just staring. Finally, he looked at me and said, ‘Getting the fuck out of here, why would I want to be with something like you.’ The look on his face was hate and disgust. I went to bed alone and cried.
The next day he got up and spent a few hours getting his stuff together. He didn’t want breakfast. He wasn’t hungry. I tried again to get him to stay. He lugged his stuff out of the house and was leaving but the truck wouldn’t start. A couple of hours later he got it going. I tried to talk to him again. He just sat hunched over the steering wheel, the engine running, staring at the floor. I knew I was going to cry so I turned to walk away and he roared off, the truck blowing blue smoke all the way down the road. I didn’t think I would ever see him again.
A friend had been staying in the guest cabin, he offered to get supplies from town, we still had only the one truck which he had taken, and sick to my stomach, the farm was still in his name only. The only way to have added my name to the property was to catch up on the maintenance lien for his son which we hadn’t had the money to do. This time I freaked. I really didn’t think he would come back. A hundred animals to feed, nothing legally in my name, and who knew what he would do now.
I called my friend the next day. The same one I had called the year before. She was as always there for me. She had also been telling me for a long time to leave him, she knew someone with bi polar and Nick was just like him. They don’t change she said. How could I walk away from everything with nothing and leave behind all those animals and hope that Nick could take care of everything if he did come back when he couldn’t even look after himself right now. Besides, I honestly didn’t think he would be back.
She came down the next day, with two friends. They brought bags of groceries for me and the animals, they bought a bunch of stuff I was selling so I had cash, and bought the majority of the laying chickens. There would be no way I could make egg deliveries without a vehicle and she said she had been looking for chickens and was going into the egg business anyway so may as well buy mine. What an awesome friend. After she left it hit me how alone I was again and I wondered if this time it was permanent.
The next morning Nick phoned and wanted to come home. He had only driven two hundred km. He was home by afternoon, his mood was good, and he said he knew this was where he wanted to be and with me and that it was forever and would never leave again. He never offered a reason for why he had to leave and I didn’t push it. It would have led to a fight and not likely any type of answer anyway. He never had answers and never wanted to talk about things. That morning before he came home, I had phoned about finding a counsellor in town, but we apparently needed a referral from a doctor and the doctor still didn’t think there was anything wrong with Nick.
The friend in the guest cabin had his parents visit from Europe. It was Nick’s birthday a few days after he got home, and we had a party for him. It seemed to go okay and he seemed happy. A couple of days later he told me that after everyone left, and I was asleep, he had walked over to a cabin in the bush a little ways from home, took a gun with him and thought about shooting himself. Thankfully he didn’t but it left me shocked at how miserable he really was. Would the doctor like to explain this one?

When S.C. Ryder first met Nick, she immediately fell in love with his smile, his sparkling blue eyes, and his outlook on life. Drawn together by their shared passions for dogs, walks, rocks, gold, and old mines, it was not long before S.C. and Nick would fall in love and move to an isolated, primitive house on farmland in Northern Canada without any idea that eventually a challenge bigger than them or anything they had ever experienced before would loom over their lives and change everything.

As a need for a steady income drove Nick to seek work with a Mennonite farmer, S.C. details how she took over the duties maintaining their farm. But as Nick slowly began spending more time away, S.C. began to notice disconcerting changes in his personality. Something was wrong inside Nick. As financial challenges plagued the couple and Nick’s anger transformed into physical aggression, S.C. shares how they embarked on a desperate quest to find out what was wrong with him—a journey that would result in a disastrous combination of misdiagnoses, wrong medications, and inadequate therapy.

Miracles, Moons, and Madness is the true story of a relationship torn apart by mental illness as two young people in love attempt to battle the effects of bipolar disorder.

S.C. Ryder spends her life in rural Northern Canada walking, reading, writing, and caring for the numerous animals that reside with her. After losing the love of her life to mental illness, S.C. has found a new life purpose providing help for others in similar situations.